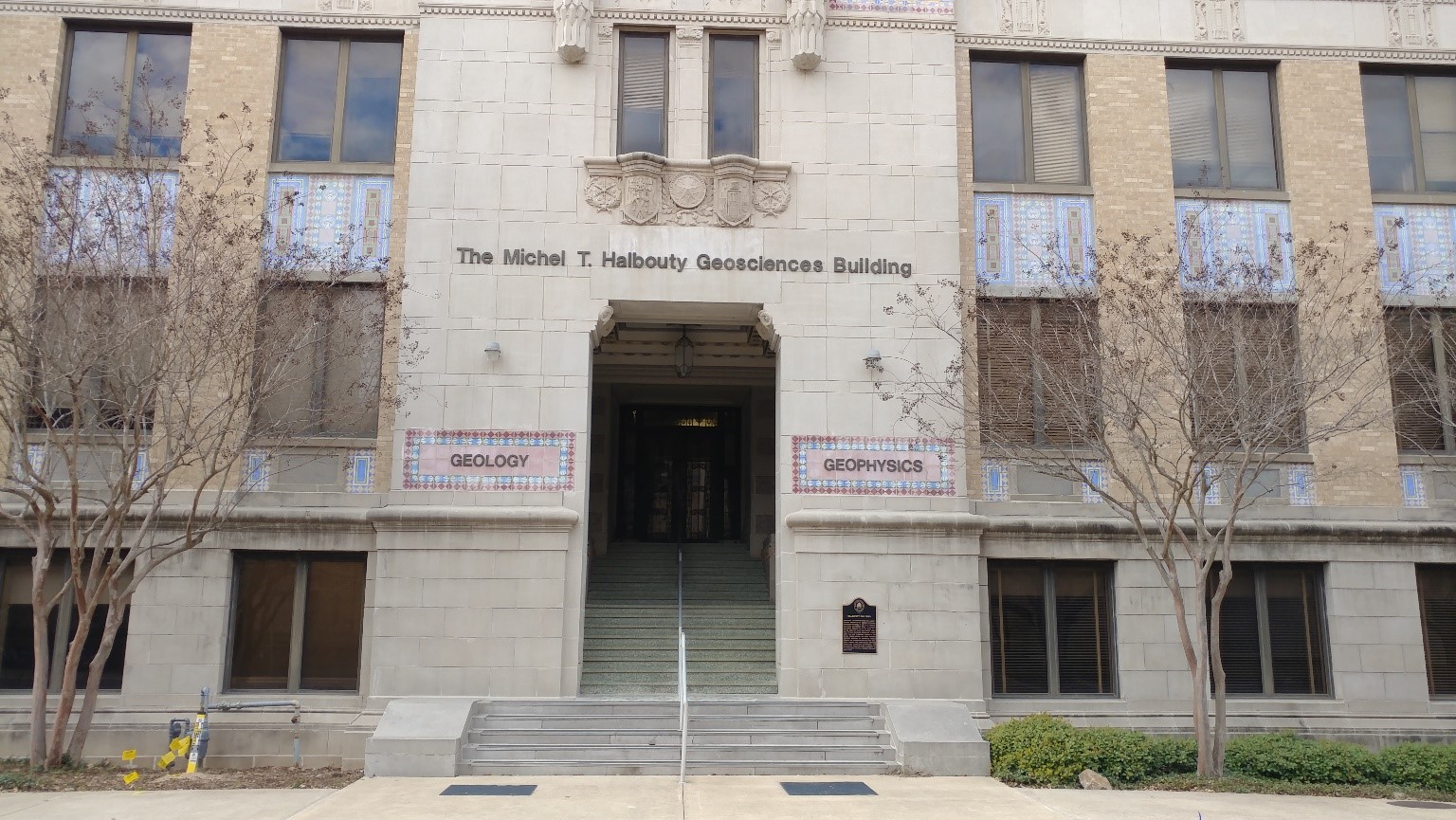 Built in 1932, the Halbouty Geosciences building is home to the department of geology and geophysics and is the center for tectonophysics for Texas A&M University. Designed by Samuel C. P. Vosper, another fellow Aggie, the building was originally called the Petroleum Engineering and Geology Building. Undergoing renovations in 1972 the building was updated and eventually named and dedicated after Michel T. Halbouty, an influential member of Texas A&M University’s past. The Halbouty Geosciences building is not only a building dedicated in remembrance of Michel T. Halbouty, but it is also a reminder of the rich history of the Geology and Petroleum Engineering department at Texas A&M University.

In 1932, the building was built as an expansion of the growing Geology and Petroleum Engineering departments at Texas A&M University. Samuel C. P. Vosper, chief designer with the College of Architecture at the time, was in charge of designing the building along with 9 other buildings that can be found on campus. The building was magnificent in its design and its representation of the culture and history of these two departments, it was an automatic landmark. The building stood for more than just a classroom. It was built as a vessel for communicating the many important events in geology and Texas A&M’s history.The building contains many details such as castings of seashells, pebble mosaics, Mexican tile and intricate designs.

Initially, the building featured a large tower above the recessed doors of the main entrance which was what made this building stand out. The main entrance features stone panels made of shells as well as petrified wood and two large doors with intricate ironwork also incorporating shells and other geologically relevant designs. Once inside, sitting straight ahead of the main entrance is a life size bronze sculpture of Michel T. Halbouty holding his first geophysical log from his first well. The main lobby is full of rich detail, bold colors and memorabilia, hosting many displays of minerals, rocks and many significant historical events and discoveries in the subject of Geology and Petroleum Engineering. The walls were composed of different types of marble, the stained-glass windows were colored and shaped to represent different minerals and the original ceiling was stenciled with geometric patterns and geologic symbols. Located on one of the side entrances is a heroic panel dedicated to the exploration of petroleum, and next to the building on the same lot is a working oil pump that serves not only as a display of history, but also as an educational tool used to teach and influence the many future generations of Petroleum Engineering students at Texas A&M University.

40 years later, in 1972, the first major renovations to the building had begun. This included the removal of the tower and the addition of the 60,000 square foot building connected to the back of the building. The interior was updated as well, removing some of the bold colors and stenciled ceilings, but these renovations had little effect the historical and cultural message this building represents. In 1977, the building was dedicated to Michel T. Halbouty and renamed to what we now know it as, the Halbouty Geosciences Building.

Michel T. Halbouty graduated with the Texas A&M class of 1930 with a master’s degree in Geology and Petroleum Engineering. Six weeks after graduating, he had his first success in striking a reservoir that was once deemed to be empty. Michel went on to achieve many great awards and accolades that resulted in the dedication of this building. Michel was a fine example of the petroleum engineering department and the many great traditions and morals of Texas A&M University. Michel’s life was dedicated to geology and petroleum engineering and the Geosciences building represents just that. The bronze sculpture of Michel located in the lobby of the Geosciences building depicts him with a proud posture and a look of determination. Both the building and Michel represent the famed and respected history of engineering and geology at Texas A&M University.

Michel T. Halbouty was a big component in Texas A&M’s history. He was the initiative behind the construction of the George Bush Presidential Library and Museum on campus, another building full of rich history and culture. It is through the Halbouty Geosciences building that we are able to physically see, interpret and commemorate the history of geology at Texas A&M University and the people involved in making it into the field it is today. As Michel put it, “It is the most beautiful building on campus and I am proud. The building was named after me, and is going to be there forever” 1.