DreamYard is an organization that is centered around providing a place for young people in the Bronx to use art as a means of self expression and a tool for social activism/empowerment. Additionally, DreamYard provides youth with academic enrichment services such as college guidance for high school students. DreamYard offers programs for children of all ages ranging from kindergarteners to high schoolers and offers various art programs from painting to sculpting to beat-making. Children consistently involved in DreamYard have a 98% high school graduation rate. The DreamYard mission is to "collaborate with Bronx youth, families and schools to build pathways to equity and opportunity through art" while "empowering those who join us to celebrate their culture and where they're from by creating instances of community" (DreamYard Handbook). The organization has grown into an entity loved and cherished by residents throughout the Bronx.

A mural created by DreamYard students on East 165th. (Photograph by author.) 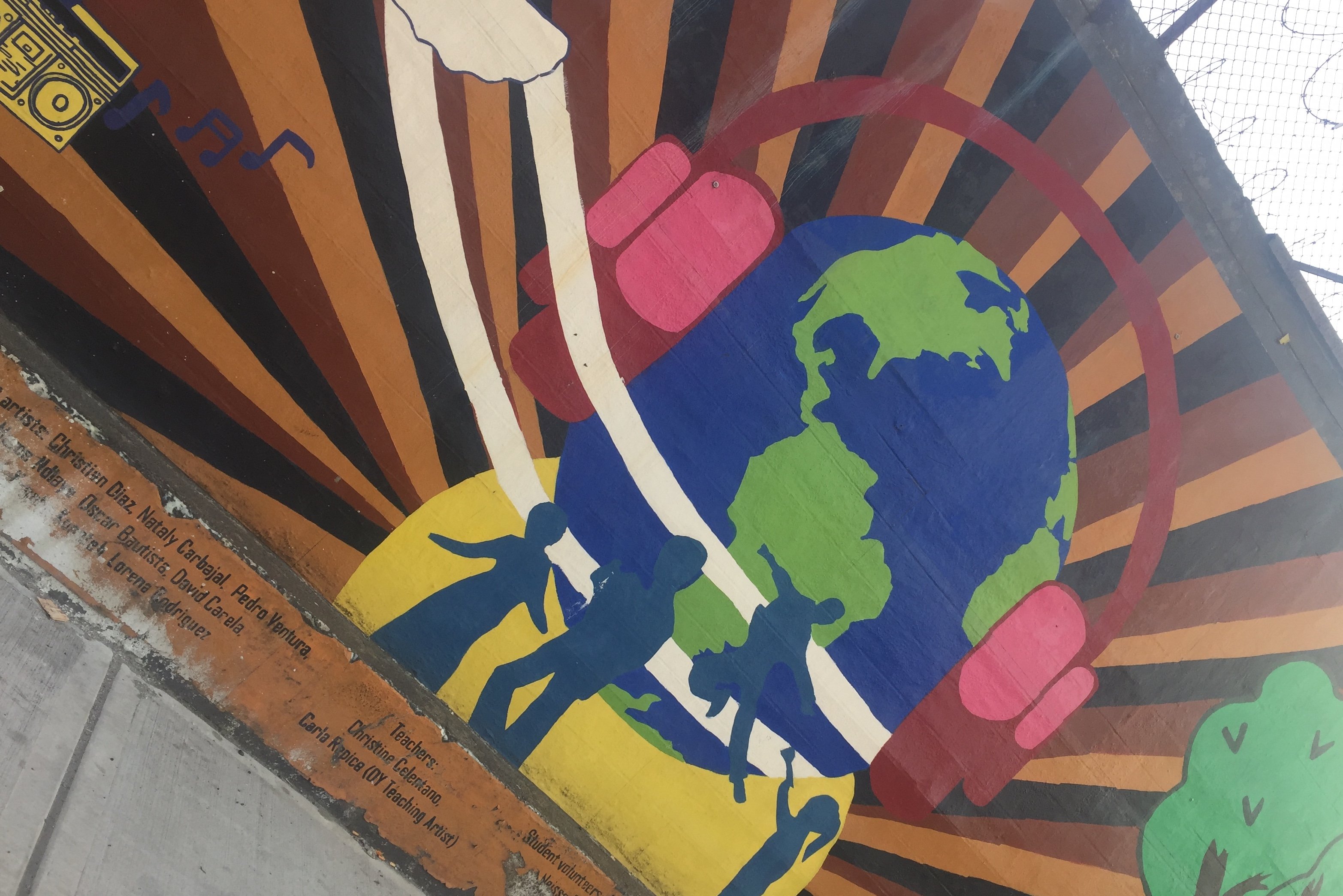 A mural created by DreamYard students on East 165th. (Photograph by author.) 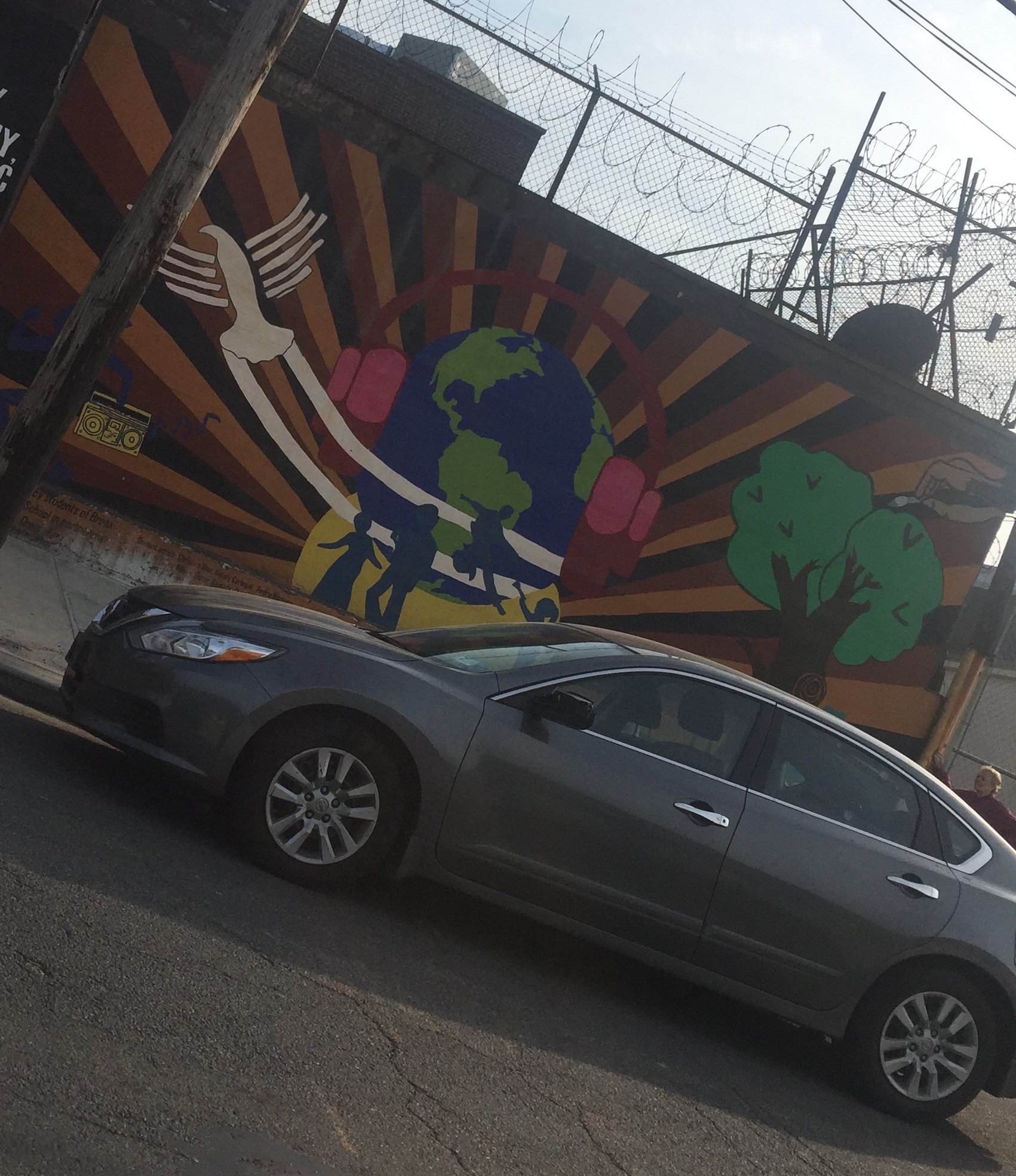 The idea for DreamYard arose in 1994 when Jason Dunchin and Tim Lord went to see a play written by children about a playground where dreams become real. This playground was, of course, called the "Dream Yard." Dunchin and Lord were both actors themselves and initially envisioned that the organization they would create was going to"recruit teachers from amongst their working artist acquaintances in New York and match them with schools whose funding for art education had been cut" (Frazier). However, by 1999, the two DreamYard creators decided to focus their program solely on the Bronx in order to maximize the positive impact that they could make. In 2006, DreamYard Preparatory High School opened its doors for teenagers in the Bronx. It was not until 2009 that the 1085 Washington Avenue DreamYard Art Center opened and became the home-base of DreamYard.

The 1085 Washington Avenue lot existed long before DreamYard stood on it. The first recorded building there was built on August 10th, 1848 by Andrew Findley who combined it with its neighbor, 1083 Washington Avenue, in order to create the large space that is there today. The earliest record of occupation for 1085 Washington Avenue is dated to November 21, 1941. It is an employment advertisement in the New York Times seeking a female stenographer to work at a firm called Plastex. Plastex described its business as  "gentile" intimating that they would not hire any employees who identified as Jewish. This is of note not only because discriminatory hiring practices were acceptable at this time in New York's history, but also because the area around 1085 Washington Avenue was occupied by many Jewish residents and businesses.

It is unclear when exactly Plastex shut down, but records show that from1967 to 1974 the lot was passed from one leasing/realty company to another. In 1974 a private business finally purchased the property. This business, called "You and Christ Temple Inc.," was likely a church. "You and Christ Temple, Inc." stayed in business for four years before foreclosing on August 8th, 1978. The lot was in custody of the city until the year 2000 when another realty corporation purchased it. On August 1st, 2006 the 1085 Washington Partnership LP (controlled by Bronx Pro Real Estate Management) bought the space. Bronx Pro Real Estate management is described as "a unique, mission driven affordable housing developer." Peter Magistro, who is both the head of Bronx Pro Real Estate and DreamYard's landlord is described as "a soft spoken man and lifelong Catholic who became a developer because of his faith." Thus, there is still a hint of the religious embedded in the 1085 Washington Avenue location today.

Inside 1085 Washington Avenue, DreamYard runs nine different arts-oriented programs: MINIs, ACTION Project, BeatYard, Bronx Acting Ensemble, Bronx Art Collective, Bronx Poetry Project, Dance, Fashion, and Marker. In 2014, DreamYard launched an additional program entitled the College Access Program. Outside of 1085 Washington Avenue, DreamYard has collaborated with the New York City Department of Education to implement an "arts learning pathway" called the Bronx Arts Learning Community in which they partner with forty-five public schools to integrate DreamYard programs into school curricula. In addition to the NYC Department of Education, DreamYard has collaborated with a plethora of organizations including: The Ford Foundation, The Bronx Museum, Knowledge House, Lehman College, The Point, Per Scholas, Sustainable South Bronx, The New Settlement College Access Center, and WHEDCo. Some of DreamYard's external events to connect Bronx kids to the world around them are: “poetry contests between local kids and kids in other countries via Skype, poster making for political protests, supplying art work for parks and public spaces, painting designs on local apartment buildings, and running art festivals” (Frazier). The largest of these festivals is the Bronx Arts Festival that happens annually in June. DreamYard has made such an impact on its community that in 2012 the organization was awarded the 2012 National Arts and Humanities Youth Program Award by the White House in Washington, D.C.

An oral history project created to promote rich Bronx history and culture through the narratives of Bronx natives who know first hand what it is like to live and be apart of the community.