At the former Cape Fear Fair Grounds, roughly 135 yards northwest of the historical marker commemorating Babe Ruth's first professional home run in 1914 (which is located at the North Carolina Division of Highways facility on the corner of Southern Avenue and Gillespie Street in Fayetteville, North Carolina), Jim Thorpe also hit a home run there, four years previously, in an exhibition game. While purported observers of both home runs claimed that Ruth's traveled farther than Thorpe's, Thorpe's would actually be a "shot heard round the world."

Jim Thorpe posing with a bat in his hands 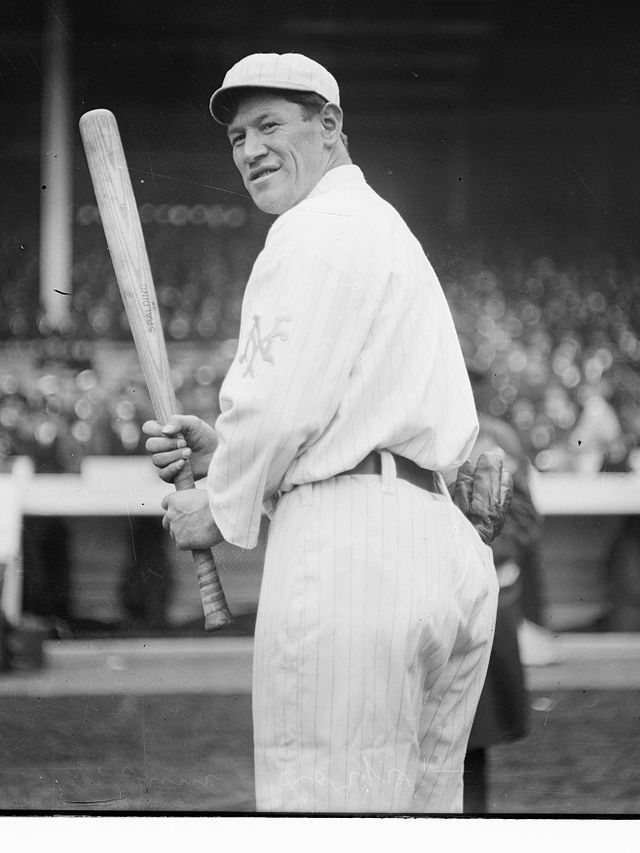 Jim Thorpe at the 1912 Summer Games 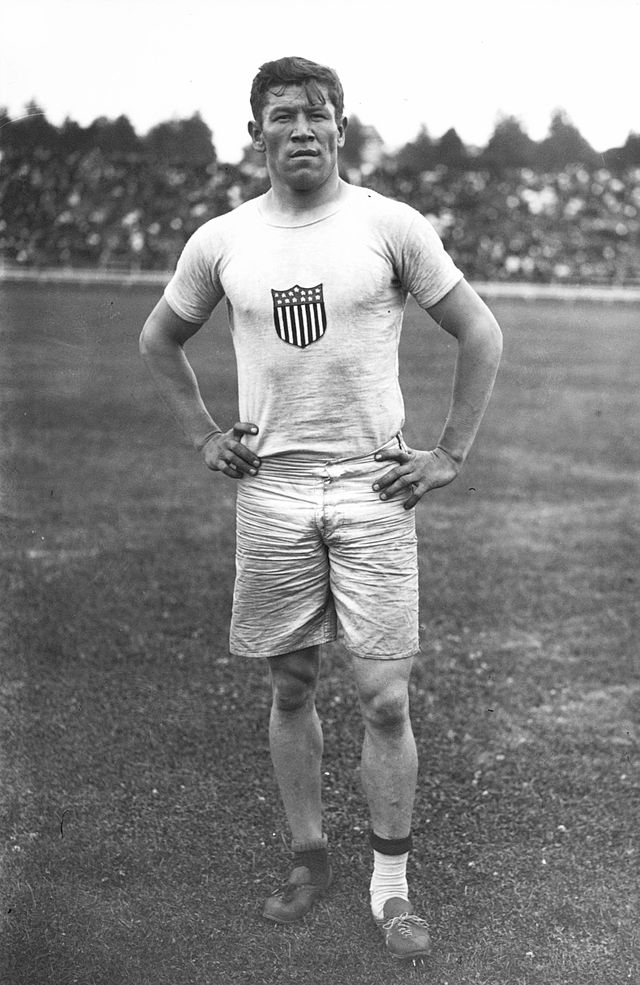 As one biographer of Jim Thorpe recounts:

James Francis Thorpe was born on May 28, 1887 in a one-room cabin near Prague, Oklahoma. Although there is much confusion on Thorpe's date of birth, this is the date according to his estate. He was born to Hiram Thorpe, a farmer, and Mary James, a Pottawatomie Indian and descendant of the last great Sauk and Fox chief Black Hawk, a noted warrior and athlete. Jim was actually born a twin, but his brother Charlie died at the age of nine. His Indian name, Wa-Tho-Huk, translated to "Bright Path", something that Thorpe definitely had ahead of him.

In 1904, Thorpe started school at Carlisle Industrial Indian School in Pennsylvania. The establishment offered American Indians the opportunity to gain practical training in over 20 trades, in addition to off-campus employment at local farms, homes or industries. Thorpe began his athletic career at Carlisle, both playing football and running track. He was triumphantly selected as a third-team All-American in 1908, and in 1909 and 1910 he made the first team. Iconic football legend Glenn "Pop" Warner coached Thorpe at Carlisle and was able to see the young phenomenon evolve in his pursuant excellence with athletics.

At the tender age of 24, Thorpe sailed with the American Olympic team to Stockholm, Sweden for the 1912 Olympic Games. Remarkably, he trained aboard the ship on the journey across sea. He blew away the competition in both the pentathlon and the decathlon and set records that would stand for decades. King Gustav V presented Thorpe with his gold medals for both accomplishments. As stated in Bob Berontas' "Jim Thorpe, Sac and Fox Athlete": "Before Thorpe could walk away, the king grabbed his hand and uttered the sentence that was to follow for the rest of his life.’Sir,' he declared, 'you are the greatest athlete in the world,' Thorpe, never a man to stand on ceremony, answered simple and honestly, 'Thanks King.'"

Thorpe's glorious Olympic wins were jeopardized in 1913 when it came out that he played two semi-professional seasons of baseball. The Olympics Committee had strict rules about Olympians receiving monetary compensation for participating in professional athletics. Thorpe, who stated he played for the love of the game and not the money, was put under the microscope. Ultimately, it was decided that his baseball experience adversely affected his amateur status in the track and field events. His name was removed from the record books and his gold medals were taken away.

Thorpe moved on after the Olympic ordeal and signed to play baseball for the New York Giants. He played outfield with New York for three seasons before relocating and playing with the Cincinnati Reds in 1917. He played 77 games with the Reds before finally returning to the Giants for an additional 26 games. In 1919 he played his final season in major league baseball, ending on the Boston Braves team.

During much of his baseball years, Thorpe was also immersed in professional football. He played for the Canton (Ohio) Bulldogs from 1915 until 1920 and the Cleveland Indiana (Indians) in 1921. In the years following, he organized, coached and played with the Oorang Indians, a professional football team comprised completely of American Indians. Additionally, he was instrumental in forming the American Professional Football Association, and eventually became the president of the group. Through the years, the association evolved into today's NFL. In all, Thorpe played with six different teams during his career in pro football, ending with a stint with the Chicago Cardinals in 1929.1

The stripping of Jim Thorpe of his gold medals, and of his amateur status, happened on account of his having played professional baseball in the Eastern Carolina League for Rocky Mount, in 1909 and 1910.  He received decent wages for the day, reportedly as little as US$2 ($51 today) per game and as much as US$35 ($886 today) per week, but it was scarcely worth the loss of the Gold(s). The real shame, of course, was that many college players of the day played professionally but used aliases to avoid detection, unlike Thorpe, who was nationally known.