This is the site of the former headquarters of the Athens Ku Klux Klan #5. Active during the 1920s and '30s, the Athens KKK drew a membership of hundreds and broad support from Athens' white community. Along with the nation-wide "Invisible Empire" of the Klan, the Athens chapter promoted anti-immigrant, anti-Catholic, anti-Semitic, and anti-feminist views through rallies, political activity, and vigilantism. The Klan maintained its headquarters at what was then 133 1/2 Clayton Street during the late 1920s and 1930s. The original building is no longer standing.

Hood and patch from the Athens KKK. 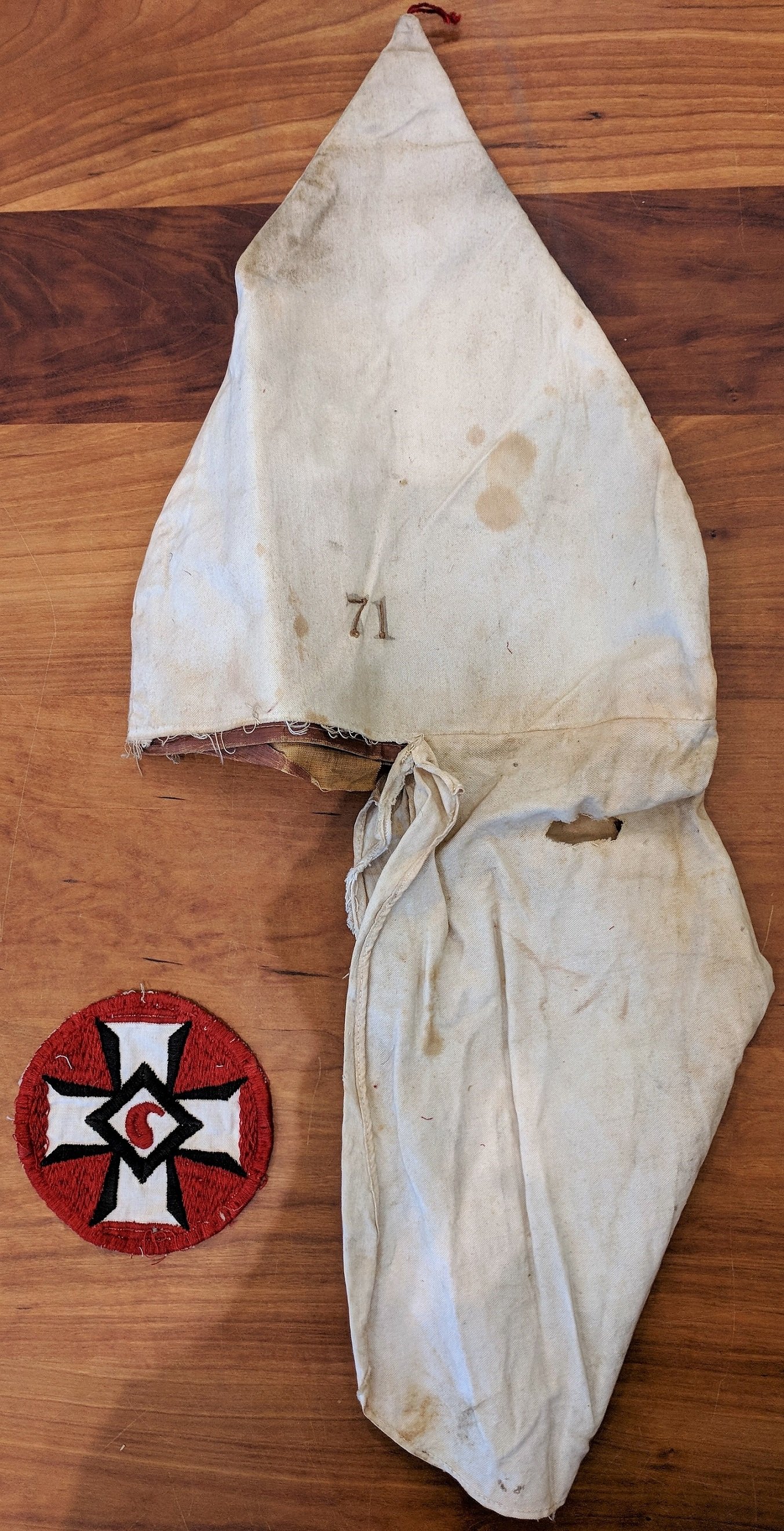 Banner promoting a public speaker that the Klan sponsored. 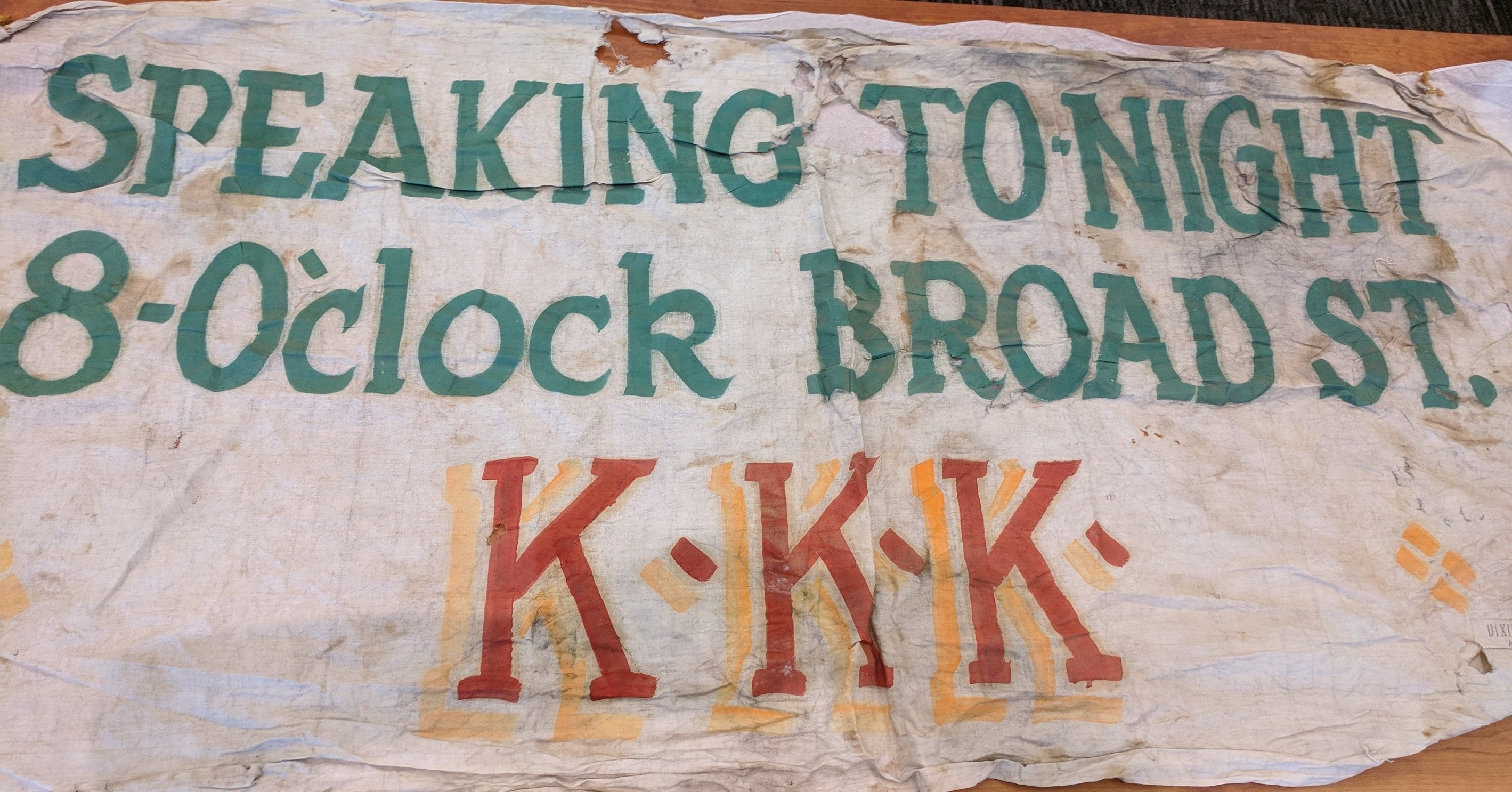 The Second Ku Klux Klan came into being on Thanksgiving night in 1915 in a ceremony atop Stone Mountain in Georgia. Unlike its post-Civil War cousin, this version of the KKK did not remain confined to the South, but spread its “Invisible Empire” across the nation and wielded tremendous political influence. During the 1920s, a third of adult men in Indiana claimed Klan membership, including large parts of the state’s political establishment. Rumor had it that President Warren G. Harding held a secret Klan induction ceremony in the White House. President Woodrow Wilson certainly screened the pro-Klan “Birth of a Nation” in the White House and heaped praise on the film.

During the 1860s and 1870s, the Klan focused its activities on maintaining African American subjugation in the South in the wake of abolition. The early twentieth-century reincarnation of the KKK had a broader approach. In addition to Black Americans, the KKK in the 1910s and 1920s also targeted Catholics, Jews, trade unionists, political radicals, feminists, and immigrants. The particular population targeted depended on local demographics.

Like many cities across the United States, a Klan chapter took root in Athens – Ku Klux Klan Chapter #5. By 1923, the organization claimed some 300 members in the city. The membership fluctuated between 150 and 300 throughout the 1920s, and their meetings regularly drew attendance of 75-100 people. The Athens Klan drew its membership largely from the population of white, middle-class men (women joined the sister organization, the Women of the Ku Klux Klan, which also had a chapter in Athens). The typical Klansman was middle-aged, married, and likely a father.  The majority of the Athens Klan supported themselves through clerical work, small businesses, or skilled trades.

Churches in Athens were heavily involved in the Klan—either their pastors were members, or they hosted Klansman during services, or cooperated with the Klan in evangelization. Reverend M. B. Miller of the First Christian Church (268 W Dougherty St) served as chapter president, and his assistant Reverend Jerry Johnson as secretary. The pastor of the West End Baptist Church also claimed KKK membership. Although never a large part of the membership, several civic leaders were also Klansmen, including two former mayors, president of the Chamber of Commerce, president of the Kiwanis Club, the chairman and four members of the Clarke County Democratic executive committee, a county commissioner, and more.

The Klan in Athens participated in a variety of activities. They partook in charity work—for those they deemed worthy of receiving aid. They campaigned to “clean up” Athens and enforced their vision of traditional morality Through their anti-vice activism, the Athens Klan vaulted into political power and elected a slate of local candidates in 1924. The Klan also undertook vigilante action, usually in the form of flogging men and women with leather straps during the night. Their actions targeted supposed violators of their code of morality and social hierarchy. Each incident instilled terror in the targeted population. Although Athens Klansmen may have participated in lynching, whether or not they did remains obscured, as newspapers universally reported that these events were carried out by “parties unknown.”

The Athens Klan maintained a number of headquarters in the city during its existence. Its first headquarters during the early 1920s was located at 459 ½ Clayton Street. They then moved from downtown to 1336 Prince Avenue in Normaltown. In the late twenties, they moved back downtown to 133 ½ Clayton Street, right next to the present-day location of the Globe and across from the Georgia Theater. Although the Klan operated as a secret organization, the prominent location of their downtown headquarters demonstrates the level of openness with which they acted. Someone writing a letter could address it to “Ku Klux Klan, Athens, Ga,” and confidently expect it to arrive at the correct location.