The E.G Lewis civic center consisted of four prominent buildings. The City Administration Building, the Atascadero Grammar school (old printery building), and the Mercantile, which would later be known as the La Plaza building. Only the Printery and Administration building are left standing today. The mercantile acted as Atascadero shopping center. All businesses were contained within this building with parking for two hundred cars located outside. The electricity for the building ecen came from an underground line, a practice now required for commercial buildings. The building was 100 feet wide by 200 feet in length. The ceilings of the building were 12 feet in height. The Southern Pacific railroad ran close to the building so a spur track was used to deliver goods to the building. The track came right to the back door of the building. The La Plaza building had a 42,000 square feet floor plan. The building require 14 tons of reinforced steel, 1,400 cubic yards of gravel, 1,400 barrels of cement, 480,000 board feet of lumber, and 600 square feet of glass.

B&W photo showing the La Plaza (Atascadero Inn) with a large group of people seated at tables in front and standing on the balcony. Ca 1917 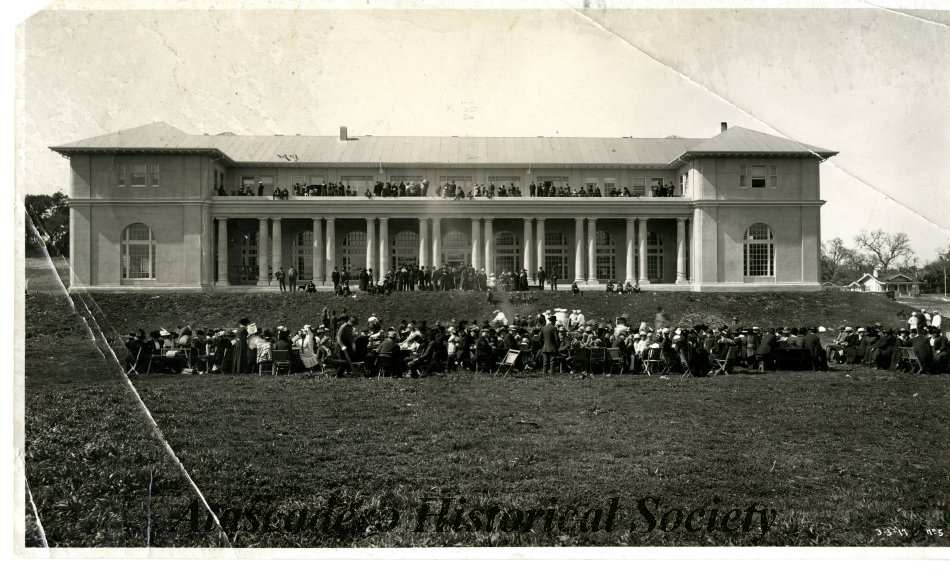 B&W photo showing the La Plaza (Atascadero Inn) with many cars parked in front. The Printery can be seen at left and the elementary school at right background. Ca 1917 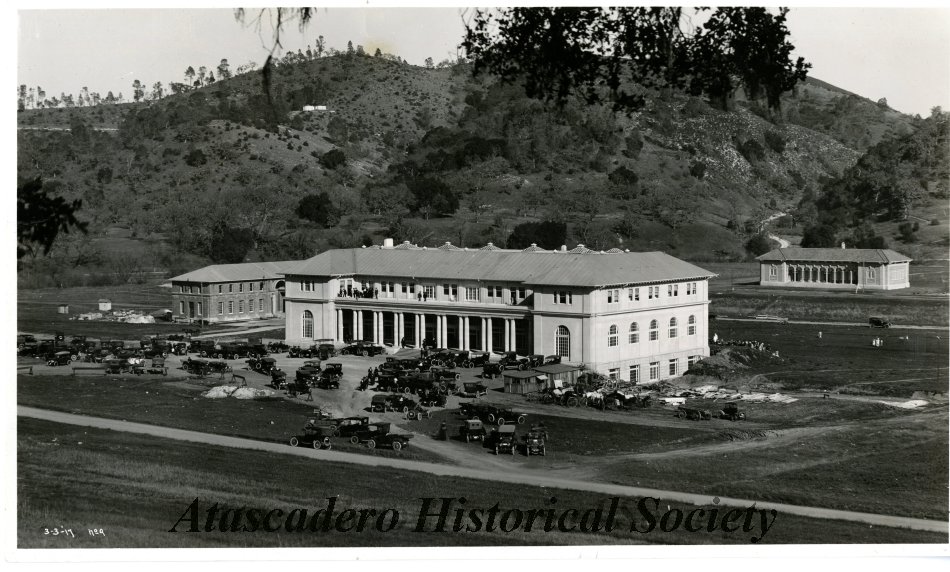 The buildings grand opening was March 3, 1917. Some of the businesses located in the building included a Grocery store, A hats and caps store, a jewelry store, a men's clothing store, a music store, an optometrist, and a billiards hall are just some of the shops in the building. La Plaza operated for a number of years providing goods to the colony. Business began to slow because of the creation of the state highway (El Camino Real today). Multiple businesses popped up along the route and Lewis was forced into involuntary bankruptcy in 1925. Seattle attorney Oscar Willett was appointed to oversee the bankruptcy proceedings. Willett sold all of the downtown buildings. Willett formed the Atascadero Development Syndicate and began clearing up the debt that had accumulated against Lewis. The ADS sold the La Plaza building to Fred Bartholomew of Los Angeles. He took a 15 year lease promising to pay $165,000 over the 15 year period. Bartholomew turned the building into the Atascadero Inn. The remodel cost $50,000 which included upgrading the existing rooms, creating a coffee shop, and a new dining room. By 1928, the Inn was prospering. On the morning of September 13, 1934, a fire broke out and completely destroyed the building. The flames could be seen for miles and a crowd gathered to watch the fire, even though it started at 2 a.m. All of the guests at the Inn made it out safely and onlookers helped the guests carry their belongings. The property the Mercantile/Inn stood on would be bought by the Atascadero School District in the 1960’s. Today, the Atascadero fine Arts Academy stands where the La Plaza building once stood. All that remains of the building are some steps, a fountain, and a rock retaining wall.

Edward Gardner Lewis purchased 23,000 acres of rolling hills from J.H. Henry in the Spring of 1913. The Atascadero Colony was created by Lewis who formed the Colony Holding Corporation to take care of promoting the Atascadero enterprise. It was referred to as a “dream city”. His motto was, “all the advantages of country life with city conveniences”. The La Plaza building was used as the first shopping center until E.G Lewis was forced into bankruptcy.

Allan, Lon W.. Atascadero: The Vision of One - The Work of Many. Atascadero, CA. Mike Lucas.

The City of Atascadero was founded in 1913 by Edward Gardner Lewis. His plan was to create a model community in his image. Lewis' plan was to create a civic center mall based on that of Capitol Hill in Washington D.C. He wanted the school to sit above the civic center on a hill, now called high school hill, because in Lewis' mind, education should be above all else. During the early years, many "colony houses" were built by newcomers to Atascadero. This tour outlines some historic Civic Center buildings, the old Atascadero Train Depot Location, as well as a few prominent colony houses.