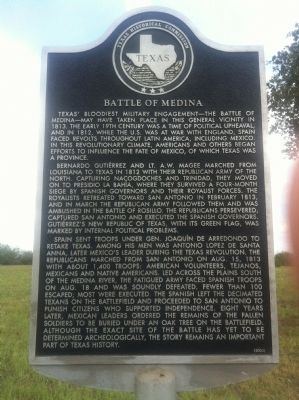 Augustus Magee resigned from the US Army to lead the Republican Army of the North, but would die before the battle of Medina 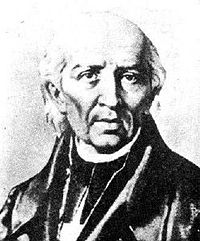 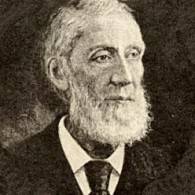 Santa Anna Fought at this Battle under the command of General Arredondo and would ironically become the leader of an independent Mexico. Then he would take his army into Texas to fight some of the same rebels who gained Mexico's Sovereignty 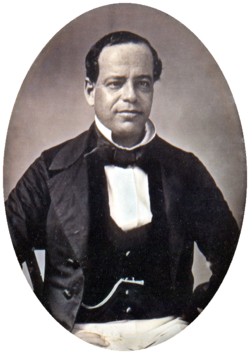 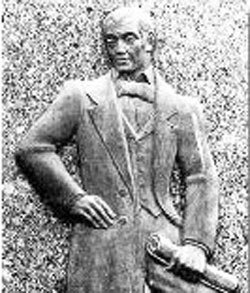 The battle was part of a larger battle for independence from the Spanish Government half the world away. The Spanish sent in their Royalist Army to quell the uprising of the Mexican rebels. At the same time, Americans were fighting with the British and Napoleon Bonaparte was making his conquests in Europe.

The Royalist Army was made up of Spanish as well as Mexican soldiers during this battle with a force of 1830 or so men. The Royalist Army was made up of riflemen, artillery, and cavalry. The Republican Army of the North, on the other hand, was not a professional army. This group of men was made up of Anglo-Americans, Mexicans fighting for independence, Indians, and Mexican-American Tejanos. This small army actually came out of the neutral territory in Louisiana and headed Southwest into Texas, collecting militiamen as it traveled. This is not surprising as one of the Republican Army generals, Augustus Magee, was a former US Army Lieutenant who resigned his commission in order to fight alongside the Tejanos for the independence of Mexico.

The Republican Army changed hands to José Álvarez de Toledo y Dubois after Augustus Magee died, and General Gutierrez gave control of the army to Toledo y Dubois. When word reached the San Antonio where the Republican Army was camped, that the Spanish Royal army would attack soon, they vacated San Antonio fearing a siege would bring death to the Republican Armies families. They marched down to the Medina River and attempted to set an ambush for the larger Spanish Army. Cavalry Scouts from the Spanish Army were attacked by the Republican army and fled back to General Arredondo. Believing they had caught the main Spanish Royal Army, the Republican Army gave chase. Their cannons and wheeled guns were quickly mired in the sand and rendered useless for the battle when they came upon the main forces of the Royal Army who had been waiting for the Republicans to fatigue themselves moving the guns. The last part of the battle was quick and bloody. Of the 1,400 Republicans, less than 100 were left alive as Arredondo ordered the summary execution of the militia members.

General Arredondo only lost 55 men in this battle and afterword the Spanish Royalist Army would attack San Antonio anyway for aiding rebels against the Spanish Government. Though this battle was lost, it would spur the remaining Tejanos into fighting against Spain and Mexico’s independence being recognized eight years later on August 24, 1821. Many of the Americans, Mexicans and Tejanos, would later fight again for the Independence of Texas against Santa Anna who was at this battle serving under General Arredondo.