Located near the city hall and Boston college campus is an area referred to as "Heartbreak Hill". Heartbreak Hill was given its nickname because it is the last of the "hills" in the Boston Marathon and the site of a moment captured between two famous ethnic marathoners in 1936. Johnny Kelley and Ellison “Tarzan” Brown were in a race for the finish line now commemorated by the nickname Heartbreak Hill.

Young at Heart Statue at the base of Heartbreak Hill 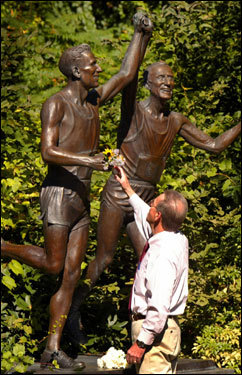 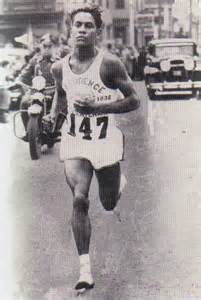 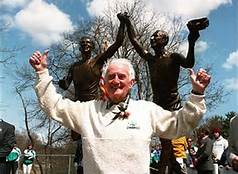 Ellison “Tarzan” Brown was a Narragansett Native American of Rhode Island who was given the nickname Tarzan for his athletic build and love of climbing trees. Famous for being a two time Boston Marathon winner, he also competed in the 1936 Olympics.  His tribal heritage included being an ancestor of royal family of the Narragansett tribe, his tribal name was Deerfoot because of his athletic abilities.

Johnny Kelley was a marathoner who still holds the records for the most Boston Marathon completed at 58. Kelley also competed in the 1936 Olympics on the American team with Tarzan Brown and again at the age of 42 in the 1948 Olympics. Kelley was name the “Runner of the Century” by Runner’s World Magazine in 2000.

At the base of the hill in Newton, is a statue of Johnny Kelley, called the Young at Heart statue.  This is the hill that during the 1936 marathon, Johnny Kelley was behind and had caught up to Tarzan Brown. When he caught Brown he patted him on the back as he passed by. Brown, renewed by the conciliatory gesture, rallied to drive past Kelley. This resulted in “Kelley’s heartbreak” hence the nickname Heartbreak Hill. Kelley had been the winner of the 1935 Boston Marathon only to have the heartbreaking loss to Tarzan Brown in the 1936 race.