E.G Lewis had been trying to get the Southern Pacific Railroad Company to build a passenger/freight depot in Atascadero for years. Lewis had built a small rail depot close to the Curbaril Road rail crossing. This “depot” only had one small building where passengers could wait to remain out of the elements. As Atascadero grew, Lewis knew he needed a larger rail depot. Lewis was trying to get the S.P.R.R to build the depot voluntarily with no luck. In 1921, the Atascadero Chamber of Commerce penned a letter to the railroad commissioner asking that Southern Pacific build and maintain a suitable depot for the community. The Chamber’s argument was that Atascadero had transformed from “one family of six persons to a town of over 400 private homes costing $1.2 million and that the cattle ranch had been converted into a fruit region with 4,000 acres of trees…” In 1921, Southern Pacific granted the community a rail depot. The station was completed in May of 1922 at the cost of $35,000. It was constructed in the Italian renaissance style. Southern Pacific removed the station from Service in the late 1950s and it was torn down in 1964. The station's location was nearly directly under the Highway 41 bridge in Atascadero. 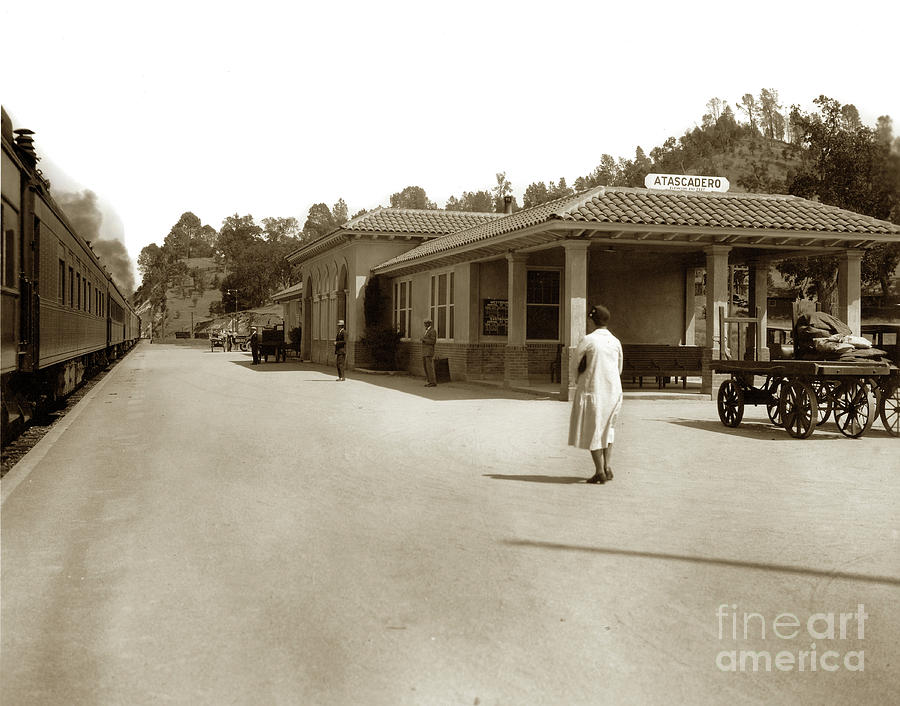 After the depot had been completed, a route from the town needed to be completed so passengers could access the station. A bridge was built across Atascadero creek so the station could be accessed at its location on Capistrano avenue. The bridge was built in 1921 and is still in use today. Unfortunately, Lewis’ idea of having the rail station visible from the civic center did not come to fruition. A writer from the Atascadero News wrote “There is no telling what Atascadero has lost through not having an attractive railroad station within sight of the civic center. Many who had planned to stop here changed their minds seeing no evidence of a town…” Financing of the station was the original reason S.P had not built a station before. Eventually Lewis and S.P reached a financing agreement that suited both parties. S.P had originally promised the depot by Christmas of 1921, but delays in finding a contractor meant that W.D Jones of Berkley was awarded the contract in October. The actual construction of the building began in November 1921 with the grand opening occuring in May of 1922. More than 2,000 people attend the opening ceremony. The station was in use for four decades and was even featured in a Southern Pacific film promoting travel in California. After air travel began to railroads in the late 40s and early 50s, Southern Pacific began using the depot for freight instead of passengers. A number of local citizens wanted to purchase the building but S.P had too much concern for injuries with the building being so close to the mainline of the railroad. In 1964, Albert Mazzei of Garden Farms purchased the building for $75 if he would demolish it and take away the bebris. The station was torn down before almost any citizens realized what was happening.

Edward Gardner Lewis purchased 23,000 acres of rolling hills from J.H. Henry in the Spring of 1913.  The Atascadero Colony was created by Lewis who formed the Colony Holding Corporation to take care of promoting the Atascadero enterprise.  It was referred to as a “dream city”. His motto was, “all the advantages of country life with city conveniences”. The rail depot hoped to put Atascadero on the map but did not bring in the travelers that E.G Lewis had originally hoped for.

Allan, Lon W.. Atascadero: The vision of one -The work of many. Atascadero, CA. Mike Lucas.

The City of Atascadero was founded in 1913 by Edward Gardner Lewis. His plan was to create a model community in his image. Lewis' plan was to create a civic center mall based on that of Capitol Hill in Washington D.C. He wanted the school to sit above the civic center on a hill, now called high school hill, because in Lewis' mind, education should be above all else. During the early years, many "colony houses" were built by newcomers to Atascadero. This tour outlines some historic Civic Center buildings, the old Atascadero Train Depot Location, as well as a few prominent colony houses.