This is a monument built at the northwest corner of N. James St. and W. Liberty St. to house and honor the memory of unknown Revolutionary War soldiers who were found buried near the site of re-constructed Fort Stanwix.

This photo, courtesy of Rome Historical Society, captures the monument's dedication in 1976. 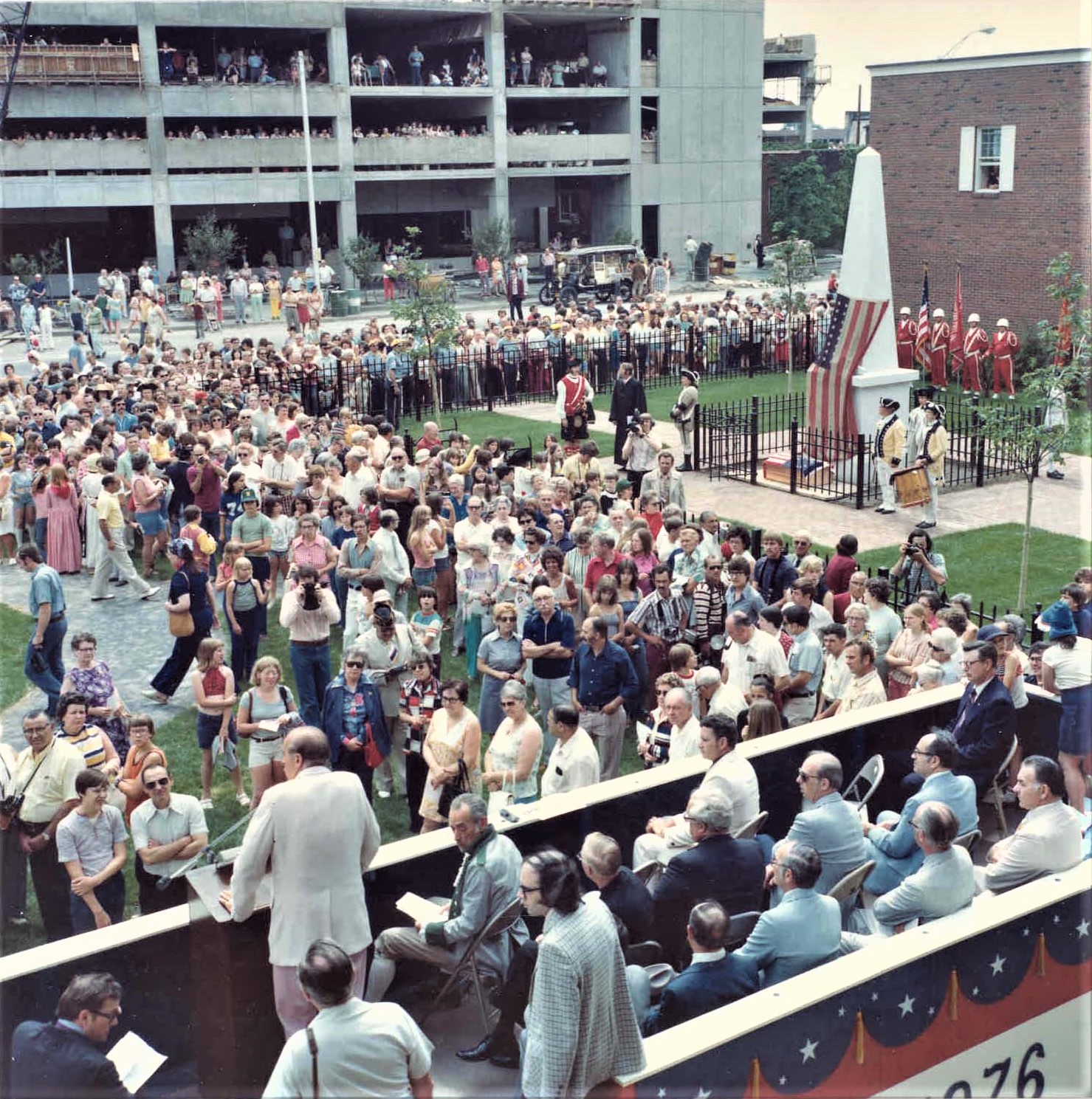 This photo, courtesy of Rome Historical Society, shows a detail of the dedication ceremony. 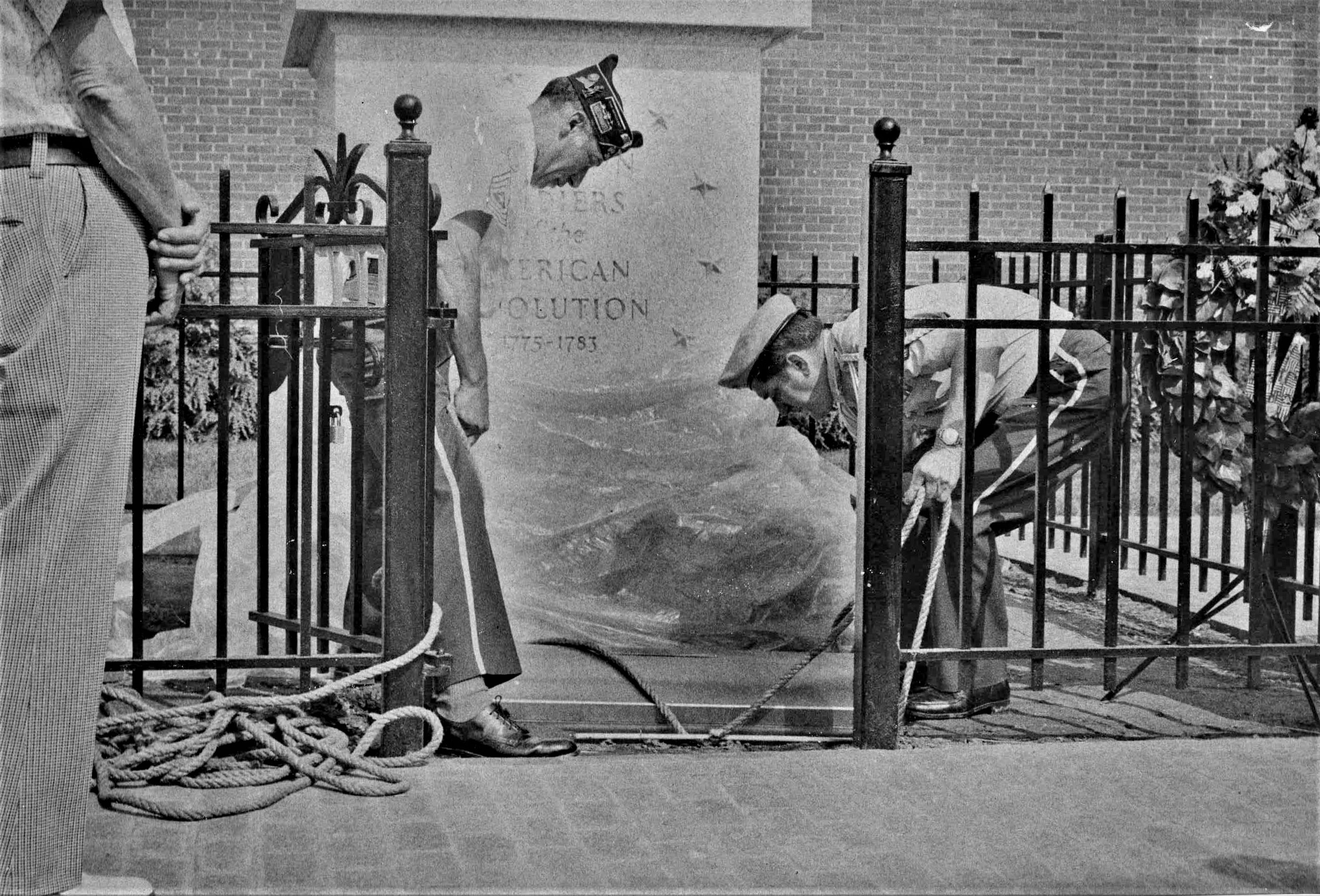 This photo, courtesy of Rome Historical Society, shows the monument as it looks in the summer months. 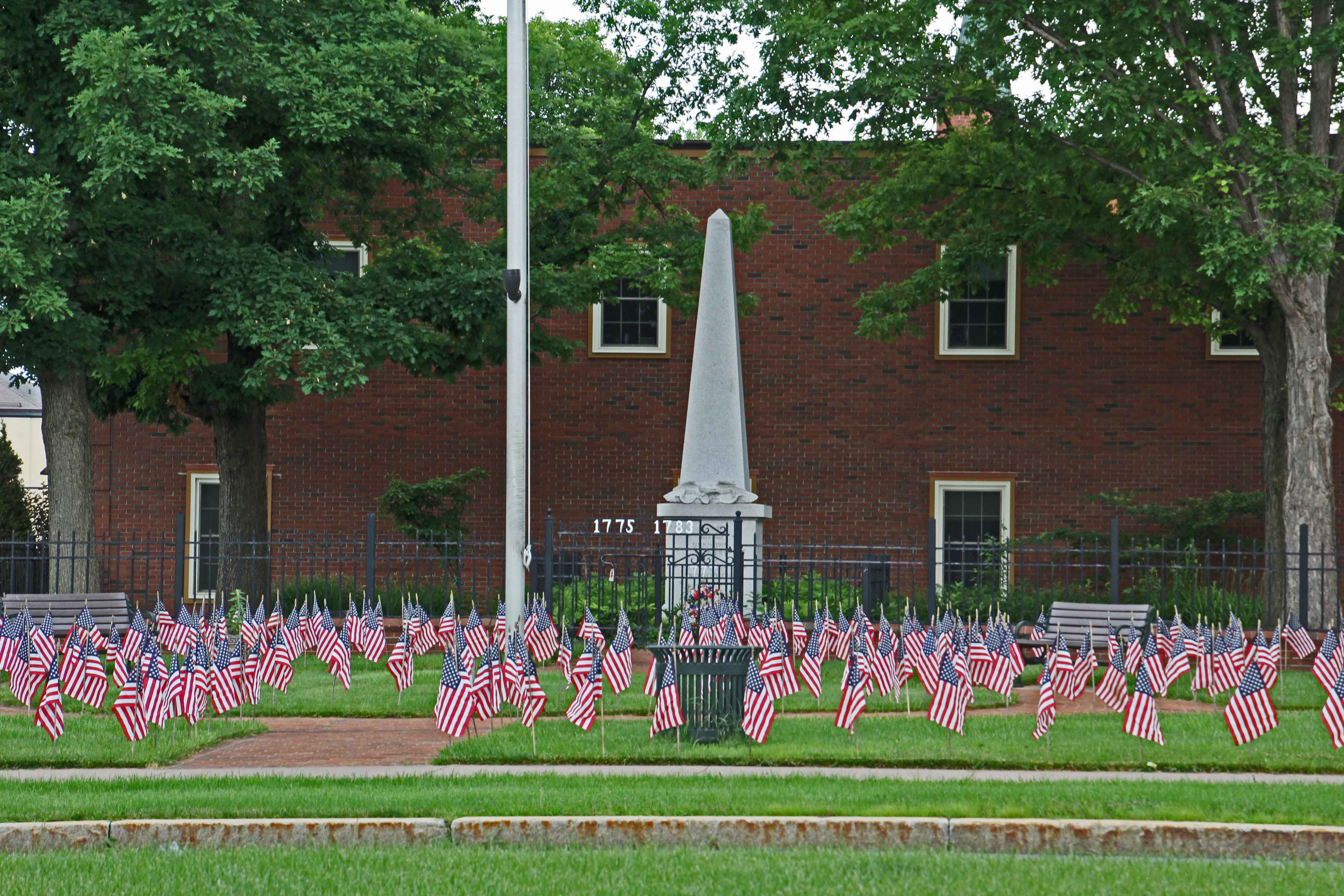 Tomb of the Unknown Soldiers of the American Revolution in Rome, NY

In 1972, along the 100 Block of N. James Street, excavation crews uncovered, and the National Park Service identified, the remains of eight Revolutionary War soldiers.

A year later, the city established the American Revolution Bi-Centennial Committee. One project that the commission undertook was construction of a tomb in which the remains found the previous year would be interred to serve as a memorial to all of those unknown soldiers who lost their lives for the birth of this independent nation.

The remains are sealed in a Revere Copper coffin weighing 100 pounds.

On this Vermont Granite Obelisk, standing 17 feet tall and weighing 22,000 pounds, are inscribed the names of these states, the first thirteen colonies:

It is important to mention that a 14th is also named, as they will forever be recognized as our first allies, The Oneida Nation.

This site, designed by Lorimer Rich of Camden, NY, who is famous for designing the Tomb of the Unknown Soldier in Arlington National Cemetery, was dedicated on July 4th 1976 (200th Birthday) with nearly 2000 in attendance.

On August 9, 1976, the following resolution was passed unanimously by the Rome Historical Society Board of Trustees.

“Whereas, events of transcendent importance in the establishment of American Liberty at the most critical stage of the American Revolution occurred at Fort Stanwix (then called Fort Schuyler) following the first flag resolution by the Second Continental congress on June 14th 1777 and

Be it resolved that the Rome Historical Society following (the) erection of said flagpole by the Bicentennial Commission, WILL regularly fly and maintain an appropriate 13 star American flag in consonance with the first congressional flag resolution of June 14 1777. The Society will do this in reverent memory of our great heritage as long as its possession of this flag site makes it possible to fly the flag of its choice.”1

This tour was created thanks to a collaboration among the Cty of Rome, Jervis Public Library, Rome City School District, and Rome Historical Society. Americana is, for the tour creators, the history of America and a history of things that are quintessentially American. This includes founding a city, westward expansion, and the New Deal as well as gas stations, free public education, and presidential campaigns. Enjoy this 30-minute (give or take) 1.5-mile stroll through the Dominick St. Corridor and its surrounding blocks to explore the history of the United States of America in Rome and the history of Rome itself. After the last stop, return to the starting point and enjoy a picnic on the green. (Go to Jervis Library and show a selfie from the first and last stops to receive a reward. If you do not have a device that lets you take selfies, tell the staff the name of the artist at stop number (3 x 3) to receive the reward. The reward is for children and adults to enjoy together.)