This factory dates back to 1855 and replaces a previous facility Samuel Colt used to manufacture his first firearms. At this location, factory workers manufactured thousands of weapons that changed the course of history. The factory became a city unto itself with housing for skilled immigrant laborers and a central building distinguished by a blue dome similar to what one might find on an Eastern Orthodox church or a mosque. The Colt Armory may be the most important symbol of Hartford’s industrial heritage. And that shiny gold colt that adorns the dome’s golden orb? It might actually be part phoenix, as many times as it’s risen from the ashes – both literal and metaphoric – over the past 150 years.

An 1896 engraving of the Colt Armory. 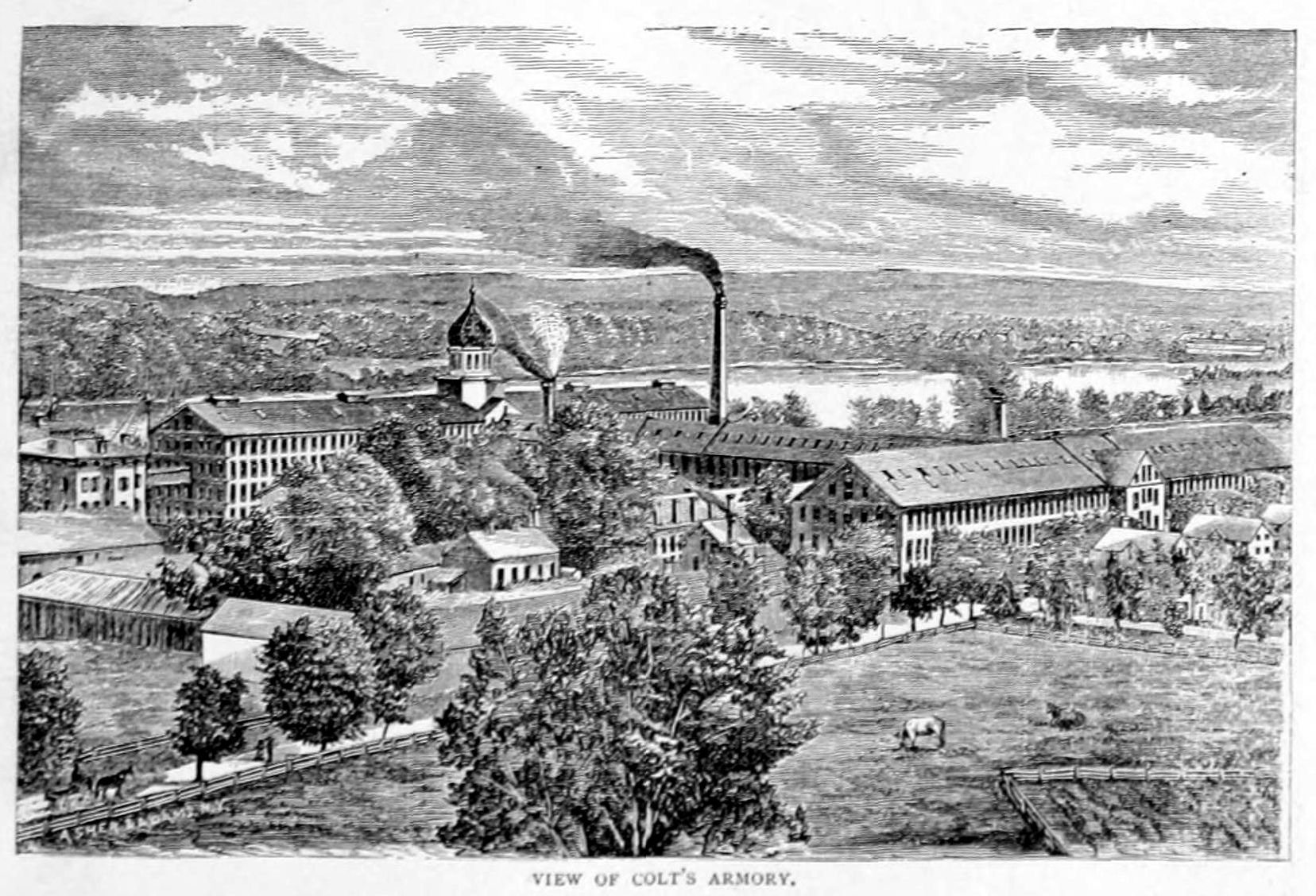 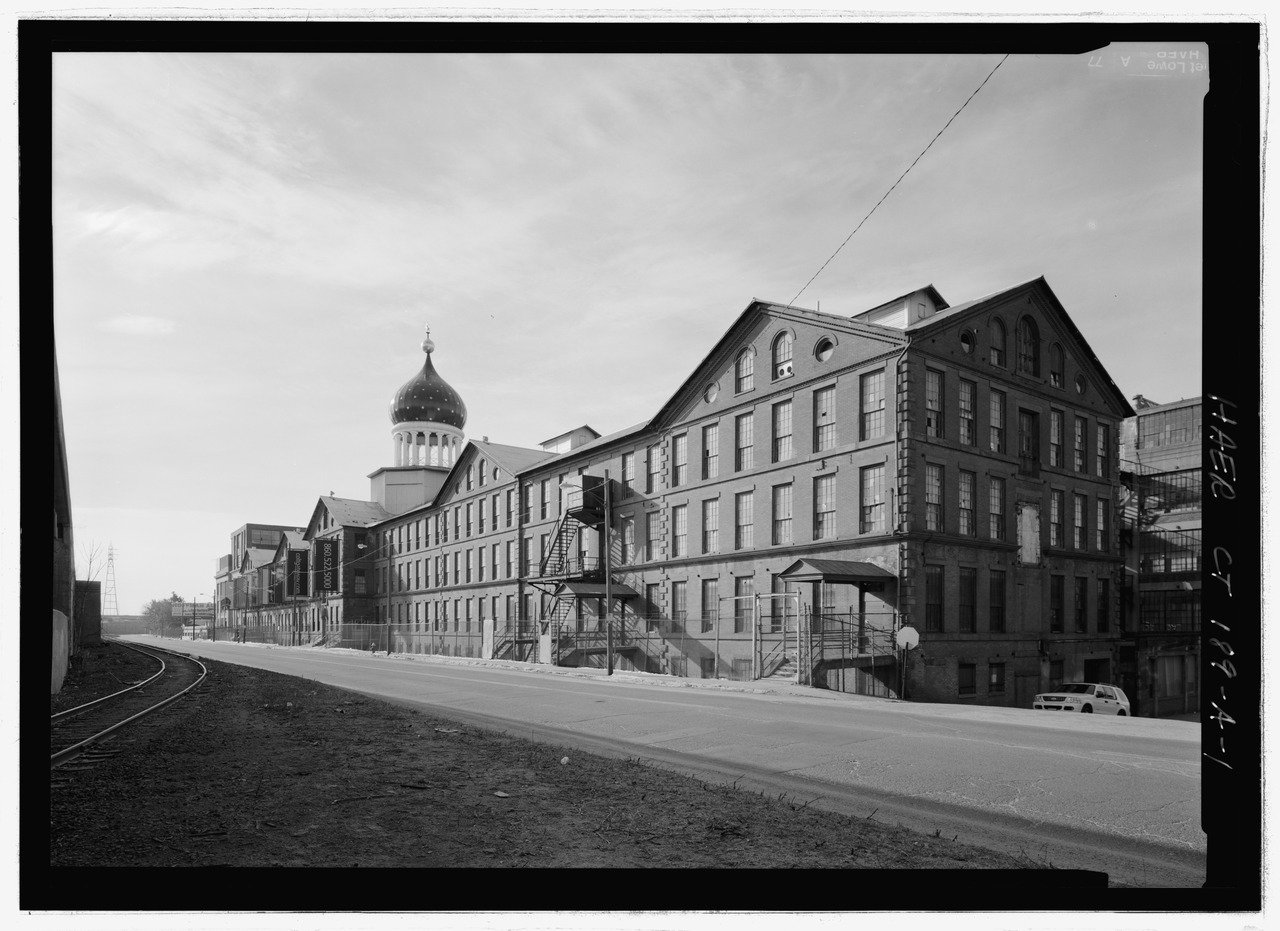 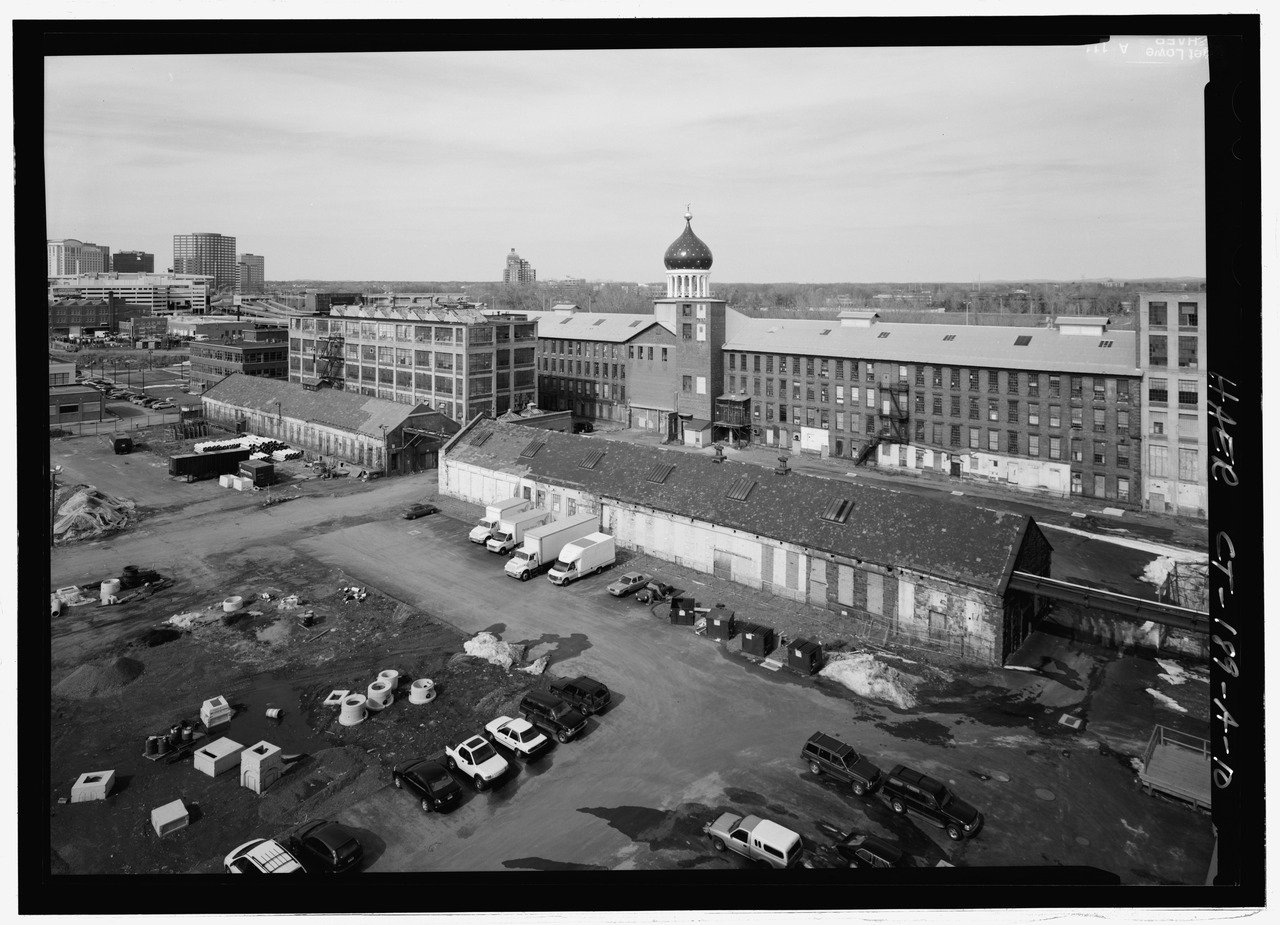 An interior view showing some of the old machinery. 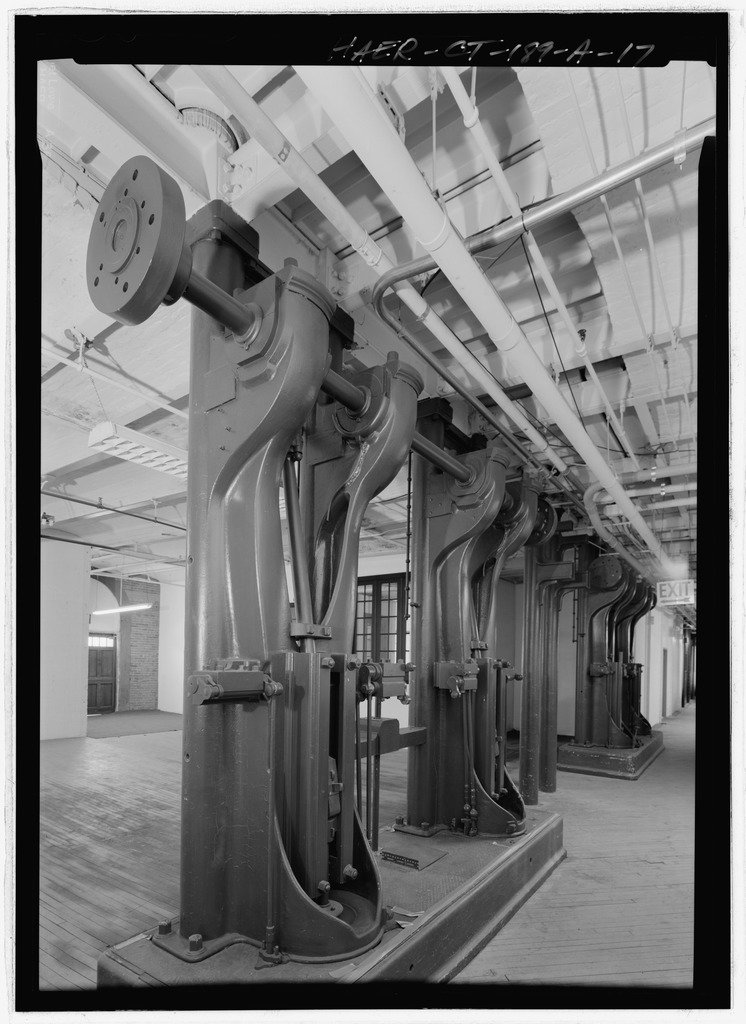 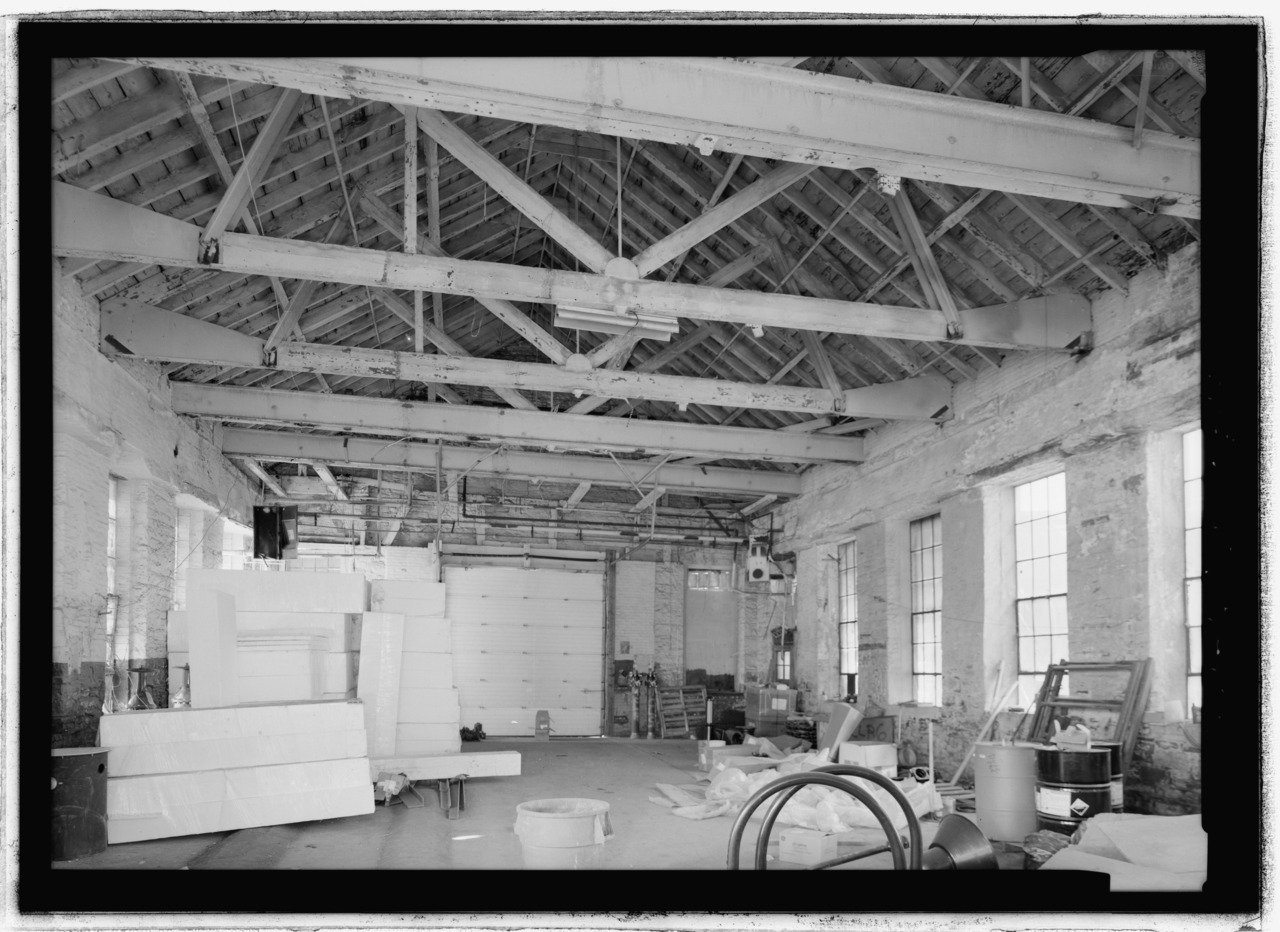 The famous dome circa 2011, complete with replica colt. 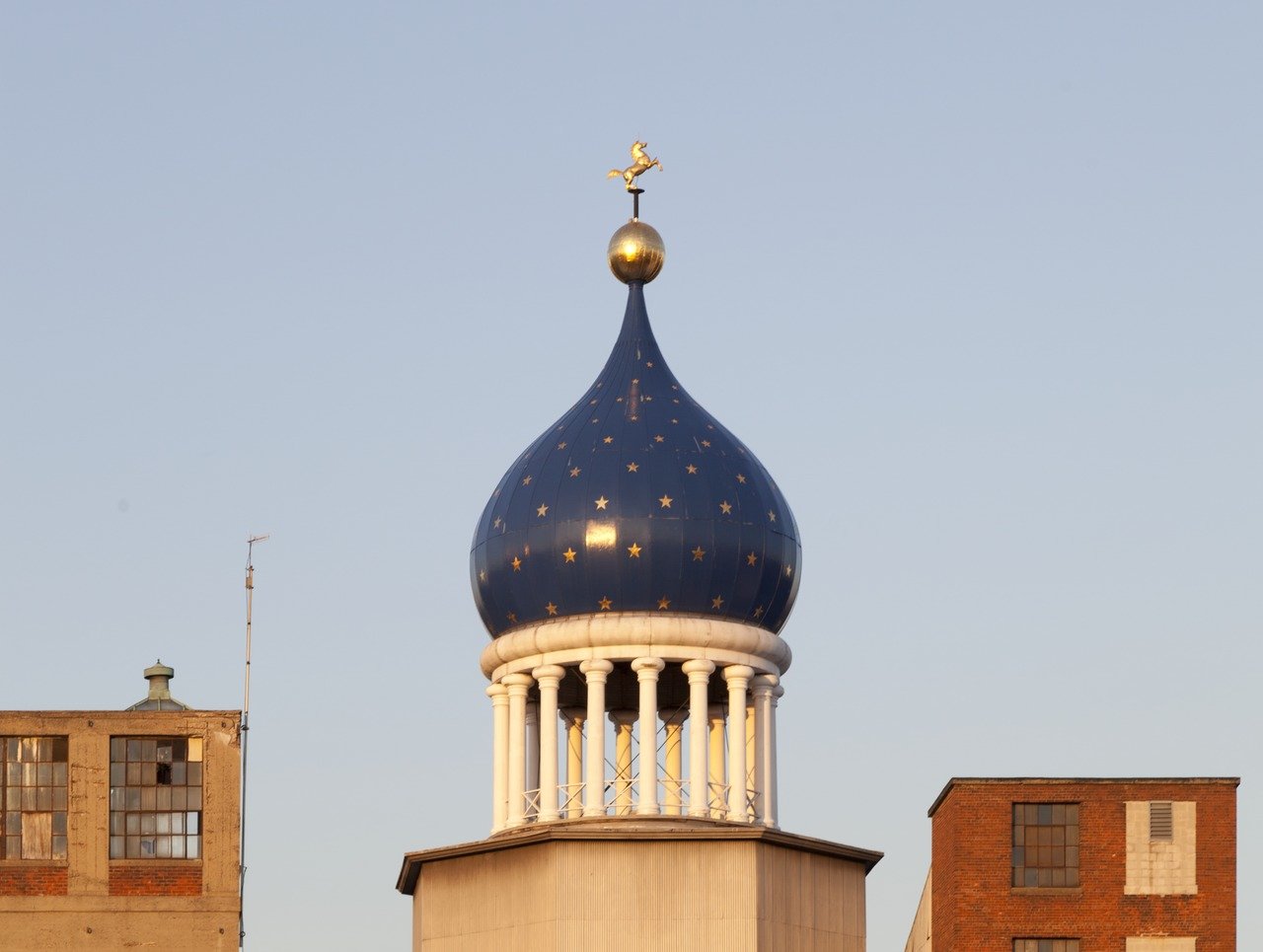 The Gun That Won the West.

The story of the Colt Armory begins with one remarkable man, and continues as the story of his equally remarkable widow. Similar to many other young men on the East Coast, Samuel Colt left his native Hartford at the age of 16 to find work aboard a ship. The young Colt was inspired by the rotation of the ship’s wheel and soon carved out a prototype for a revolving cylinder that would allow a pistol to fire more than one shot before needing to be reloaded.

Colt perfected and then patented this invention in 1836, and although initially unsuccessful, received a large contract from the government to supply weapons for the Mexican War. After this, the orders just kept on coming, and by 1855 Colt was able to open the world’s largest arms manufacturing plant in his home town. By the next year, the armory was rolling out the pistols at an unprecedented rate of 150 per day, using innovative techniques for mass production that were later emulated by industrialists including Henry Ford.

The outbreak of the Civil War in 1861 increased demand for production of Colt’s famous revolver, which was in high demand as a sidearm by troops on both sides of the conflict. While Colt received a lot of bad publicity for the fact that his model 1851 was so popular with the Confederate army, even though most of those pistols had been purchased before the war. Colt supplied numerous weapons to the Union army, and even raised his own Connecticut regiment. He was proud of his rank of colonel, although he never saw service before dying in 1862. At the time of his death, the Colt Armory had already produced some 400,000 weapons, but that was just a beginning for this factory that would have another 80+ years of peak production ahead of it.

Upon his death, Colt left the armory, as well as millions of dollars worth of property and other assets, to his wife, Elizabeth. Elizabeth, a fairly young woman of 35, was ahead of her time in taking an active role in continuing to expand her company, along with plant supervisor-turned-company president Elisha K. Root. Still, Root himself had also passed on by the time the Colt Manufacturing Company produced what came to be seen as its signature piece, and its biggest success, the Colt Single Action Army. This handgun, also known as the Colt .45 or the Peacemaker, was adopted by the US Army as its standard service revolver between 1873 and 1892, and was the weapon carried by Teddy Roosevelt’s Rough Riders as they took San Juan Hill. The “Gun That Won the West” is such a beloved a part of American history that it is still in production today, carrying a price tag of around $1800 as of 2018.

Before the Colt Armory reached new heights under Elizabeth’s leadership, however, there was one pretty significant issue to overcome. Although Colonel Colt’s death had not halted the production lines, everything did come to a grinding, smoking, flaming halt on February 4, 1864 when the entire East Armory – the building under the dome – burned to the ground. In fact, the dome itself crashed right through the building, and from there the fire spread across a covered bridge and destroyed the adjoining office building. The fire, which caused nearly $2 million worth of damage and killed one worker, went down in  the records as “cause unknown”, although there was some speculation that it may have been set by Confederate sympathizers. If the Confederates, business rivals, or anyone else was expecting the factory to close its doors, however, they greatly underestimated the amazing Elizabeth. She refused to accept defeat, and instead ordered that the entire building be reconstructed, dome and all. In 1867 the armory reopened, too late for the Civil War but in plenty of time to help win the West and to supply sidearms to Allied troops in World Wars I and II.

By the 1960s, though, Colt had moved the bulk of their manufacturing to a more modern facility in West Hartford, and in 1994 the Colt Manufacturing Company abandoned the old Armory entirely. Before they left, though, they arranged for a renovation of the East Armory’s dome, which had fallen into considerable disrepair. This restoration was funded in part by the sale of the gilded colt statue. The one that stands, or rather rears, at the tip top of the Armory dome today is a replica cast in resin, but the almost-original 1867 zinc colt can be seen at the Museum of Connecticut History. In 2016 the entire East Armory underwent another renovation, this one costing $20 million. Funding for this recent rehab came not only from state and federal grants, but also from private investors such as the JCJ Architecture firm that leases office space under the dome and the Colt Gateway Management Group that rents out luxury apartments and commercial properties in the armory complex.

Today, the Colt Armory is about to enter an exciting new phase in its existence. The entire Coltsville area, consisting of the armory buildings, former homes of workers, management and the Colt family, and even a church and a park built for those workers, is soon to open as a National Historic Park. This will be only the second national park site in Connecticut, after the Weir Farm National Historic Site in Wilton. The Coltsville visitor’s center will be located in the forge and foundry buildings, which have recently been donated to the NPS by Colt Gateway. Although the offices and apartments of the  East Armory building made it unsuitable to house the visitor’s center, its  dome takes pride of place as the header image on the NPS Coltsville web page. Perhaps the dome may even be depicted on the official passport stamp once Coltsville is operational as an established national park, or perhaps the stamp will picture the Samuel Colt statue located in nearby Colt Park or even a Peacemaker, numerous examples of which are housed in the Colt Collection of the Museum of Connecticut History. No matter which image is chosen, the fact remains that this national park designation will ensure that the Colt Armory retains its place in Hartford’s skyline as well as its history for many years to come.