These historical markers share the story of the Battle of Plattsburgh Bay, a pivotal battle in the final months of the War of 1812. From September 6th to September 11th, 1814, American regulars and local militia defended the port city of Plattsburgh against a larger British force who withdrew and returned to British-controlled Canada. The victory occurred one day prior to the successful American defense of Baltimore which inspired Francis Scott Key to write a poem that later became America's national anthem. As a result of the American victory at Plattsburgh, New York, and the Hudson Valley was safe from the attempted British invasion.

A series of interpretive plaques summarize the battle. 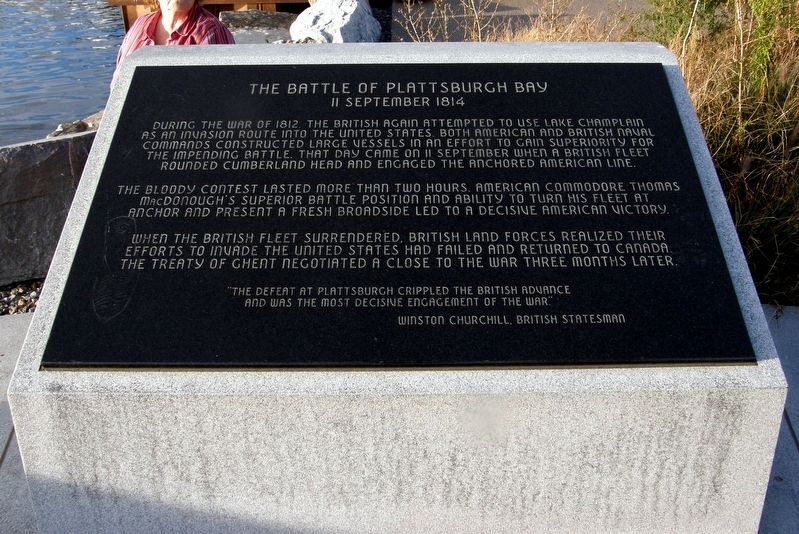 A combined British land and naval force of 14,000 men under George Prevost attacked the American garrison and naval fleet at Plattsburgh on September 6, 1814. American troops at Plattsburgh under General Alexander Macomb combined with sailors commanded by  Commodore Thomas Macdonough halted the British offensive over the next five days.  Macdonough's fleet of fourteen vessels clashed with sixteen British ships on the command of Major General George Prevost. The British objective was to destroy the American fleet and garrison in order to control Lake Champlain and launch an offensive to seize as much American territory as possible. As negotiations were just beginning to end the war, any territory the British conquered would have been a bargaining chip in future negotiations related to the end of the war.

Thomas Macdonough's success was partly the result of occupying a superior defensive position at the narrow part of the bay which forced the British ships into the wind. One of the British ships, Confiance, was too big to move around in the narrow bay. Realizing that their situation was untenable, the British ships and ground troops retreat to Canada. The British losses were heavy with 380 casualties and three hundred captured or deserted compared with 220 American casualties.