Listed on the National Register of Historic Places, the history of this public park dates back to 1666 when the land was set aside as one of three "commons" by the city founders. The triangle-shaped park is bound by Rector Street, Park Place, and Broad Street. For most of its history, the land was used for militia musters and training. The land served as a camp and training ground for troops during the French and Indian War. During the Revolutionary War, officers of the Continental army again used the land as their camp. The U.S. Army recruited troops here during the Civil War, and during WWI, the park once again served as a recruiting station for troops. Today, the park offers visitors a variety of activities, programming, and attractions including sports opportunities, fitness programs, arts and culture, a farmers market, a carousel, and a restaurant called Burg (short for burger).

Aerial photo of Military Park. The "Wars of America" sculpture is in the center of the picture. 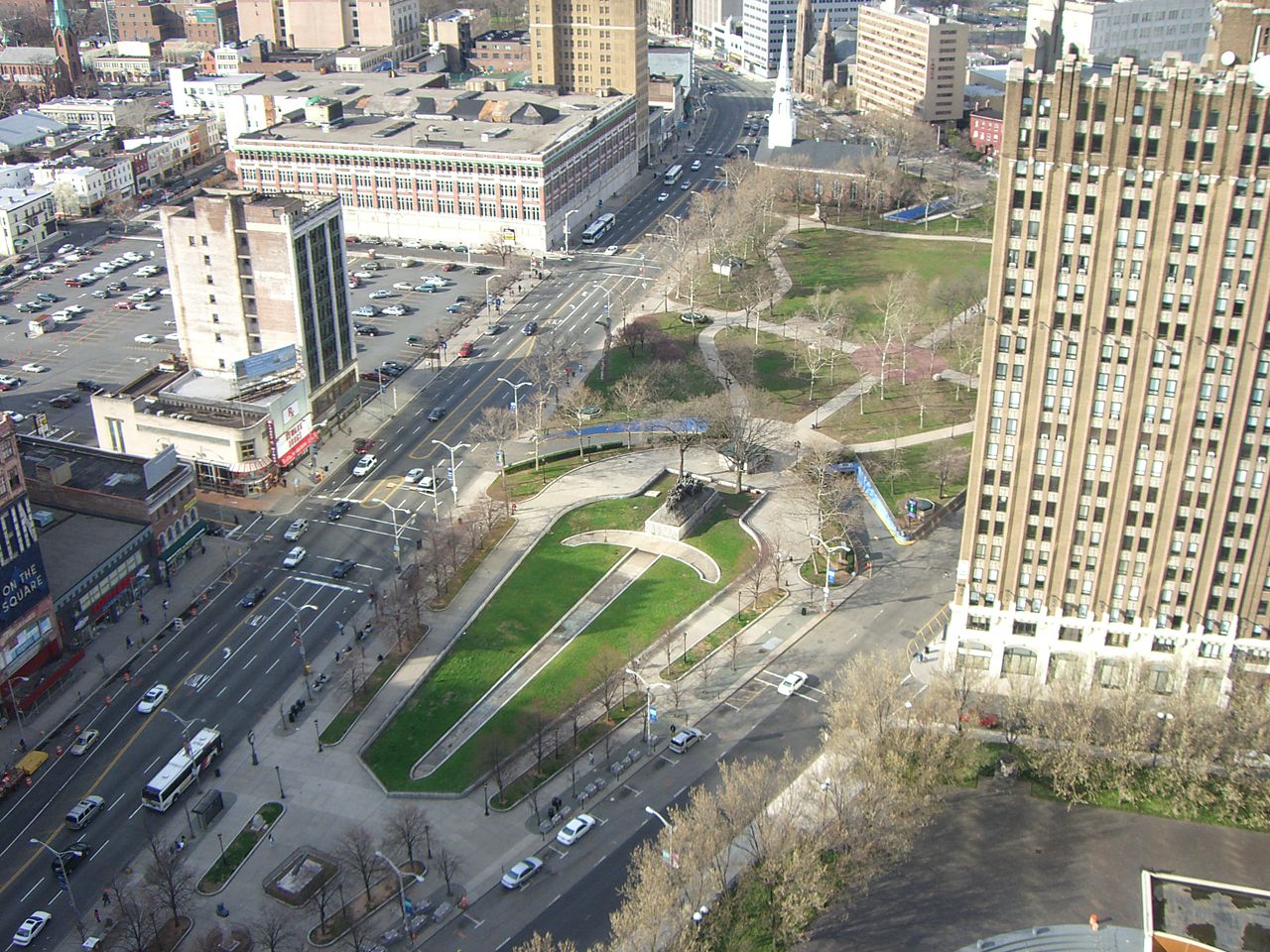 The New Jersey Institute of Social Justice, also known as the (NJISJ, was founded by Alan V. and Amy Lowenstein in 1999. It was created to give people of color a voice they've been longing for generations. The primary purpose of this institute is to identify and address structural racism flaws in the system. That destroys communities of color.

For generations, people of color never got an equal run in this world. They have always been looked down upon as not good enough. Especially in the city of Newark, NJ, with the Newark riot, a cop killed a cab driver. To the racism that's been going on for generations because of your skin color. The New Jersey Institute of Social Justice is here to make a change in the city of Newark. To open the eyes of individual people to the discrimination and racism in Newark, Nj.

Established in 1999 by Alan V. and Amy Lowenstein, the Institute’s cutting-edge racial and social justice advocacy seeks to empower people of color by building reparative systems that create wealth, transform justice and harness democratic power—from the ground up—in New Jersey. Known for our dynamic and independent advocacy aimed at toppling load-bearing walls of structural inequality to create vibrant and healthy communities, we are committed to exposing and repairing the cracks of structural racism in our foundation that erupt into earthquakes in communities of color. The Institute advocates for systemic reform that is at once transformative, achievable in the state and replicable in communities across the nation.

Social justice organizations strive to level the playing field and ensure everyone has equal access to the services and resources they need to thrive. They aim to fight against injustice, support people denied the equal rights they deserve, and improve life outcomes for entire communities. Access. Access to resources is a fundamental principle of social justice. Equity. It's easy to confuse the terms 'equity' and 'equality,' but equitable things are not always equal, Diversity, participation, and Human Rights.

This begins at the Newark Museum and Military Park and makes a loop around downtown Newark to minimize traffic. Highlights include the New Jersey Historical Society as well as many historic buildings, public spaces, monuments, the Krueger Mansion, Grammy Museum, and historic buildings that were home to key civic organizations such as the Newark Female Charitable Society and the Newark Orphan Asylum.