During the late summer of 1862, General Robert E. Lee was working on an offensive plan to cross the Potomac River into Maryland. After his victories at the Battle of Second Bull Run and the Battle of Ox Hill, after which Union forces were forced to retreat to Alexandria and Washington, Lee had the opportunity to begin his Maryland Campaign. Lee’s victory at Ox Hill also resulted in the death of two Union Generals, Isaac Stevens, and Philip Kearny. In addition, the Union's resulting lack of organization and their disorderly retreat gave Lee the opportunity and the confidence to march to Leesburg where his army could cross into Maryland. This spot marks where Lee and the Army of Northern Virginia made their first steps towards Maryland on September 3, 1862. The resulting Union defense of Maryland would send the Confederates back following the Battle of Antietam which was hardly a battlefield victory for either side. Following an unprecedented loss of life in a battle on American soil, Abraham Lincoln decided to issue the preliminary Emancipation Proclamation.

This is the historical marker where Lee began his journey towards Maryland after his victory at Ox Hill. It contains a brief summary of the events surrounding the battle and what followed afterwards. 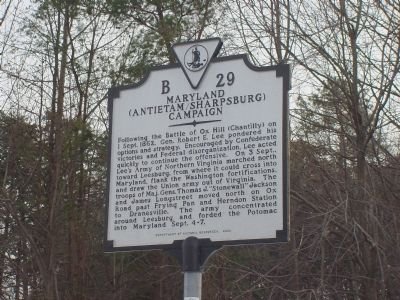 The main sign for the battlefield which contains a lot of markers and information about the battle. The marker for the Maryland Campaign can be found in the battlefield by the North entrance. 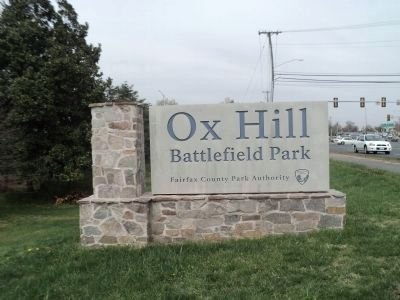 Confederate General Robert E. Lee who lead his Army of Northern Virginia to victory at Manassas and Ox Hill and invaded Maryland. 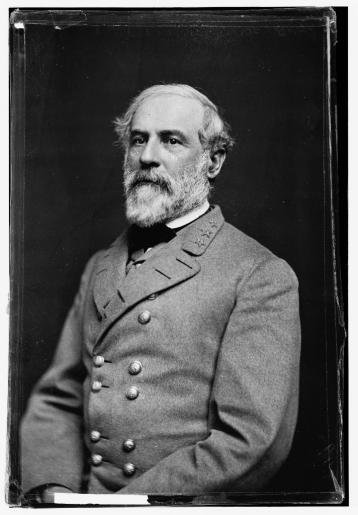 The Confederate victories at both the Second Battle of Manassas and the Battle of Ox Hill provided Lee and his Army of Northern Virginia with the perfect chance to end the war. Lee knew he could secure Southern independence if he was able to convince Northerners that they could not won. He nearly achieved that goal after these battles. Soldiers in the Union Army following those defeats were almost completely demoralized and hardly had any hope for their cause. In order to solidify this state of mind and completely put an end to the war, Lee would need to strike before the Union could reorganize, he had to invade the North.

The day after the Confederate victory at Ox Hill, Lee lead his army North and crossed the Potomac River at Leesburg. Confederate movement forced immediate reaction by the Union, Lincoln was forced to put General George McClellan in charge of the Union Army and to immediately respond to Lee’s movements. The three weeks following Lee’s invasion contained multiple conflicts between Confederate and Union garrisons and what would be known as the bloodiest battle in the Civil War. The fighting at Antietam lasted two days and is known for being the bloodiest and most vicious battle of the war. While there were bright spots and failures on either side, the Maryland Campaign was a failure for Lee and sparked confidence within the Union.

The Maryland Campaign proved to be a turning point in the Civil War. After winning most of the battles in the East during the first half of the war, the Confederacy was repelled. For the Union, they had finally made a strong statement against the Confederacy and by doing so increased the confidence of their people and their soldiers that they could win the war and reunite the Union. After the failure of the Maryland Campaign, Lee and the Army of Northern Virginia would not cross into Northern territory again until his march towards Gettysburg which would also end in a Confederate retreat.