The Kecksburg UFO Incident happened December 9, 1965 when a mysterious glowing ball of fire crash landed in a small Pennsylvanian town. Locals, reporters, and military forces quickly flocked to Kecksburg to determine what did or did not land. Military personal (mainly Air Force) quickly transferred the "supposed" object during the cover of night. Many eye-witness testimony described the object as being metallic and acorn-shaped with odd hieroglyphics written on it. The Kecksburg UFO Incident has never come to a full conclusion because of many different NASA/government cover-ups and conspiracies. Kecksburgh, Pennsylvania is approximately thirty miles southeast of Pittsburgh on the outskirts of Mount Pleasant. Today, the local volunteer fire department hosts an annual summer UFO Festival to raise money for the town of Kecksburg.

Military involvement in the discovery of the metallic acorn-shaped object that crash landed in Kecksburg, Pennsylvania. These trucks secretly carried away the object during the night to avoid attention from the crowds of people and reporters.

This is a Styrofoam replica of the "supposed" metallic acorn-shaped object with hieroglyphics written around the bottom. The replica is located outside the local volunteer fire department in Kecksburg. 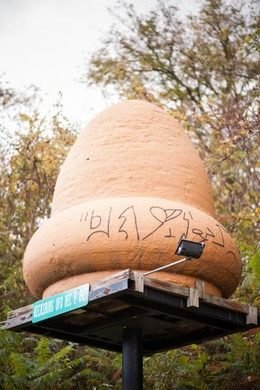 A small town located near Mount Pleasant Township in Pennsylvania experienced an alleged UFO incident on December 9, 1965. The local radio and news stations reported the sighting of a mysterious object in the sky that had crashed landed around the community of Acme. 2 Reports quickly changed as people and reporters found their way to Kecksburg to see the fallen object and determine what had occurred. State police, volunteer firemen, and the military secured the wooded area where the mystery object had fallen before everyone else arrived. Many locals witnessed a flatbed tractor trailer truck carrying a metallic acorn shaped object with odd symbols on it covered by a tarp.1 Military forces had taken the object to Lockbourne Air Force Base during the night then it was transported to the Wright-Patterson Air Force Base headquarters for the Federal Aviation Authority.3 The Kecksburg UFO incident remains a mystery today surrounded by many different conspiracies and government cover-ups.

The first conspiracy compiled by researchers was that pieces of the Russian air-craft, Cosmos 96, landed in Kecksburg. Researchers came to this conclusion because the morning of December 9, 1965 Cosmos 96 had landed in Canada. 2 Cosmos 96 was a classified Soviet Union space probe that had a failed to launch. However, this conspiracy was quickly disputed when Project Bluebook compared the trajectories of both crash sites. The trajectory of the Cosmos 96 landing couldn’t have played any role in the events at Kecksburg. 3 In addition, Leslie Keen concluded in her 2003 investigation that the air-craft was not Cosmos 96 after receiving classified NASA documents on the incident in Kecksburg. 2

"As a result, elements of the Air Force took careful initial steps to try and resolve the mystery, but, publicly at least, could find no evidence whatsoever that either an air-craft or a missile was a definitive culprit." 3

The Bluebook report ended the thought of space debris or an air-craft; however, John Ventre and Owen Eichler created a new theory in 1991 that it was a GE Mark 2 re-entry vehicle. This theory came to light after the government released documents on the American air-craft. Ventre and Eichler discovered four similarities between the Kecksburg UFO and the American air-craft. The first similarity was that the GE had four control jets explaining the controlled, turning descent witnesses had described. In addition, the GE Mark 2 re-entry vehicle was constructed out of copper explaining the green flames witnessed. Next, the photos of the re-entry vehicle showed markings that might have seemed foreign to observers. Finally, the shape of the re-entry vehicle was extremely similar both having an acorn-shaped body. Ventre and Eichler, also, think the extreme military present and quick clean-up was to cover up that the America government was spying on the Soviet Union. 2

Another conspiracy surrounding the Kecksburg UFO incident is that the object that landed was an alien UFO. There are some eye-witness testimony that states some compelling evidence that it was alien activity. One witness told Stan Gordon that they had saw an arm hanging down with three-digits and lizard-like skin. 2 In addition, a man working at Wright-Patterson Air Force Base claimed he saw a body that was four to five feet tall and weighed about eighty pounds lying on a work bench with lizard-like skin. 3 Don Sebastian was in Kecksburg when the object landed and attempted to access the crash site. Mr. Sebastian states that his attempt resulted in him hearing blood-curdling screams causing him to flee the woods.3 In addition, NASA and the Air Forces secretiveness of the events at Kecksburg added to the possibility of a UFO. The military forces, who secured the crash site, were heavily armed according to eye-witness testimony and were quick to resolve the situation. 3 NASA refused to release any documentation of the event until fifty years later. 3 The actions the government and NASA took to cover-up the Kecksburg UFO incident lead people to believe it was aliens.

The multiple conspiracies surrounding the Kecksburg UFO incident are related directly to the government cover up of the event. At the time of the event, the United States Air Force stated that nothing was found at the crash site concluding it was a meteorite. In addition, Project Bluebook claimed that only three people were dispatched by the Air Force from  radar installation near Pittsburg, Pennsylvania. The team's job was to search for evidence of what came down. 3 In recent years, experts and researchers have pressured the government and NASA to release the Kecksburg documents. Leslie Kean in 2003 requested the NASA documents be released for a Sci-Fi Channel’s show aimed to unravel the complexities of the mystery. She received the documents from NASA however could tell there were missing files. The theory was that NASA had gotten rid of certain documents containing information about the incident. Judge Sullivan in 2007 took civil action against NASA to secure public access to all files, records, documents, and memorandum on the Kecksburg crash. The civil action revealed three important truths on NASA reports of the Kecksburg incident. The first was contradictory statements NASA made to its files on the Kecksburg affair. Next, people were concerned that NASA conducted a less than satisfactory search for documentation. Finally, many researchers were suspicious of NASA’s attempt to successfully open up the Kecksburg files. 3 During Bill Clinton's Presidency, John Podesta stated,

This statement shows that the American people are over the lack of corporation from NASA and should release all the files about the Kecksburg mystery. They feel it is time for the Kecksburg UFO incident to come to a conclusion fifty plus years later.

The events that happened at Kecksburg on December 9, 1965 may never come to a conclusion even with all the conspiracies. One thing is for sure that the alleged object was not the Russian space probe, Cosmos 96, due to trajectory. Project Bluebook's report eliminated the conspiracy that space debris or a missile had landed in Kecksburg. However, the release of government documents in 1991 has created the closest conspiracy to date that a GE Mark 2 re-entry vehicle had landed. Finally, many locals and researchers believe it was an Alien UFO that had crashed landed in the small town. The lasting legacy of the Kecksburg UFO incident is a summer festival hosted by the local volunteer fire department. The UFO festival gives witnesses, investigators, and experts the opportunity to share their recollections and theories. Stan Gordon, anomaly researcher, states,

"It's a mystery and after so many years it would be great if we could find that conclusive information about what it was that fell from the sky that night in 1965, but it might be one of those things that we may never have the answer for." 2

In just a few word, Stan Gordon summarizes the legacy of the Kecksburg UFO incident as being a mystery that may never be solved.