This monument was constructed in honor of Scouting's contributions to the United States and all those who helped in developing each scout's character. The memorial was unveiled in Washington, D.C. in 1964 and was later refurbished in 2009. Its construction was approved by Congress in 1959, after its introduction by Senator Lyndon Johnson, with funds raised from scouts and donations from across the country. The memorial consists of three statues, a man, a woman, and a scout, all atop a pedestal which bears an inscription, and a fountain. The National Park Services restored the memorial in 2009 following its decline. Problems with the fountain’s operation, and other issues which arose since its creation. The memorial is located south of the White House in the Ellipse along 15th Street North West.

The Memorial Statues Each statue represents an important aspect in the development of a Scout into an adult. 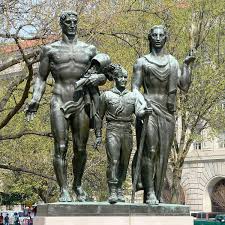 The Memorial's Fountain The fountain was closed for several years because of the damage to its marble, causing the water to leak. 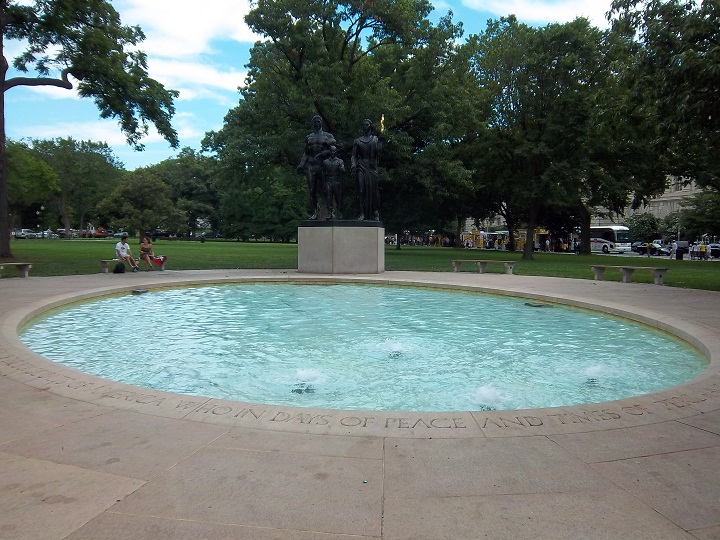 In 1959, during the fiftieth anniversary of scouting, then-Senator and Majority Leader Lyndon Johnson proposed to Congress the construction of a memorial to honor Scouting in America. The government did not pay for the memorial, because funds were raised throughout Scouting and through donations. In 1960, the Golden Jubilee year of Scouting, a fund was created by scouts and their leaders to erect the memorial. With the location of the memorial’s prominent position possible through the authorization of Congress, the Commission of Fine Arts, and the National Capital Planning Commission. During its unveiling on November 7, 1964, Associate Supreme Court Justice Tom Clark, who’s own Eagle Scout fiftieth anniversary was that same day, accepted the memorial on behalf of the nation.

The statues were created by sculptor Donald DeLue out of bronze, and the rest of the memorial was designed by architect William Henry Deacy, both from New York City. A scroll was placed in the pedestal containing the names of all the people and scout units that gave money to construct the memorial. The three statues on the memorial represent a man, a woman, and a boy scout, all atop an inscribed pedestal. The memorial was created in honor of the service of millions of scouts to the nation and the millions of men and women who aided in the development of their character. Each of the memorial's statues has a symbolic purpose with several meanings. Some of these are the male statue’s representation of strength, love of country, and honor, the female statue’s love of god, justice, and freedom, and the scout representing the hopes of the past, present, and future. The pool placed in front of the statues represents the honor of everyone who joined the Boy Scouts, which also bears an inscription around its edge.

The memorial is located south of the White House on the Ellipse along 15th street North West in Washington, D.C. Starting in March 2009 the memorial was refurbished by the National Park Service through funding from Congress and reopened in April 2010. Between the memorial’s unveiling and refurbishment, it had received several minor repairs over the years, but the fountain stopped properly working. Requiring new pumps, pipes, and the pool’s marble replaced, while the statues were refurbished to resemble their original design. Today the memorial is open to the public and continues to be maintained by the National Park Service.