The Independence Boulevard Christian Church is one of the most historic churches in northeast Kansas City. The origins of the IBCC date back to 1886, with the current church building constructed in the early 1900s. The Beaux-Arts style structure was said to inspire the design of other buildings in Kansas City, such as Union Station. The church was built in large part thanks to the financial support of wealthy local businessman Robert Alexander Long, a lumber industry mogul and devoted member of the congregation. Once very popular, church membership reached several thousand at its peak, but today numbers less than one hundred. In recent years the IBCC has attracted attention for its Micah Ministry, a program that provides free meals, clothing, and toiletries to hundreds of people weekly. The church building was added to the National Register of Historic Places in 2015.

The Beaux-Arts style IBCC was constructed in 1904, with later additions in 1909 and 1919. Image obtained from Wikimedia. 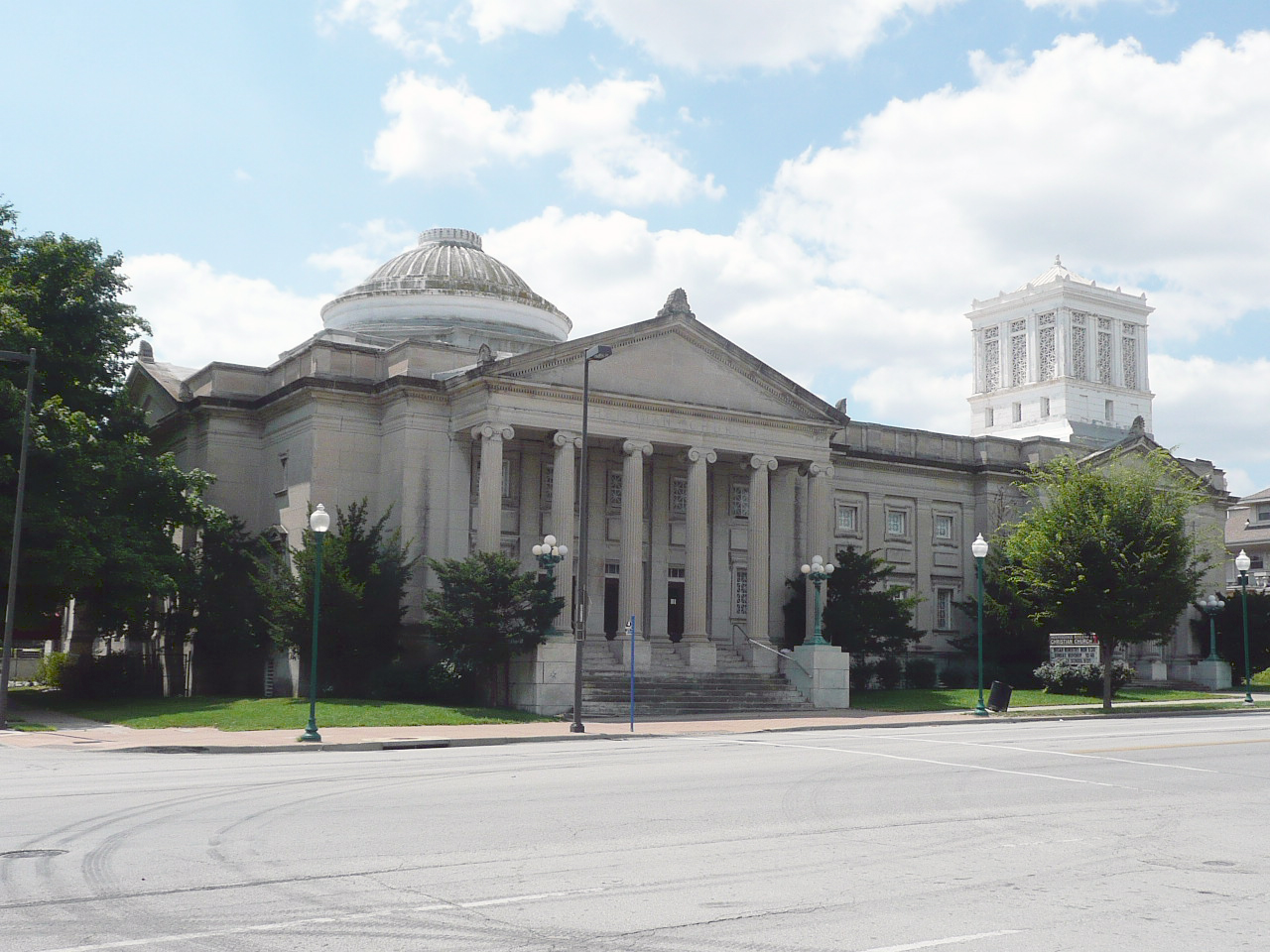 Sanctuary of the church. Image obtained from the Independence Boulevard Christian Church. 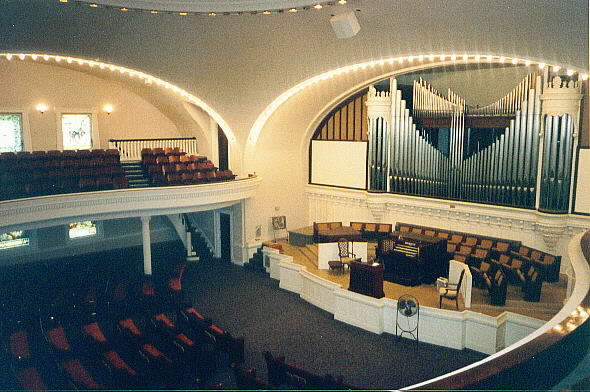 The sanctuary includes this Casavant Pipe Organ. Installed in 1968, it contains 3,366 pipes and took three years to construct. Image obtained from the Independence Boulevard Christian Church. 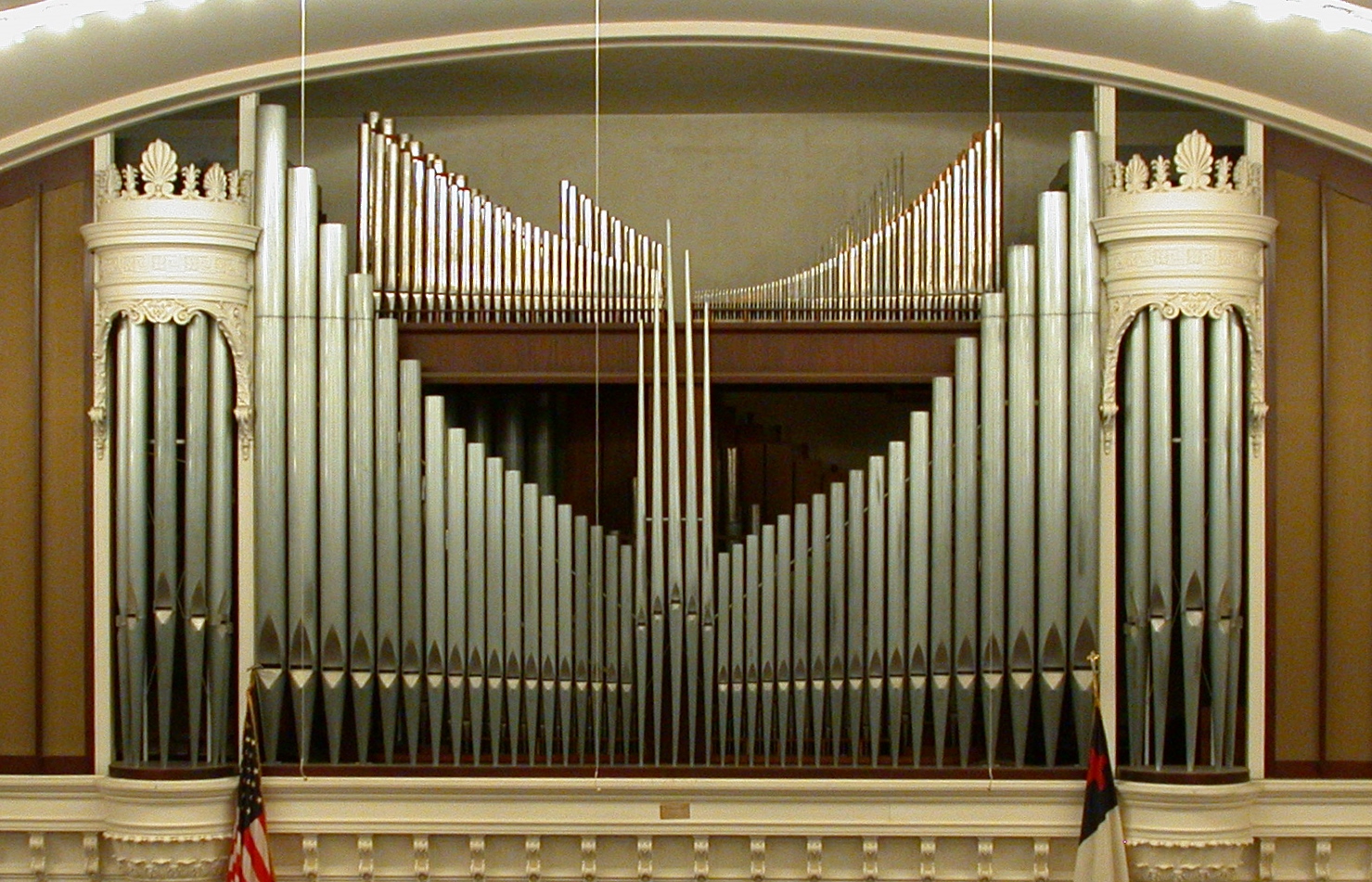 The church contains several original stained glass windows. This one, commissioned by R. A. Long in honor of his parents, was produced by Tiffany Studios in New York City. Imaged obtained from the Independence Boulevard Christian Church. 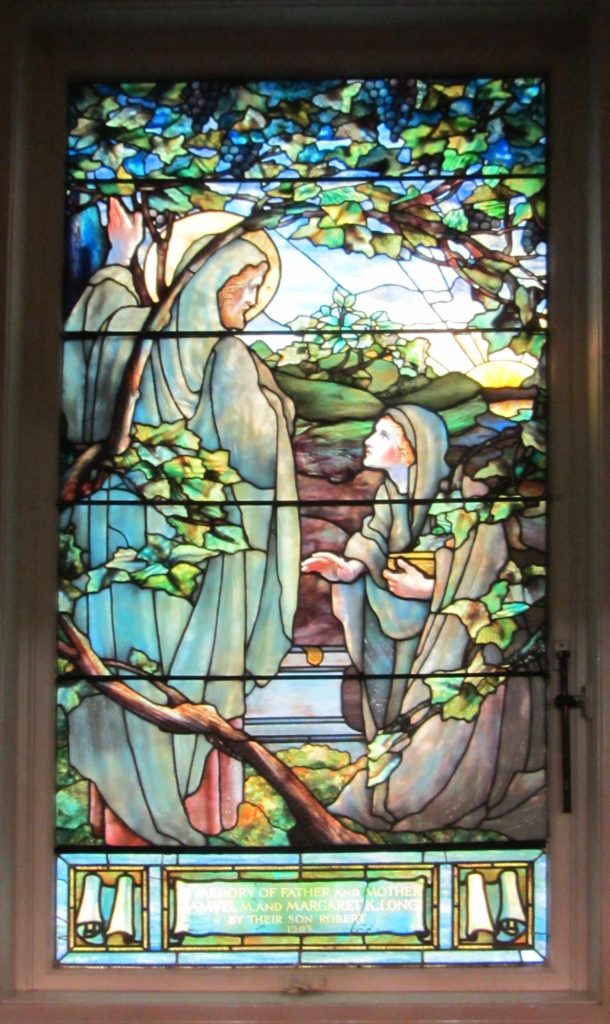 The IBCC began in 1886 when the Young Men’s Society of Senior Endeavor established a Mission Sunday School for local youths in the Independence Avenue area who wanted a place closer to their homes. Originally the group met in a single rented room at the Christian Church in Morley Hall, but membership grew and it soon evolved into a full church. A sanctuary was built for the church at 6th Street and Prospect Avenue in 1890. One early and prominent member of the congregation was businessman Robert Alexander Long. Long founded the Long-Bell Lumber Company in the 1870s and soon amassed a fortune, making Kansas City a leader in the national lumber trade in the process. In the early 1900s Long began engaging in philanthropy, and would contribute money to a number of buildings and projects.

Around 1900 Long purchased a plot of land on the corner of Gladstone and Independence Boulevard and soon approached the church with an offer: He would pay half the cost to construct a new church building, if the church was able to pay the other half. The offer was accepted and construction of the sanctuary began in 1904. Henry F. Hoit and his architectural firm of Howe, Hoit and Cutler were commissioned to design the building. Long had become acquainted with Hoit after he designed the Palace of Varied Industries at the 1904 St. Louis World’s Fair. After the church, Long would hire Hoit to create multiple other structures, including the R. A. Long Building and Corinthian Hall. Hoit designed the church in the Beaux-Arts style and included Ionic columnns, mosaic floors, stained-glass windows, a dome, and much ornamentation. The building, now christened the Independence Boulevard Christian Church, was completed in 1905 at a cost of $125,000, of which $70,000 was paid for by Long. It was one of the most expensive churches ever built in Kansas City.

Membership at the IBCC exploded following the opening of the new sanctuary, tripling from 952 in 1904 to nearly 3,000 in 1912. The rising popularity of evangelism, massive theatrical revivals, and the personal influence of Long were factors that attracted more congregants at the time. In 1909 Long paid for the construction of a three-story educational annex and gymnasium south and west of the sanctuary. The new buildings contained facilities such as meeting rooms, classrooms, a chapel, library, soup kitchen, swimming pool, and space for programs such as a Boy Scout troop. In 1919 Long paid for the installation of a bell tower in honor of his friends Mr. and Mrs. D. O. Smart. It contained eleven bells weighing a total of 13,000 pounds. Since the final addition in 1919, the church building has remained largely unaltered.

After hovering around 3,000 up into the 1920s, church membership at IBCC steadily declined, and today numbers less than 100. Financial gifts and endowments have allowed for continued maintenance and preservation of the building. In 2001 the Micah Ministry was established as part of an effort to revitalize the church and connect with the local neighborhood. A 501 © 3 non-profit, the Micah Ministry serves hot meals for impoverished locals every Monday, and also offers free clothing, toiletries, counseling, and legal advice. Hundreds of people are served each week, and the program has attracted some media attention. In 2015 the IBCC was added to both the National Register of Historic Places and the Kansas City Register of Historic Places.