The Durst-Taylor Historic House was built in 1835 and is the second-oldest building in the city. It is a rare surviving example of from that period and is somewhat unique in that was built out of wood rather than the more common adobe construction. It was home to many early civic leaders such as Thomas Rusk. Today, it is a house museum and includes a chicken coop, heirloom gardens, smokehouse, Blacksmith shop, and a sugarcane mill.

The Durst-Taylor House was built in 1835 and is the second oldest in the city. The land on which it stands dates back to ca. 1779 when Spaniard Andres de Acosta owned the property. 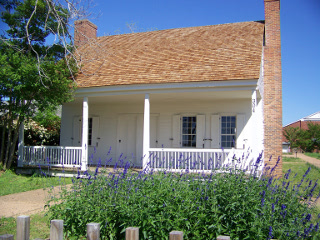 The house is also unique in that it stands on its original site. The property was once a large tract of land, first owned by Andres de Acosta beginning, it is believed, sometime around 1779. A dozen owners have lived here and the house was named after two of them: Lawrence S. Taylor and Joseph Durst. Taylor's descendants owned the house until the late 1980s, when an organization called the Mckinney Foundation bought and restored it, and then deeded it to the city in late 1990s.