The Old City Hand Dug Well in the Seneca City Park is the last visible sign of Seneca, Kansas's original water system, installed in 1895. The 65 foot deep by 34 feet wide, rock/brick-lined well may be the widest and second largest hand-dug well in Kansas. Water depth is approximately 15 feet. A domed house with shingled roof covers the well and is topped by a cupola. It was encircled by a six foot chain link fence about 1975 as a safety measure. Children used to scramble up the shingle roof and then slide back down. 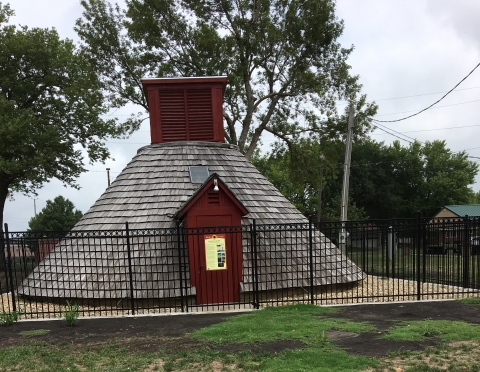 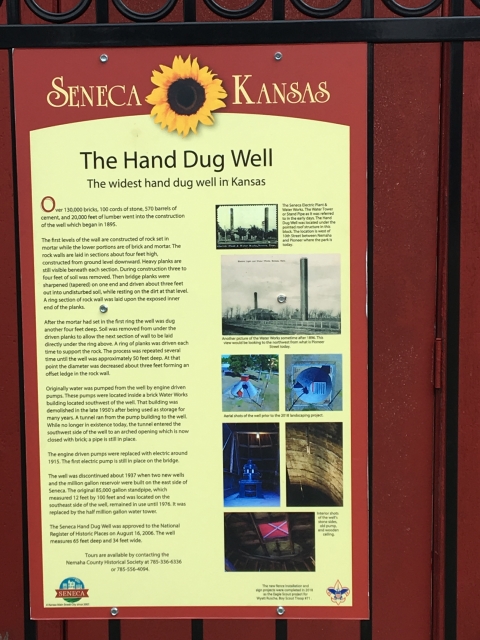 The first levels of the wall are constructed of rock set in mortar while the lower portions are of brick and mortar. The rock walls are laid in sections about four feet high, constructed from ground level downward. Heavy planks are still visible beneath each section. During construction, 3 to 4 feet of soil was removed. Then bridge planks were sharpened (tapered) on one end and driven about 3 feet out into undisturbed soil, while resting on the dirt at that level. A ring section of rock wall was laid upon the exposed inner ends of the planks. After the mortar had set in the first ring, the well was dug another four feet deep. Soil was removed from under the driven planks, to allow the next section of wall to be laid directly under the ring above. A ring of planks was driven each time to support the rock. The process was repeated several times until the well was approximately 50 feet deep. At that point the diameter was decreased about three feet forming an offset ledge in the rock wall. Digging probably became more difficult once the water table was reached. Water had to be pumped out to allow for continued digging and wall construction. Soil instability, within water bearing strata, may have been the reason well diameter was decreased. If the soil was too unstable, driven planks could not have supported a wall section while the succeeding ring was dug out and laid.
The walls required upwards of 130,000 bricks, 100 cords of stone, 570 barrels of cement and over 20,000 feet of lumber.
Originally water was pumped from the well by engine driven pumps. These pumps were located inside a brick Water Works building located southwest of the well. That building was razed in the late 1950s after being used many years for storage. A tunnel ran from the pump building to the well. The tunnel does not exist today, but entered the southwest side of the well where the arched opening is closed with brick; a pipe is still in place.
The engine driven pumps were replaced with electric, probably about 1915. The first electric pump is still in place on the bridge.
The old well was discontinued about 1937 when well #1 and well #2 and the million gallon reservoir were built, all on the east side of Seneca. The original 85,000 gallon standpipe was located southeast of the Old Well, continued in use until replaced in 1976 by the one-half million gallon water tower. The Stand Pipe was 12 feet by 100 feet.