The Gamma Phi Beta Sorority House on the campus of the University at Urbana-Champaign is a historic chapter house. It was constructed in 1918 as the residence of the Omicron chapter of the Gamma Phi Beta sorority and was subsequently remodeled in 1927 in the Georgian Revival style by the Peoria architectural firm of Hewitt, Emerson and Gregg. The house represents the flourishing of the Greek Letter Society movement at the Urbana-Champaign campus of the University of Illinois in the first decades of the twentieth century. 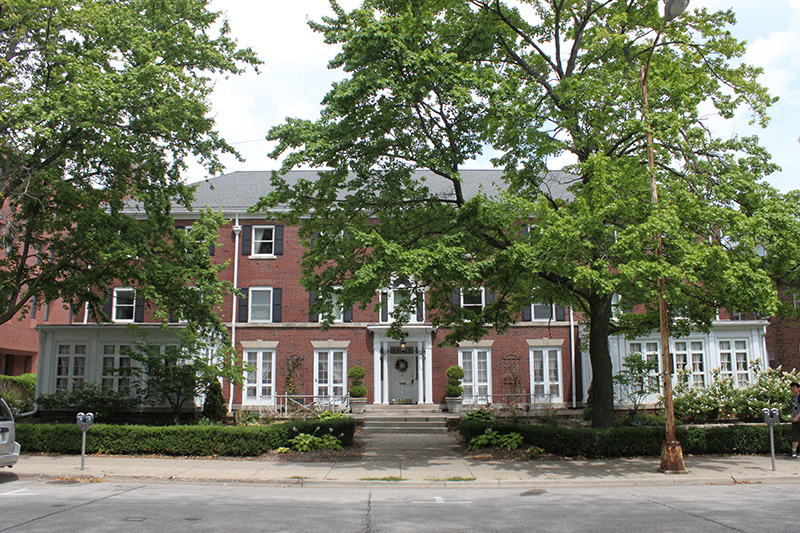 The Gamma Phi Beta Sorority at Urbana-Champaign:
Gamma Phi Beta was founded at Syracuse University on November 11, 1874. The Omicron chapter in Urbana, founded on May 24, 1913, was the fifteenth national chapter. It emerged out of the Phi Beta club, an organization sponsored by Professor and Mrs. C.M. Moss and Mrs. E.C. Schmidt, a former Dean of Women at the University of Illinois.

The Chapter House:
The Gamma Phi Beta house was originally constructed in 1918 at a time when there was a shortage of housing for women at the University of Illinois.  Busey Hall, the first female dormitory, was constructed in 1917, but could house only 104 women out of 1160 female students.

Decades later, during a boom in the construction of chapter houses at Urbana-Champaign in the 1920s, the Omicron chapter raised money for a remodel of the house by the Peoria architectural firm Hewitt, Emerson & Gregg in the Georgian Revival style. Notable features include the two boxed-in porches and the recessed entryway flanked by columns.