Camp Algona POW Museum was created in 2004 to preserve the history of the Prisoner of War camp that existed in Algona from 1943 to the end of World War II. The museum has a number of permanent exhibits in addition to other areas that host special displays and educational programs. Camp Algona held a total of ten thousand German prisoners from April 1944 to February 1946. The museum preserves and shares the history of the camp as well as the soldiers and prisoners. While the museum is relatively small, it is a popular tourist destination and serves local schools and community groups. In addition to regular hours, the museum also offers tours by appointment.

Front view of the museum entrance. 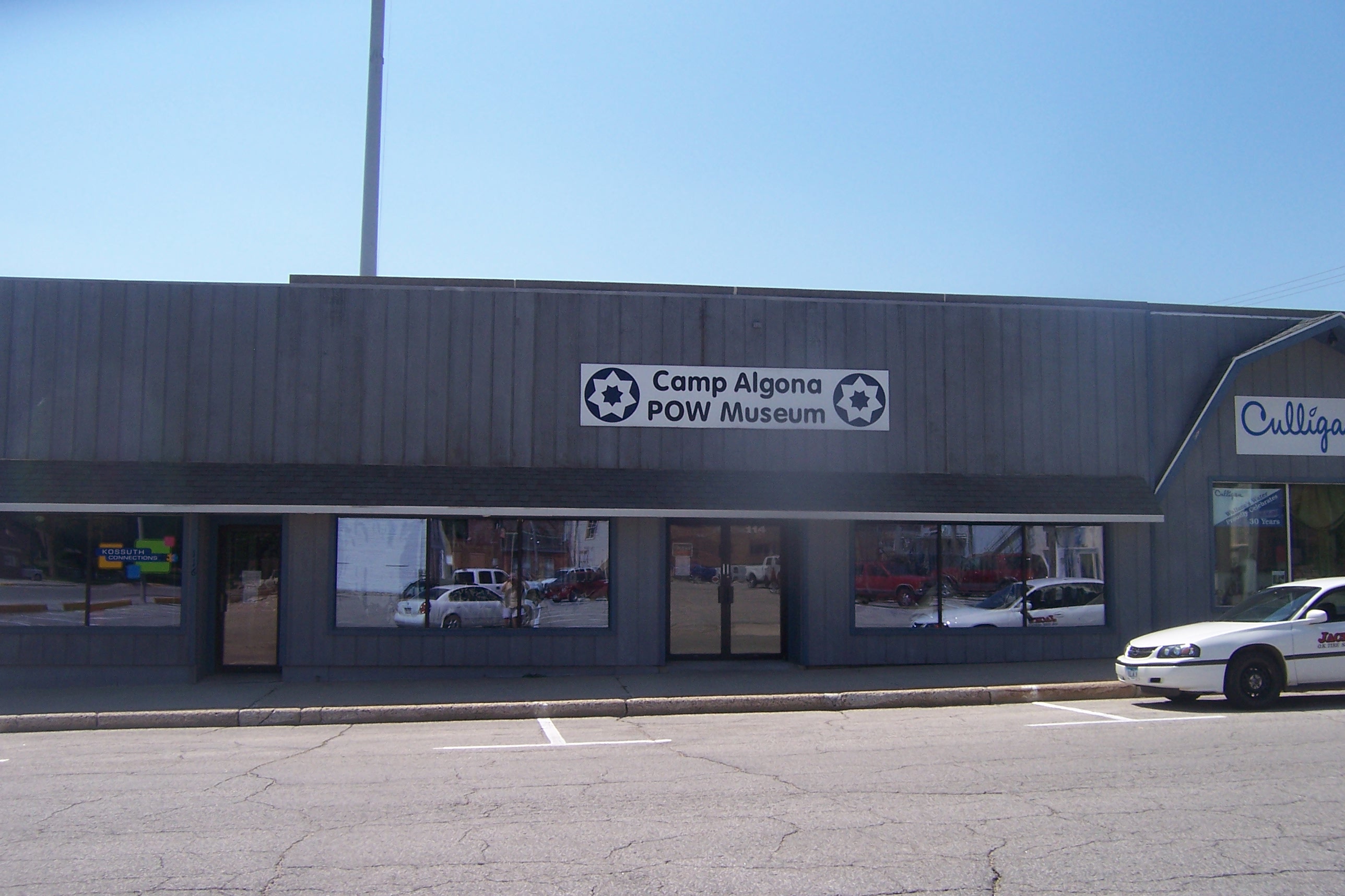 The opening exhibit of the museum. 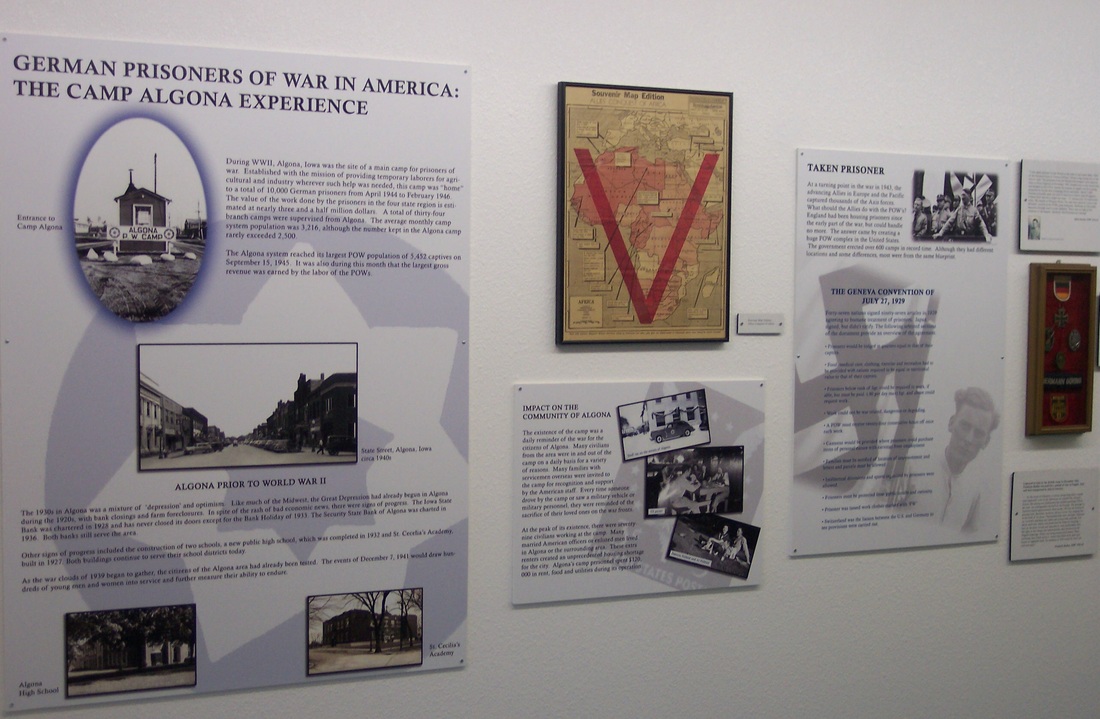 Sketch journal of a German POW. 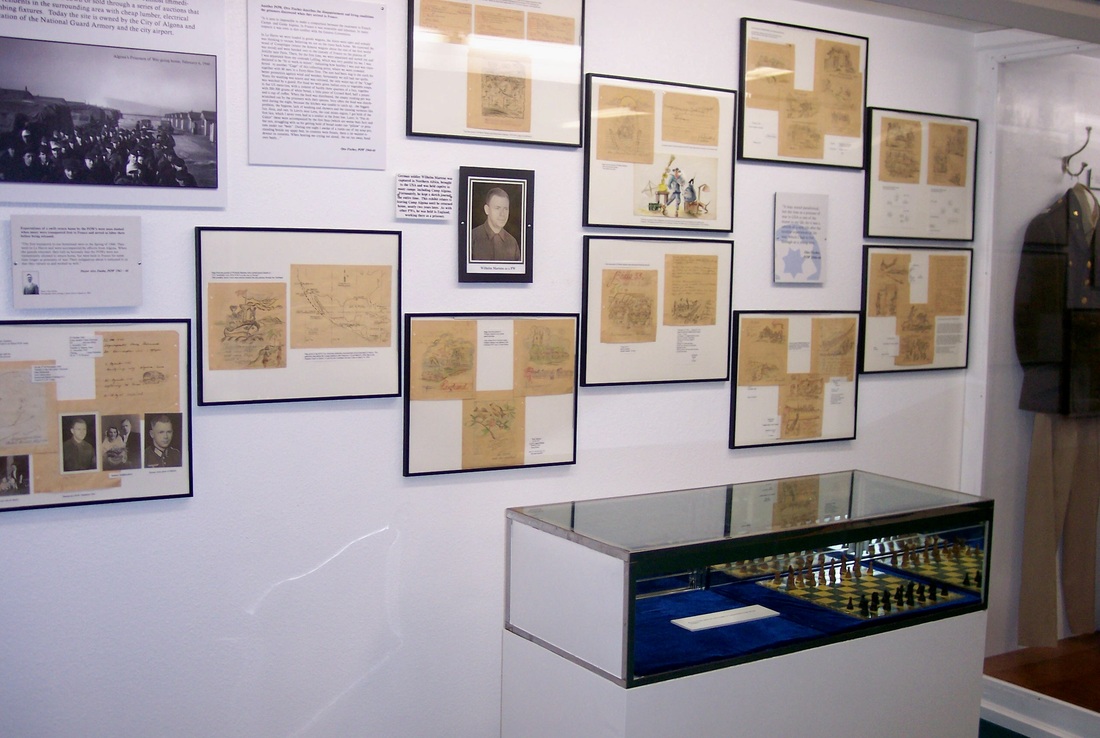 Sketch journal of a German POW.

Exhibits cover topics ranging from the origins and military history of World War II to the operation of Camp Algona and other POW camps. The museums include artifacts from local men and women who served at Camp Algona

The museum is divided into six main exhibits. The first exhibit explores German POWs in Camp Algona, the exhibit explains that the average monthly population of POWs was around 3,216. The exhibit also explains that the camp had a huge impact on the community of Algona economically. The second exhibit explores the culture of the POW camp behind the barbed wire. For example, German POWs were given writing materials, art supplies, woodworking utensils, and musical instruments to prevent boredom. Many pieces of art are still displayed in the exhibit.

The third display showcases the jobs that women took over during the war while the men were overseas. The fourth display explores the military presence in Algona at this time, and what the local town soldiers did on a daily basis. The fifth display builds more from the fourth, as it showcases the lives of the local soldiers, and seeks to recognize, as well as thank, the local soldiers for their service. The final display seeks to compare what the American soldiers faced in POW war camps in Germany and Japan to what soldiers faced in POW camps in the United States.

Along with the six regular displays, there is a seasonal nativity scene that was constructed by four POWs in the camp, which the camp donated to the First United Methodist Church of Algona, and is displayed at the Kossuth County Fairgrounds.