Employees of Premier Pocahontas Coal Company dedicated this monument to the twenty-one men who lost their lives in a World War II plane crash. The plane crashed near this location on July 2, 1942. The aircraft was a former commercial airliner that was being used to transport soldiers and operated by the United States Army Air Corps. 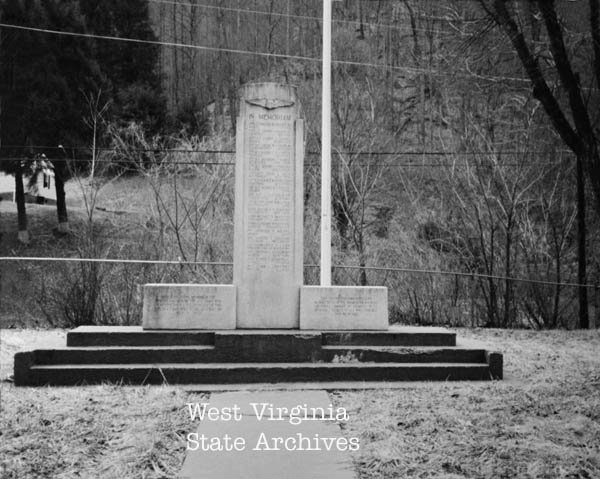 Near this location in 1942, a United States Army Air Corps plane crashed. 17 of the 21 men who were killed were identified after their plane crashed and burned on a mountainside in Premier, West Virginia. Victims were sent to the local funeral home around Premier and most of the victims could only be identified by their identification tags. There were three different investigations to determine the cause of the crash, which happened during a heavy rainstorm with thick fog. The crash was determined a mechanical malfunction. Flying at an altitude of 500 feet, the plane lost a wing and plummeted into a community garden and ended up in a ravine. Debris was scattered on the mountainside for 200 yards.

The victims were from all over the country and the event was a tragic reminder of the realities of World War II for area residents as most families in McDowell County had friends and loved ones serving overseas. Hundreds of people turned out for a memorial service in Welch and wept tears of sorrow for the dead soldiers, even though none of the airmen were from the local area or even the state of West Virginia. This monument was erected near the site of the crash to honor the victims following the rediscovery of these tragic events.