Among the creation of prisons nationally, Jeffersonville opened the first state prison in 1821 at the corner of Ohio Avenue and Market Street. In 1847, the prison moved to this location in Clarksville, IN. Originally housing both men and woman, the prison became a reformatory for men only in 1873. After a fire in 1921, the building as sold to Colgate-Palmolive in 1921. The official state prison is now housed in Michigan City, IN. (See below for details). Digital Photo Book: https://archive.org/details/SouvenirIndianaStatePrisonSouth Preserving the Indiana Penitentiary (South) https://www.indystar.com/story/news/2013/08/25/indianas-first-state-prison-uncovered/2697209/ 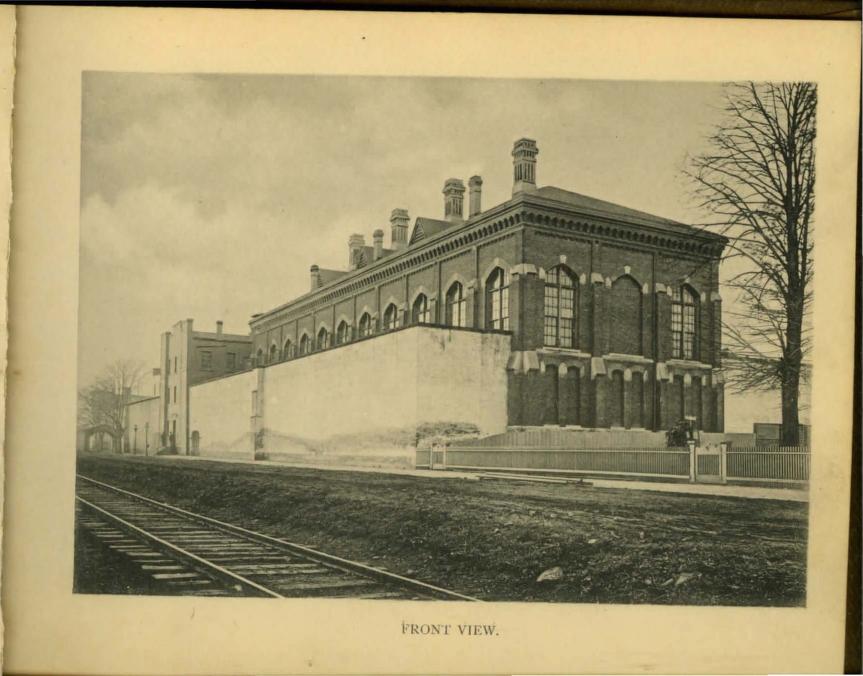 State officials considered Jeffersonville an important economic and social hub in the early 1800s. At the corner of Ohio Avenue and Market Street, the first prison was built in 1821 because it was "regarded at that time as the best market for the product of convict labor". Prisoners were "leased" to private individuals for their labor. Due to the "deplorable conditions" and turnover of superintendents, the official state prison, Indiana State Prison South, was moved to Clarksville, IN (this current spot) in 1847. Men and women were housed in this prison until 1873 when women and girls were transferred to Indianapolis.
Nationally, states opened prisons around the 1820s--the Jacksonian period of US history--and Jeffersonville was no exception to this trend. Scholars suggest a variety of reasons why prisons became tools to reform criminal behavior at this time (vs. punishments of whipping or banishment). Importantly, American politicians and policy makers wished to see their new American society as different from the monarchical British, and therefore they nearly abolished the death penalty except for serious crimes, such as murder. The also hoped to insure punishment (as Colonial punishment was somewhat disorganized). Finally, in a period of an open democratic society, many feared social demoralization and deviance. Prisons could insure punishment without using the death penalty. Prisons also became a space to try to control behavior considered "criminal and deviant" in a society that lived with a "subjective vision of disorder.". While formed ostensibly to remove and rehabilitate deviance in society, prisons routinely showed deplorable conditions and harsh disciplinary punishment to prisoners. Many prisoners were isolated regularly, leased out to local business people for labor, and brutally suffered physical consequences due to disobedience.
Following a wave of rehabilitation in the penal system (partially due to over-crowding and disorderly prisons), the Indiana Reformatory began in 1897 housing only men from ages 16 to 30. Properly fed three meals a day, men also learned trades and the "three R's" and "moral and spiritual betterment.". Unfortunately, the prison system during this reformatory period nationally was used to punish foreign-born and first-generation immigrants to the US--suggesting lack of citizenship itself was (unfairly) punishable by incarceration. Also, southern prisons predominately held African American men--laboring akin to slavery on southern plantations. While benevolent in the hopes of reform, Rotman notes that not much changed from the harshness of pre-reform era prisons to the late 1800s and early 1900s.
In 1918, a fire destroyed some of the buildings on this current Clarksville site. The state then sold the buildings and site to Colgate-Palmolive in 1921 for $351, 101.01. In 1923, some inmates were still housed at the site in Clarksville while construction crews built the Colgate Plant.

Rothman, D.J. (1995). Perfecting the prison: United States, 1789-1865. In The Oxford history of the prison: The Practice of punishment in Western society, Oxford University Press: Oxford.

Rothman, E. (1995). The Failure of reform: United States: 1865-1965. In The Oxford history of the prison: The Practice of punishment in Western society, Oxford University Press: Oxford.

Tumulty, C. J. (1931). The History of the Indiana State Prison - Old Prison South and the Indiana Reformatory at Jeffersonville. The Pulse, Vol III, March 1931). (Tumulty acted as the Assistant Superintendent of the Plant).

5.The law establishing the new prison specified that it was to be outside the town limits of Jeffersonville. Laws of Indiana, 1845-1846, p. 36. A 1781 act of the Virginia General Assembly provided a 150, 000 acre land grant to Colonel George Rogers Clark and his men on the northwest side of the Ohio River. A 1783 act established the process for locating and surveying that land "after laying out one thousand acres at the most convenient place therein for a town." William Henry English, Conquest of the Country Northwest of the River Ohio, 1778-1783 and Life of Gen. George Rogers Clark (Indianapolis and Kansas, 1896), 826-27. The town was platted in 1784 at the southwest corner of the 1, 000-acre grant and named Clarksville. The Indiana State Archives has the minute book of the Board of Trustees of the Town of Clarksville, in which is included the 1784 plan of the town. That plan is included on the Indiana Historical Bureau Web site as part of the George Rogers Clark Exhibit. See also, John D. Barnhart and Dorothy L. Riker, Indiana to 1816: The Colonial Period(Indianapolis, 1971), 254.