The gravesite of Nancy Ward is located off of Old Highway 411 in Benton, Tennessee. This historical gravesite was erected in 1822, when Nancy Ward passed away, but didn't receive historical recognition until half a decade later in 1923 .The gravesite holds flowers and gifts and contains a monument of stones as her headstone. Ward was well-respected for being a peacekeeper between the Cherokee people and the white settlers who were trying to take their land. The sight is accessible to the public and is located in the Nancy Ward Gravesite National Park just south of Benton, Tennessee.

This image is located on a plaque that stands near the walkway that leads you to Nancy Wards Gravesite. This is the image used to remember Nancy Ward. 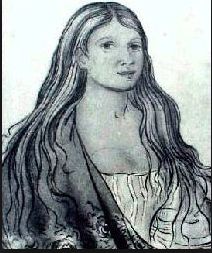 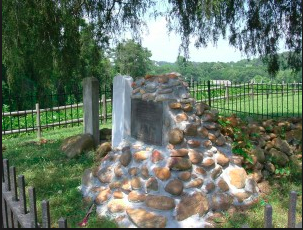 Nancy Ward, also known as the Beloved Woman of the Cherokee, War Woman, and Nanye'hi, is known for her contributions in preserving peace among the Cherokee and white settlers. She was born in the Cherokee capital, Chota, Tennessee in 1738. In 1755, at the age of 17, Nancy was married to her husband KingFisher and had two children, Fivekiller and Catharine. In the same year, her husband was killed in the Battle of Taliwa where she fought beside him with the Cherokee tribe. During the battle, after her husband’s death, she rose up and took control of the Cherokee, leading them to victory in the Battle of Taliwa. Her accomplishment in leading the men and women of the Cherokee to victory is one of the many ways Nancy Ward became “The Pocahontas of the Cherokee”.
Although there were strong tensions among Native Americans and the British Settlers, Nancy Ward worked with the American militia to prevent any of her people being killed. In 1776, Ward warned John Sevier, an American soldier, politician, and one of Tennessee’s founding fathers, of a possible attack by the Cherokee. She wanted to prevent gun violence and the killing of any Cherokee or American settlers. In 1780, she proceeded to warn the Americans again about a possible Cherokee uprising. These warnings were a general warning for both militias to prevent bled shed as well as to lead to negotiations among the Cherokee and settlers. Five years later, in 1785, Ward negotiated friendship with American politicians, soldiers, and citizens to form the Treaty of Hopewell. Although she didn’t sign the Treaty, her brother Longfellow did.  Nancy Ward is also credited with introducing cattle into the Cherokee economy. Because of changes in land, environment, and politics, the Cherokee were forced to learn American homemaking skills due to the lack of food they were receiving from hunting. She knew dairy cattle would provide milk, cheese, and butter while other cattle could be killed for meat. The introduction of cattle to the Cherokee helped the tribe maintain themselves during this turbulent period.
Nancy Ward is a prominent female figure in both Cherokee and American history. After being forced to move in 1819 to a different city in Tennessee, she opened an Inn where she later passed away. She is buried just south of Benton, Tennessee on a hill beside her brother and son. Her great-grandson remembered her burial ceremony, which was a custom in the Cherokee traditions. Her efforts to negotiate peace, fight off American settlers, and produce a strong Cherokee economy in times of trial are recognized as her contribution in becoming one of America's historically influential female figures. Her gravesite became historically significant in 1923 when a monument was placed there by the Chattanooga Chapter of the Daughter of the American Revolution. Her gravesite is located within the Nancy Ward Gravesite State Park. Known as an ally and friend to the American settlers and a beloved, respected war woman of the Cherokee, Nancy Ward Gravesite is historically significant in woman’s rights and history.