The Biscayne House of Refuge was a safe haven for shipwrecked crews and castaways lost at sea. The once-nice refuge house, built along with four others, all identical, was becoming rundown, until Captain William Fulford took over and changed the outlook of the refuge. Fulford wrote simply this in his log book, when he first visited the refuge house,"Jan. 28,1883. Is the house in good repair? No. Is the house clean? No. Contractor repairing house." This shows how Fulword looked down on the home and and the owners. Progressive for his time, Fulford made the refuge livable again and upgraded the home. Now that the house is gone, Brown's Hotel sits closest to where they can assume the refuge was built. 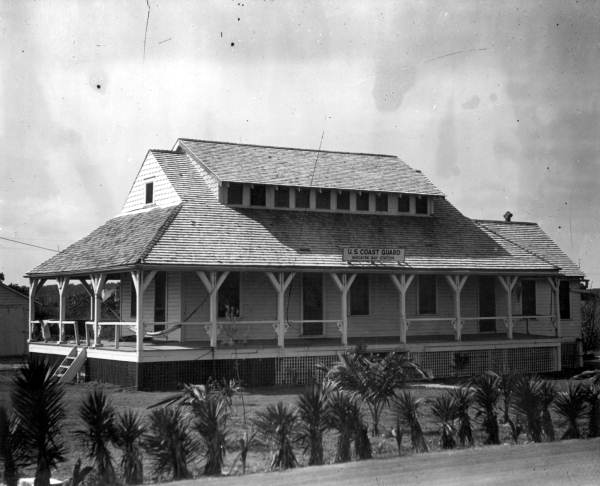 March 1954, the plaque being honored the day it was put up. 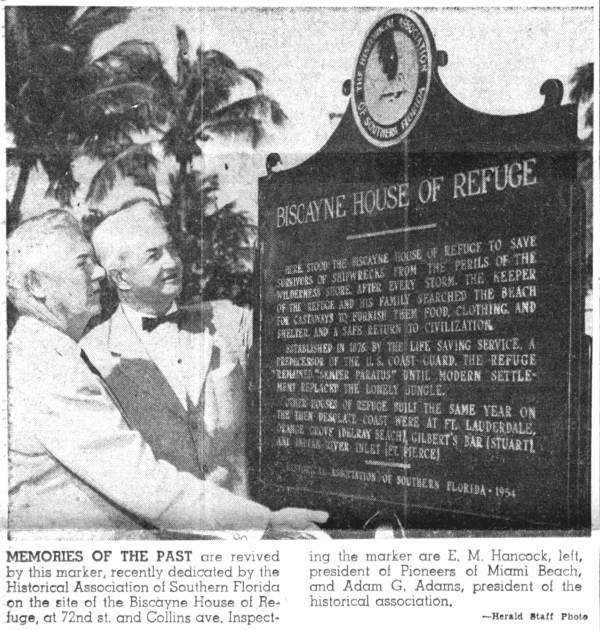 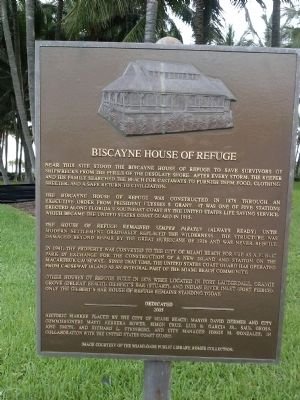 The Biscayne House of Refuge was built in 1876 by the United States Life-Saving Service, to help shipwrecked sailors. This was a project that cost Florida over $15,000 after building four more identical houses along the coastline. The project was intended to help sailors and their crew get back to their families after disasters at sea. The houses would offer food and shelter, and help the sailors and castaways get back on their feet. Each house was identical, but the keeper of the house made each different, for better or worse. A bronze memorial plaque now sits in place of the original Biscayne house.

Each house was built identical to each other and cost around $3,000 a piece to construct.  Each house had one story including a loft.  There were three main rooms downstairs, one being the kitchen.  The kitchen was narrow and had a brick chimney.  All the windows had screens and shutters, but none had glass installed.  This was because strong storms hitting the glass would shatter it.  Along the outside of the house was an eight-foot-wide veranda that covered three sides of the house.  The Biscayne site also had a boat house and a large wooden tank.  This wooden tank would collect rain water for the house to use, so they had to be careful at times not to use too much water.  Also, the back yard was jungle-like, but able to be farmed, because they had fresh fruits and vegetables to feed their guests.

The people at the Biscayne house were the only people in Miami at the time.  The original keeper of the refuge in 1883 was Hannibel Pierce, along with help from his son Charles.  These two were in charge of hospitality.  This site was also home to a coconut plantation, that was overseen by Henry Lum.  The coconut plantation was unsuccessful in providing profit for the island; instead, Lum ended up feeding the rabbit population with coconut seeds.  Pierce was the keeper of the house until 1891 when Captain William Fulford was appointed the new keeper.  The refuge had become rundown because Pierce wasn’t keeping the house maintained and it was falling apart.  Once Captain William Fulford took over, the refuge slowly started to become new again.

Captain William Fulford and his wife took care of the house and the people inside the house.  Before becoming the keeper, Fulford stayed at the refuge and kept detailed logs of the house.  His first log talks about how awful the house was and how it should change.  Fulford continued his logs after he became the keeper, and kept details of his improvements and daily activities.  Fulford was very progressive for his time because he would allow people to buy rooms when there were no sailors in them (sailors would stay for free).  He turned the refuge into a part-time hostel when not booked up already.  Fulford was able to do this because he had such a high-quality reputation for the house that tourists wanted to stay at such a clean, reputable place.  They would feed guests fresh food from the gardens and farms around the island, which only added to the appeal.