This historical marker commemorating Leonard Grimes, an African American business owner who helped numerous people escape bondage via the Underground Railroad, was dedicated in 2007 by students at George Washington University with the support of the DC Humanities Council. Leonard A. Grimes was born free in 1815 in Leesburg, Virginia and moved to Washington D.C. He created a business transporting passengers throughout the city and risked his livelihood and life by helping slaves escape in his stagecoaches. He tacitly used his stagecoach to aid enslaved persons until he was caught and arrested in 1840. After he was released, Grimes moved to Boston where he became a minister. Grimes was a leading member of Boston's Black community and helped secure the freedom of fugitive slave Anthony Burns in a highly publicized case where the people of Boston resisted slave catchers and defied the Fugitive Slave Law. While in Boston, he worked to support efforts to escape other slaves and also helped promote Black military service on behalf of the Union in the Civil War.

Marker at the location of the home Leonard A. Grimes shared with his wife and children. 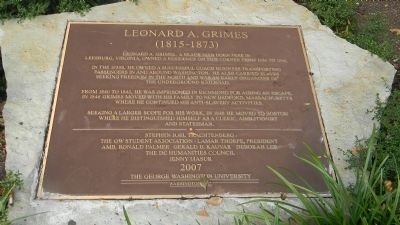 Leonard A. Grimes- abolitionist and driver for the Underground Railroad successfully transported fugitive slaves to the North. 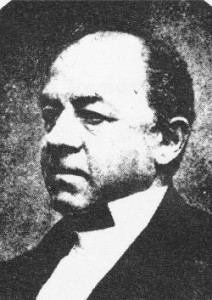 Leonard Grimes was an ordained minister for the Twelfth Baptist Church which was home to many freed and fugitive slaves. 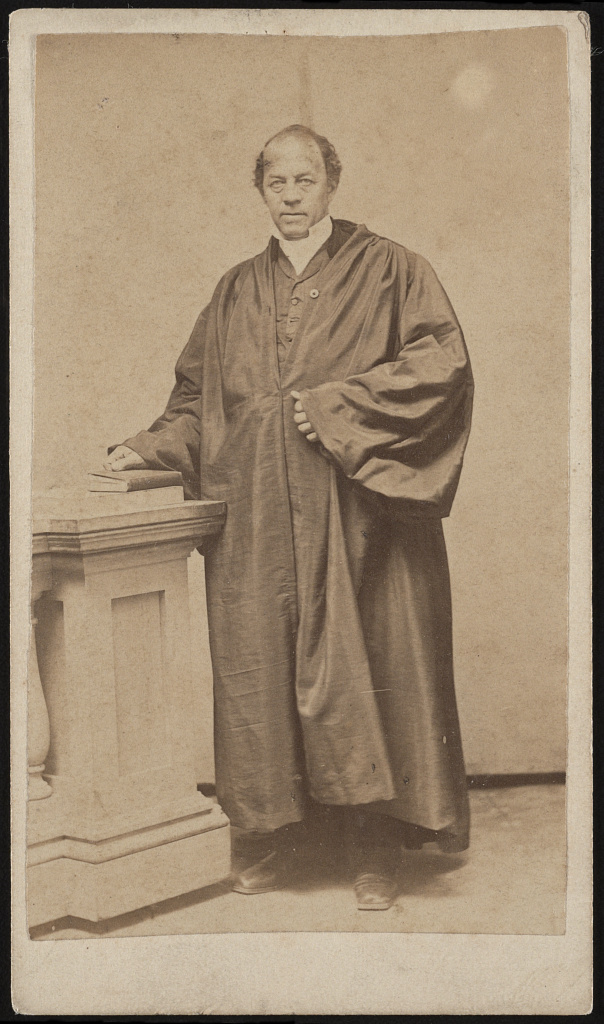 Leonard Andrew Grimes was born to free parents on November 9, 1815, in Leesburg, Virginia. He became an orphan at ten years old and was sent to live with his uncle. His life there was not a good one and he refused to return. He moved to Washington D.C. and had several jobs during the beginning of his time there. He first worked as a butcher’s boy and a clerk at an apothecary before he was eventually hired by a slaveholder. During his employment with the slaveholder, he became his trusted confidant and traveled the south with him.

It was during this employment and travel that he witnessed the beating of an enslaved woman and started him on his path of resistance. When they returned from that trip he was able to help with his first escape. An abused slave fled to his employer’s plantation and he helped her begin her escape to Canada. Grimes then used his savings to buy a couple of stagecoaches and horses and became a successful hackman. He grew his business by transporting paying clients of the city while using his stagecoaches as transportation for fugitive slaves through the Underground Railroad.

He married in 1833 and purchased a home with his wife in 1836. This marker is located at the site of the house they owned until 1846. While living in Virginia he continued working with the Underground Railroad until he was caught. In 1839 he helped a female slave escape to the North with her children and was arrested for his role several months later. In 1840 he was sentenced to a $100 fine and two years of hard labor.

After he was released from prison they moved to New Bedford, Massachusetts but did not give up his anti-slavery efforts. In 1848 Grimes and his family moved to Boston, Massachusetts where he became the ordained minister of the Twelfth Baptist Church, which became known as The Fugitive Slave Church. One of the notable action he took during his time here was to take in fugitive slave Anthony Burns in 1854. When Burns was arrested Grimes helped lead his fight in court but the judge ordered Burns return to the slaveholder from whom he escaped. Grimes turned to another method and raised enough money to purchase his freedom and free Burns from slavery.

Grimes continued his quest to abolish slavery by helping slaves escape to the North. When the Civil War started, he added campaigning to allow Black men to enlist in the military to fight for their rights. His, and others, efforts were successful in 1863 when the 54th Massachusetts Infantry, one of the first Black troops was created. Leonard A. Grimes passed away on March 14, 1873, after a sudden illness.