University students from nearby black colleges chose the Woolworth building for the site of one of many sit-in protests in Nashville, Tennessee on February 13, 1960. The students protested the segregation of the dining counter in the Woolworth building. They were faced with backlash and violence but continued to protest until May 10, 1960, when six of the nearby segregated establishments agreed to serve all people regardless of race. 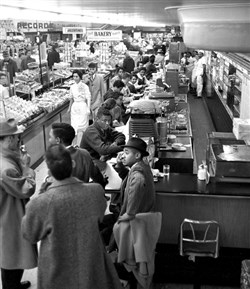 The home of Z. Alexander Looby, a black Civil Rights Attorney, was bombed on April 19, 1960. On that same day, four thousand students, including U.S. Congressman John Lewis marched together to the Nashville courthouse to meet Mayor Ben West head-on. One protester asked if the segregation of lunch counters was morally right, and the mayor answered no. Consequently, April 19, 1960, was the day that began the desegregation of downtown Nashville lunch counters.