Clendenin is a former boomtown of sorts that rose to local prominence alongside the oil industry on the Elk River. The town has a long history starting with some of the first families to settle the area at the confluence of Big Sandy Creek and Elk River. Here was the site of the first Union Carbide plant in the 1920s, and Clendenin is considered by many as the birthplace of the modern petrochemical industry. Clendenin's history is full of advancements and change, but recent flooding in 2016 has derailed the town and left the future unclear. 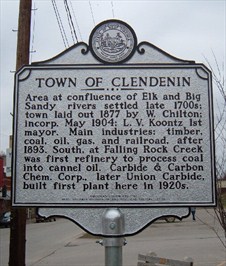 George Clendenin, namesake of the town. 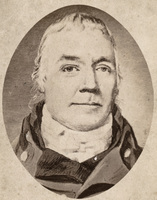 Opposite of historical marker 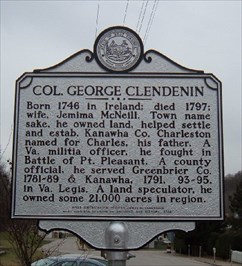 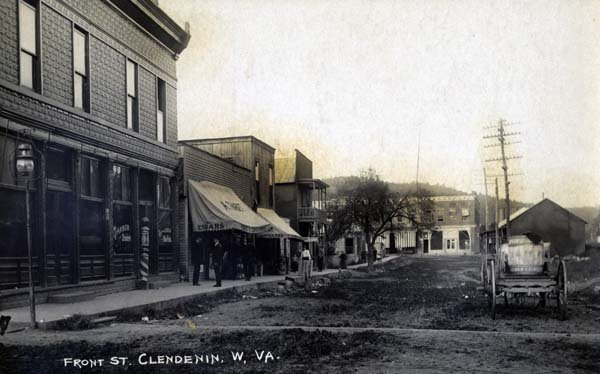 Photo of Clendenin from the early 20th century. 2. 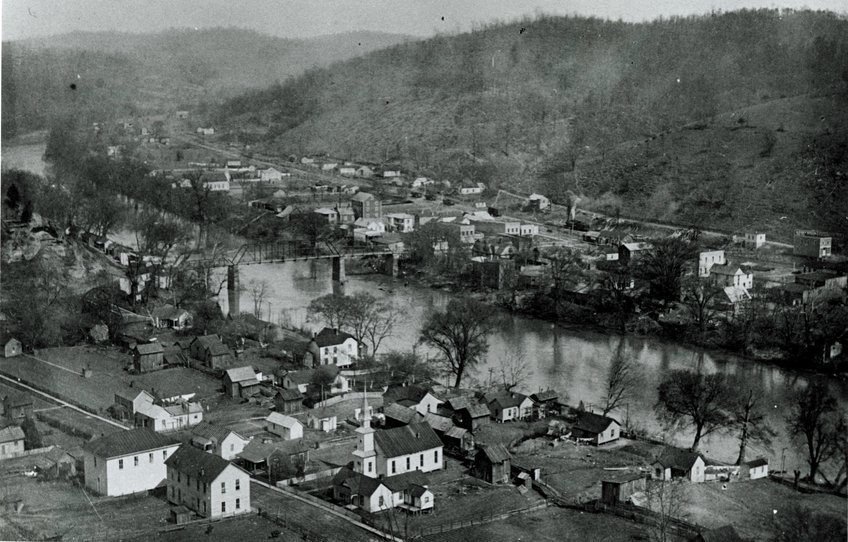 Clendenin was named in honor of Col. George Clendenin, local hero of the 1774 Battle of Point Pleasant who also helped settle and establish Kanawha County and Charleston, which was named after his father, Charles. The first families to settle in the area now known as Clendenin are familiar local names even to this day: Price, Jarret, Youngs, Stricklen, Hays, Woods, and Davis. Early settler Arch Price was rumored to have killed one of the last buffalo on the Elk River, while another early settler named Dr. Cobb arrived in the area by 1808.

Initially, the area was mostly small family farms until cannel coal was discovered on the Elk River in 1848. This discovery prompted the construction of a cannel coal distillery a short distance downstream in Falling Rock. The emergence of timbering and the creation of the distillery gave Clendenin its first two significant industries. Economic prospects took off drastically with the opening of a railroad between Charleston and Gassaway in 1893.3

Clendenin began to see an overwhelming period of growth in the early 20th century, which allowed the town to incorporate in 1904. During this period the town was described as old, with plenty of shops and a place where the churches were full. By the 1910 census, the town boasted a modest population of 815 people. Also, in 1910, construction of waterworks began in town, allowing for a hose and ladder fire department to be created in place of the previous "bucket" fire department. However, most people did not enjoy the use of electricity until after the 1920s. It was during this period that the town saw some of its first paved streets, which replaced the old dirt roads.4 Clendenin initially had three banks, with the first being the First National Bank founded in 1903. Next came the State Bank in 1910 and the Farmers and Citizens Bank in 1915. Only the Farmers and Citizen bank survived the Great Depression, and the building still stands downtown. To this day, historic buildings cover the downtown area. In fact, much of the downtown area is listed on the National Register of Historic Places.

Clendenin has a rich history of industry stretching back to timber and cannel coal in the 19th century. However, most of this early growth in the town is fueled by the development of the nearby Blue Creek Oilfield which opened in 1912. The oil boom on the Elk River lasted for about a decade but left a lasting impact on the town with the nearby Elk Refinery and Cobb Compressor Station (later Columbia Gas Plant) providing a stable economic base for the town. The Elk Refinery closed in 1982 due to expenses related to modernizing the refinery, and Columbia Gas closed their site after the 2016 flood. In the 1920s the Union Carbide Corporation was founded and opened its first plant in Clendenin to produce ethylene and propylene. Initially, the Union Carbide plant was planned for Buffalo, West Virginia, but fire made the site unsalvageable, and the company decided on Clendenin. One Carbide official speaking about the first plant in Clendenin said the company produced: "mostly, a lot of mistakes."1 In 1923, Carbide leased a portion of land in South Charleston so the company would have more room to develop. Upon completion of the South Charleston site on Blaine Island the growing company left Clendenin.

Flooding has plagued the Elk River and Clendenin for a long time. The town had experienced significant flooding in 1888, 1918, 1932, and 1937, with the 1888 flood being the worst on record up until 2016. In 2016, the massive flooding broke the 1888 record by a foot when it crested at 33 feet.1 The 2016 flood submerged most of the town's homes and businesses, causing massive amounts of damage and forcing many to leave town. Losses from the flood and the closure of industrial plants have had a profound impact on the local economy. Additionally, both local schools – Herbert Hoover High School and Clendenin Elementary – were destroyed in the most recent flood and are being rebuilt in locations downriver closer to the town of Elkview. However, the town is trying to make inroads with small business development and promoting tourism to the area through recreational activities. Most of these new activities are focused on the Elk River and kayaking, with a new service offering rentals and shuttle services opening in 2018.

Clendenin has a long, and sometimes, tragic, history that is rich and representative of West Virginia. The town was dependent on the growth of industry and has fallen victim to several unforeseen natural disasters that have hastened the most recent decline. However, those who remain are still resilient and optimistic for the future. Hopefully through efforts to diversify the town can become sustainable and reverse the most recent downswing.