Drake Well, originally known by the skeptical townsfolk as Drake's Folly, was the first well which successfully, intentionally brought crude oil to the surface. Drake Well Museum and Park is located where Edwin L. Drake struck oil for the first time on August 27, 1859. His well was located in Titusville, Pennsylvania. The museum preserves and shares the history of the site, and its role in giving birth to the modern petroleum industry. Working oil derricks, informational videos, exhibits and structures are all utilized to this end. The property also boasts the oldest continually producing oil well in the world - McClintock Well #1 - which visitors are free to observe.

The Drake Well Museum interprets and shares the history of the birthplace of the petroleum industry. 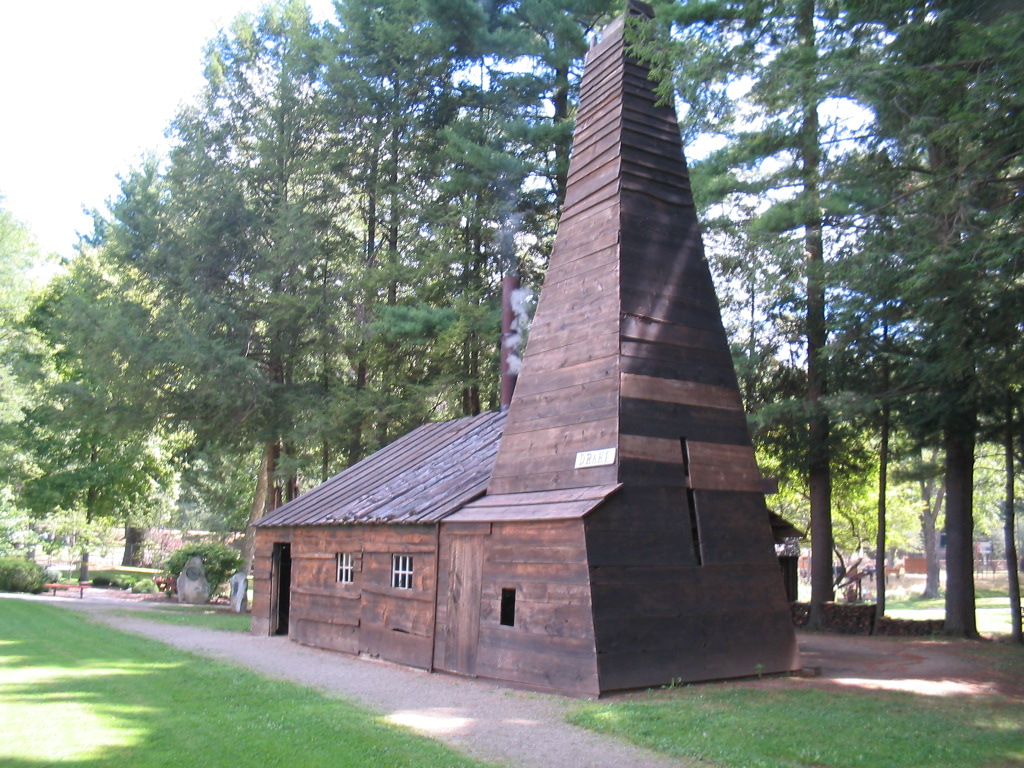 The museum produced this brochure which offers an introduction to the museum and the history of the site. 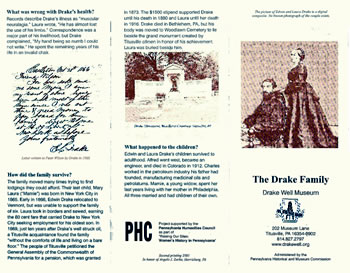 Oil was not always the "Black gold" we think of today. For years, it was simply regarded as a messy by-product of salt wells. It was occasionally bottled and sold as a cure-all to gullible settlers (the subsequent vomiting caused by its ingestion was thought to be positive, a sign of the body righting internal disturbances). However, in the 1840s it was discovered that crude oil could be refined to produce a long-lasting, bright flame for a lamp. This discovery eventually destroyed the whaling industry, which relied on consumer dependence on whale blubber to light their lamps. Still, it was not until 1864 when someone set out to deliberately drill for oil. Before this time, oil was collected through either scooping it off the surface of a river or soaking it up in a rag as it bubbled from the ground. Though Edwin Drake was mocked by the people of Titusville, he proved them wrong when his well brought a flow of crude to the surface in 1864.

This ignited "oil fever" across the nation - recently discharged Civil War veterans flocked to oil boom towns, speculators raced to buy up land, preachers praised this miraculous new resource, and young adventure-seekers struck out for the oil regions in the hopes making an instant fortune. Millionaires were made and unmade overnight - one of the most famous being Coal Oil Johnny, a farm boy-turned-spendthrift who famously spent the modern equivalent of over $8 million in under a year before returning home, penniless. The subsequent discovery and harnessing of natural gas lead to the founding of several gas and oil companies that are still in operation today - Pennzoil, Wolf's Head Oil, and Quaker State among them. As the nation's fervor calmed, the oil regions quietly left their history of Rockfeller monopolies, fantastic riches, and boom towns behind. The hills, once "swaying with derricks", now once again sway with trees. Though ruined camps, ghost towns, and residual oil wells may be found across the northwestern part of the state, for the most part this region has recovered from the rush for riches.

Drake Well Museum was completed in 1963. The museum offers exhibits, demonstrations, and videos. It also features special events and provides educational programs related to the oil industry. The events shown at the museum help tell the stories of Pennsylvania history, dealing with oil from the early Native American civilizations to the present day. The Drake Well Museum displays artifacts and documents that were collected thirty years after Edwin L Drake's death in 1880. The other artifacts on display at the museum where donated by succeeding generations. All these artifacts and donations help to explain the oil industries birth, technology, and national impact in the early years. The museum also showcases working oil field machinery along with reconstructed historical buildings that were places along Oil Creek from the original oil drilling site. With the help of the machinery, the buildings, documents and artifacts left behind, we can better understand the technology use by the early oil industrial heritage.