Hinkle Fieldhouse is situated on the campus of Butler University in Indianapolis, Indiana. The fieldhouse is the sixth-oldest active basketball arena in the United States and was the largest in the nation from the time of its construction in 1928 to 1950. The structure was added to the national register of historic places in 1983 and was designated a national historic landmark in 1987 for the role it played in the development of college basketball on both a state and national level.

Hinkle Fieldhouse, built in 1928, rises over six stories above the campus of Butler University. 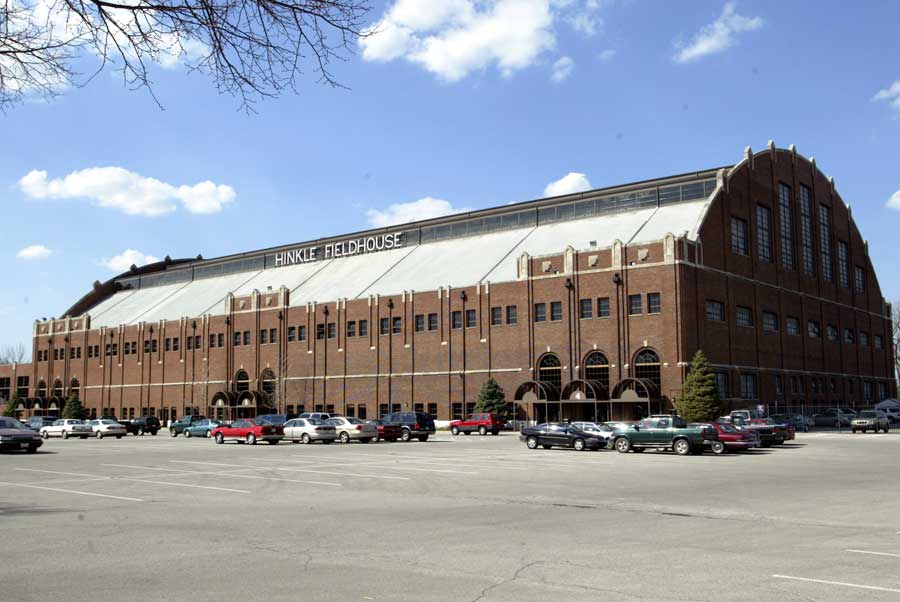 This new video scoreboard was added to Hinkle in 2014. 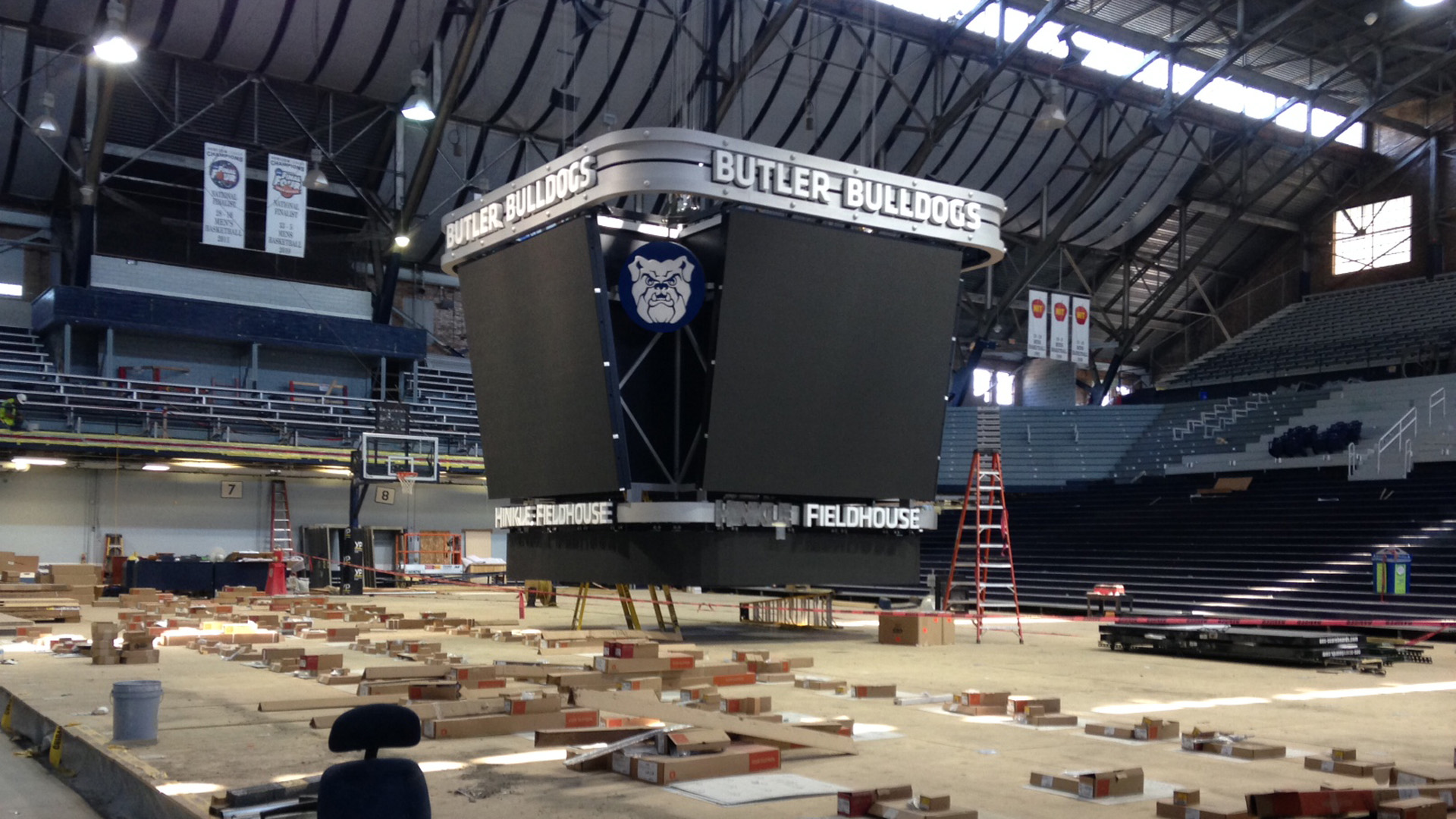 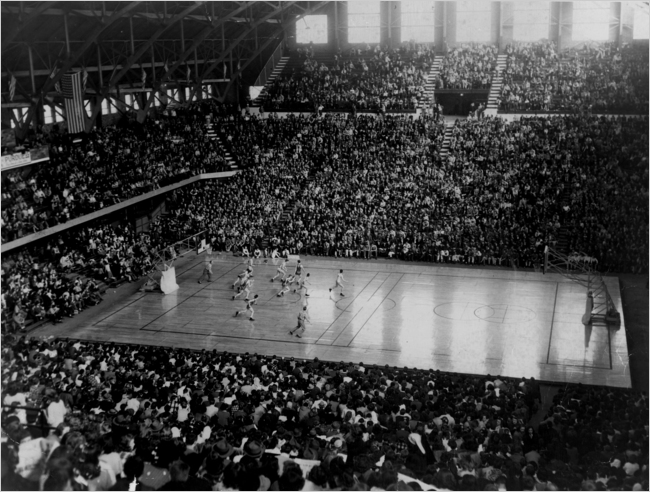 The floor with its original east/west configuration with the setting sun shining onto the court. The layout was altered in 1933. 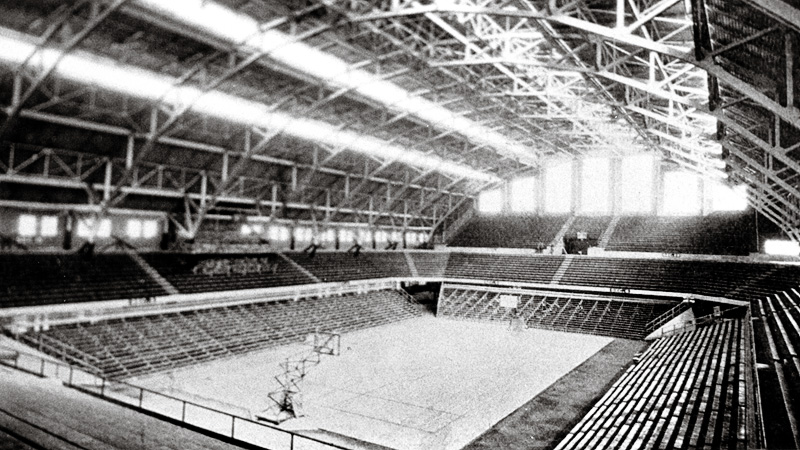 Even in a basketball crazed state, “Indiana’s Basketball Cathedral,” as Hinkle Fieldhouse is known, holds a very special place.  It was designed by Indianapolis architect Fermor Spencer Cannon and has become one of the country’s great basketball arenas.  Cannon designed it to accommodate the changing nature of the game as players moved up and down the court at a quicker pace and the walls and crowds needed to be moved away from the court.  It also allowed 15,000 people to watch the game they loved.

As plans for the design and construction of the arena were being developed, a deal was struck between Butler University and the Indiana High School Athletic Association. The association agreed to finance the cost of the arena at $1,000,000 in exchange for a lease agreement that allowed the annual state high school basketball tournament to be hosted at the facility. The state tournament was held consistently at the arena from 1928 to 1971 except the years (1943-1945) when the structure was used as a barracks for the US Navy and the US Army Air Forces during WWII.

Originally known as Butler Fieldhouse, its name was changed in 1966 to honor long-time coach Paul “Tony” Hinkle, who coached for over 40 years and has over 630 wins to his credit.  The Fieldhouse has also undergone numerous changes and renovations.  Its court, which is still original, was reconfigured from an east/west alignment to a north/south one to allow better spectating and to prevent the setting sun from shining in the player’s eyes.  It was renovated in 1989 and its capacity was reduced from 15,000 to just over 11,000.  Various offices were renovated in 1992 and its capacity was reduced again during a major renovation in 2011 as many bleachers were replaced with backed chairs.

In 2011 the area that once housed the pool, which was removed in the late 1990s, was redesigned as a 3-floor complex with work-out rooms, an academic center, training facility, and administrative and coach’s offices.  The most recent, $36 million renovations occurred in 2014 in which the concourses were widened, a new scoreboard with video playback added, over 9,700 windopanes replaced and locker rooms expanded into suites

Aside from the hundreds of Butler Bulldog games at Hinkle, it has also hosted Olympic basketball trials, the first ever USA vs. USSR basketball game and ABA and NBA all-star games.  It has also been used for more than “just” basketball as Hinkle has hosted numerous presidents, such as Herbert Hoover, Dwight Eisenhower, Richard Nixon and Bill Clinton, as well as presidential candidates and evangelist Billy Graham.  It has been used for indoor track meets, tennis matches, marathon bicycle races and circuses, among other things.  Finally, Hinkle Fieldhouse hosted the 1954 Indiana state high school championship game between Milan and the larger Muncie Central.  Coach Dale, Jimmy Chitwood, Buddy Walker and the rest of the Hickory basketball team were then fictionalized to recreate that game in the 1986 hit movie, Hoosiers.

Hinkle Fieldhouse is located in Indianapolis,Indiana and serves as the home basketball court to the University of Butler mens and women's basketball teams. Hinkle was built in 1928 and at that time, it was the largest basketball arena in the United States. It held onto that distinction until 1950. It is the sixth oldest college basketball arena still in use and is part of the National Register of Historic Landmarks. The fieldhouse was part of a movement in college basketball that helped completely transform the game by making it a faster more up-and-down the court kind of game. Hinkle has played a part in many historic moments, movies, and basketball games.

Nicknamed ‘Indiana's Basketball Cathedral', Hinkle has played a major role in the development of basketball in Indiana. Butler signed a lease to allow the Indiana State Basketball tournament to be played there in order to get a corporation of 41 businessmen to finance the building for $1,000,000. The tournament was played there from 1928 to 1971 with the exception of 1943-1945 when the building played host to US forces as barracks during World War II. The tournament produced one of the greatest moments in the history of basketball when small school Milan High beat the state powerhouse Muncie Central to win the 1954 state championship. This game was so historic it played as the basis to one of the greatest sports movies ever made, Hoosiers which was largely filmed inside of Hinkle Fieldhouse in 1986.

The fieldhouse was originally named Butler Fieldhouse, but was later renamed in honor of the legendary coach at Butler Tony Hinkle. He coached basketball at Butler for 41 years and retired in 1970. Hinkle Fieldhouse has played host to many other historic games. In the first ever matchup of two top 15 teams in Hinkle Fieldhouse history on January 19, 2013, the Butler and Gonzaga Bulldogs faced off in an epic matchup. The game went down to the wire in front of a sell-out crowd of 11,043. The fans that were in attendance all rushed the court following the last second shot from Roosevelt Jones to beat Gonzaga. The fieldhouse has served as host to many US presidents, as well as the olympic basketball trials. It also played host to the first ever USA and USSR basketball game.

Hinkle fieldhouse breathes history as soon as you walk through the doors. You walk around the building and see all of the things you saw in Hoosiers, and visualize the movie happening when you see the court for the first time. It is a college basketball fans Hajj. If you love basketball and history you have to visit Hinkle Fieldhouse. There is not a better place in America to watch a basketball game. The Bulldogs have one of the best small school basketball programs in the country and are sure to put on a show in whatever game you attend. As many Butler fans exclaim when asked about Hinkle's history, “THERE'S NO PLACE LIKE HINKLE!” That's true too. The history speaks for itself.