A 14 foot tall bronze statue memorializing John Glover, an American brigadier general who fought for the Continental Army during the Revolutionary war stands at 60 Commonwealth Avenue. The regiment which he commanded, named the "Marblehead Mariners," was known for its impressive command of the sea and is notable for saving Washington's army after the Battle of Brooklyn. 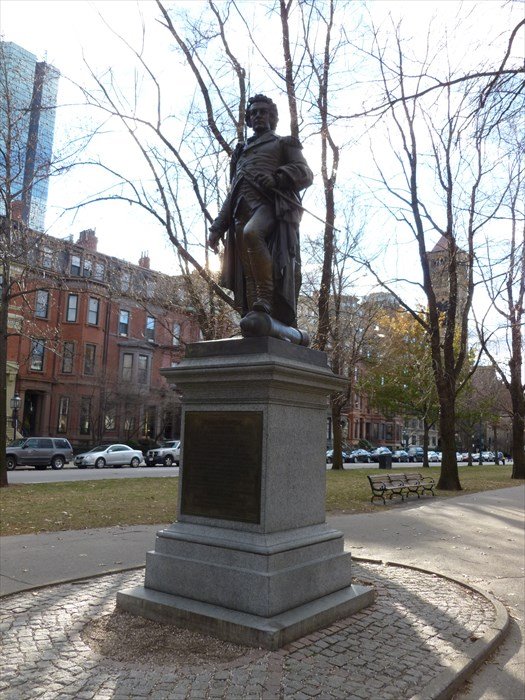 On Commonwealth Avenue, in the very heart of Boston, stands a towering bronze statue of General John Glover from Marblehead. The statue, a gift to the city of Boston from Benjamin T. Reed, depicts Glover wearing his military uniform, wielding a sword, and resting his left foot on a cannon. The statue is quite large, standing 8 feet tall atop a 6.5 feet high granite base. Martin Milmore, one of the most famous Civil War sculptors of his time created the statue in 1875. While the success of Milmore’s more famous Civil War Memorial built in 1860 overshadowed this smaller statue, its commanding presence on the Commonwealth Mall has kept Glover’s memory alive.

Glover, a self-starter, traded with Spain and Portugal through the fishing industry and soon became one of the most successful and influential American fisherman of early colonial times. After the outbreak of the war he rallied a naval battalion of about 500 sailors, notably of Jewish and African-American decent, and created the 14th Continental Regiment, which became known as "Marblehead Mariners"

During the War, Glover and his regiment saved the Revolutionary Army numerous times and prevented premature loss. The first of these occasions was when General Washington requested that the Continental Army be evacuated after the Battle of Brooklyn. The only possible means of retreat was across the exposed East River. Glover immediately complied and his regiment took only one night to evacuate the entire army, preventing it from being crushed by the British. Soon after this success, Washington picked Glover's regiment as one of three to defend Manhattan. Realizing these regiments were severely outnumbered, Glover designed a strategy to hide the men behind walls, and retreat backwards as the British soldiers entered the city. This guerrilla tactic proved enormously effective, as the British did not realize where the soldiers were, allowing Glover's men to attack without threat of retaliation. Finally, when Washington was planning the attack on the Hessians in New Jersey, Glover agreed to ferry them promptly across the Delaware River without alerting the British. This last action seemed to be the last major military action that Glover would take and in December 1776, Glover and his regiment disbanded. Glover returned home to spend time with his family and sick wife. However, Washington soon promoted him to brigadier general and the initially hesitant Glover ended his military career with successful service during the Saratoga Campaign.

During the Saratoga Campaign, he further saved his brigade (and numerous other attacking units) when a redcoat deserter approached Glover and told him that the brigade he was leading was moving into a British ambush. Glover questioned the man and threatened to kill him if the information he provided was false, but the defector stuck with his words. Glover, understanding that the army was approaching a trap, immediately ran back to notify his acting superior General Gates. This action of trust saved the army from defeat. After this failed ambush, Burgoyne (the British general) soon surrendered. Glover's brigade was given the honor of guarding the captured British as they marched back to Massachusetts.

From all of his actions in the war, it is clear that Glover’s statue is an appropriate memorial to his efforts. His strategies and integrity helped changed the tides of war to American favor. While he may not have been as well-known as Washington or Hamilton, his military influence and leadership during the war make him a worthy candidate for remembrance and Milmore’s powerful statue is a poignant memorial that keeps Glover alive.

A bronze plaque affixed at the base of the statue details Glover's effort in the war. The final words of the plaque summarize his influence:


"BY HIS COURAGE, ENERGY, MILITARY TALENTS AND PATRIOTISM, HE SECURED THE CONFIDENCE OF WASHINGTON, AND THE GRATITUDE OF HIS COUNTRY."

1 John Glover, Overlooked Hero of the American Revolution: Sculpture in our Parks. Friends of the Public Garden. February 14, 2018. . https://friendsofthepublicgarden.org/2018/02/14/john-glover-overlooked-hero-of-the-american-revolution-sculpture-in-our-parks/.