At this location on December 5, 1959, African American students at Fisk University held a short "trial" sit-in protest against the Cain-Sloan Department Store. This small demonstration was held in preparation for a much larger demonstration by students at this and other department stores on February 27, 1960. These demonstration were part of a citywide campaign against segregated lunch counters and other discriminatory practices in Nashville. 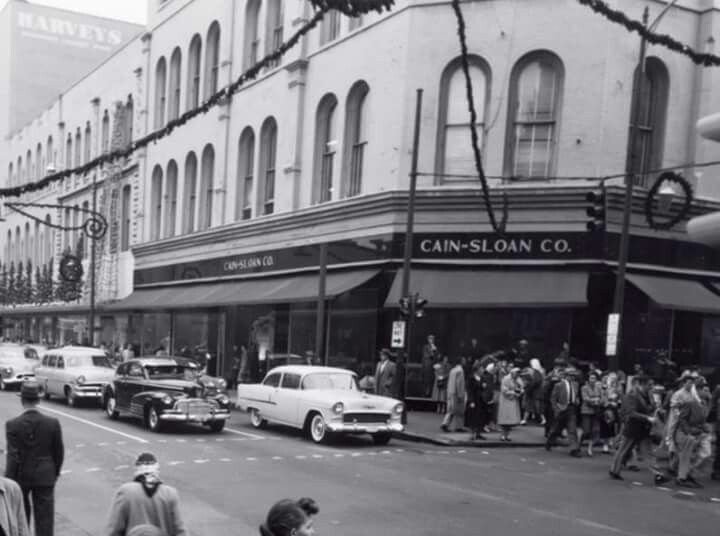 On November 28, 1959, twelve university students met with James Morris Lawson Jr., a church minister, pastor Kelly Miller Smith, pastor of the First Colored Baptist Church (FCBC), and other Nashville Christian Leadership Council (NCLC) members at the First Colored Baptist Church. The church leaders drove the university students to Harvey’s Department Store. Despite having many Black customers and a reputation for being polite, the lunch counter of this store was reserved for white patrons similar to other downtown Nashville stores.

When the students arrived, they bought some small items and went to the lunch counter to ad requested service. The manager refused to serve the Black students and the two white students joined their peers from Fisk University. The students left the store after being refused service. They went back to the FCBC where they continued to have nightly meetings and plan their next move.

On December 5, 1959, eight students staged a second protest at the Cain-Sloan Department Store lunch counter. They were refused to serve when the manager turned them away by reciting their policy to not serve Black individuals. The students were polite and left. They went to the FCBC for more lessons on the mechanics of nonviolent protest.

Sit-ins in Nashville, Tennessee had begun on February 13, 1960, which was two weeks after four North Carolina Agriculture and Technical school students held a sit-in protest at Woolworth’s in Greensboro, North Carolina.

The sit-in and police action began a two-month standoff between the African American student protesters and a few white supporters and white business owners and city officials. The student protesters were gassed with insecticide, spit on, and had food and drinks dumped on them but persisted in their nonviolent protest.

The Black residents of Nashville joined the students, using their economic power as consumers while the students put their bodies in harms way. The adults boycotted downtown stores that refused to serve the students. In retaliation for the protests and boycotts, the home of Z. Alexander Looby, a Black attorney who represented the students, was bombed on April 19, 1960. No one was hurt but the attack increased tensions. Immediately after the bombing, the students and other protesters began walking to Nashville Mayor Ben West’s office.

The march to Mayor Ben West’s office was led by Fisk University junior Diane Nash and minister C.T. Vivian. Behind them, thousands marched to City Hall to confront the mayor. Mayor West met them outside the building. Minister C.T. Vivian delivered a  powerful sermon for the growing crowd. At this point, Nash began questioning the mayor. Nash asked, “Then, mayor, do you recommend that the lunch counters be desegregated?” Mayor Ben West replied with “yes.”  This small act of leadership by the mayor proved to be a turning point for the peaceful desegregation of downtown Nashville lunch counters, but not without continued pressure by students and civil rights leaders.

Three weeks after confronting the Mayor West at City Hall, Black students and white residents of Nashville ate at the lunch counters together. Nashville was the first city in the South to desegregate. The sit-ins held in Nashville, and initially in Greensboro, North Carolina, inspired others in the South to protest and enabled them to see that victory was becoming reality.

The original Cain-Sloan Department Store building was originally located across the street. The store expanded into St. Cloud's Corner by 1960 and the original building was demolished to build a parking lot.