Shortly after the founding of Elkins, West Virginia, in 1889, local residents established a chapter of the International Order of Odd Fellows. The organization reflected the spirit of the Progressive Era with its emphasis on self-improvement and service to the community. In the early 1900s, the Odd Fellows raised funds to create this home for orphaned children and the elderly. West Virginia had several homes that were operated by the state, but when this home opened in 1910, Elkins was the only city in West Virginia to have a charitable home operated by a fraternal order. In its early years as a charitable home, members of the Elkins Odd Fellows organized community events and started a marching band. Over subsequent decades, the Odd Fellows home of Elkins continued to serve as an orphanage and place of care for older adults, and widows suffering from economic hardship. The home continues to operate just as it did a century ago, but with the slow decline in membership of fraternal orders, the old fraternal house now serves as a nursing home. 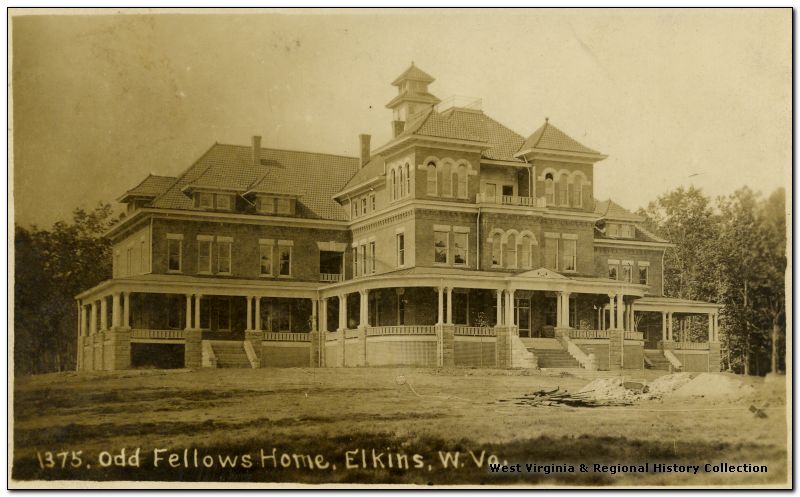 The Elkins Odd Fellows Marching Band, circa 1923. Exact location of the marching band is unknown. 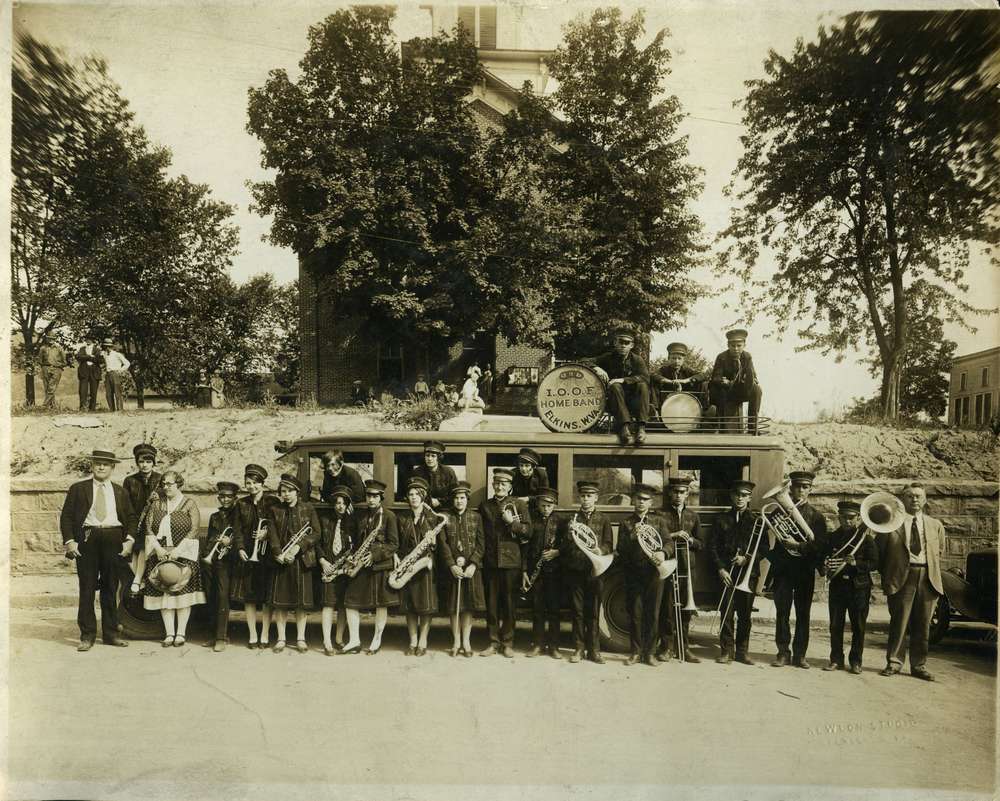 Odd Fellows Staff and orphans during the early 1920s. 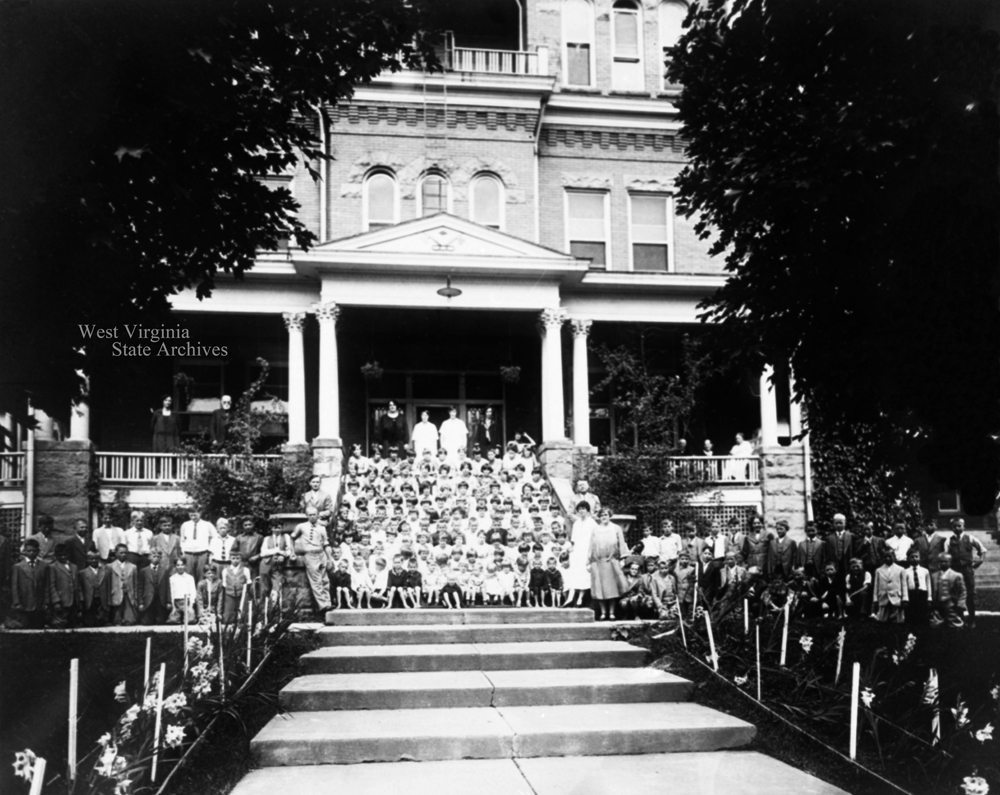 The dining hall in the Odd Fellows fraternal home in Elkins.

As the state of West Virginia grew after the Civil War, residents across the state established and joined fraternal and benevolent societies. These organizations sought to promote the well-being of their members and often emphasized care for the less fortunate that reflected the spirit of the Progressive Era. Fraternal orders in America and Europe had long made social welfare a cornerstone of their mission, and the Odd Fellows was established in Europe for the specific purpose of caring for members and the less fortunate.

During the early Industrial Age and in response to the Poor Laws of England, middle-class workers formed the Odd Fellowship in the late eighteenth century. “Members in dire circumstances could freely appeal to “brothers” for aid; the order also guaranteed members a decent burial.”[1] As the Odd Fellow organization evolved in England form the late eighteenth century to the early nineteenth century, the fraternal order spread to the United States, and the first American chapter opened in Baltimore, MD in 1819. Throughout the century, the Odd Fellows organization grew steadily in the United States along with many other benevolent societies and while continuing ritualistic practices, many benevolent groups focused on charitable deeds. “The last third of the nineteenth century was a time of dramatic proliferation of voluntary associations. The population of America’s towns and cities was multiplying rapidly, and the number of organizations was growing even faster.” The rapid increase of fraternal organizations during this time reflected the growing social, cultural, and economic problems many Americans faced during the Victorian age.

With very limited social safety nets in place for Americans during the nineteenth century, fraternal organizations offered people a means to alleviate to some degree, their social and economic hardships. Alternatively, as historian David T. Belto put it: “The fraternal society was far more than another device to address deep-seated cultural, psychological, and gender needs. It allowed Americans to provide social welfare services that could be had in no other way.”[2] Whereas government and private aid reflected the social, cultural, and racial trends of the late nineteenth century and early twentieth century, social welfare assistance dispensed in a very limited manner. Principled ethics of reciprocity dictated fraternal organizations offering of social and financial aid to Americans. The Odd Fellows established trends in relief aid by creating a schedule for benefits. “Each member when taken sick could claim a regular stipend per week (usually $3.00 to $6.00) to compensate for working days lost.”[3] The Odd Fellows also used different language when referring to the monetary aid they provided, and used the term benefits or rights as compared to the term charity.

The rise of orphaned children in the United States by 1880 had reached 50,579 and increased to 142,971 by 1923. Caring for orphaned children became a common practice for many fraternal organizations, including the Odd Fellows, the Loyal Order of the Moose, and the Masons. "Out of all the fraternal societies, however, two stood out the most, the Odd Fellows and the Masons." As the geographic spread of Odd Fellows chapters emerged across the United States, chapters opened in West Virginia following statehood and through the subsequent years of the nineteenth century. One West Virginia chapter that developed in the early twentieth century was the Odd Fellows of Elkins, West Virginia.

When the 1920/1921 school year commenced, the Odd Fellows once again did not pay the tuition fees, and so the school board sued the fraternal organization. Because West Virginia law at that time required school-aged children to attend school, the judge presiding over the case ruled that nonpermanent domiciles did not justify charging orphans tuition in a free school district. The judge also acknowledged that the Odd Fellows were never obligated to pay tuition because only one school existed for the orphans to attend in Elkins, and despite being orphaned, they indeed resided within the closest school district, and thus qualified to attend the free school of Elkins without charge. As of today, the Elkins Odd Fellows are still an operating fraternal order focused on community service.

“Haven for the Aged and Orphans of the Order Now Ready.” Clarksburg Weekly Telegram, November 18, 1909.

Grand Lodge, I. O. O. F., of West Virginia v. Board Of Education Of Independent School Dist. Of Elkins et al. (No. 4463). As listed in the National Reporter System—State Series: The Southeastern Reporter, Volume 109, Permanent Edition—Comprising All The Decisions Of The Supreme Court of Appeals. December 10, 1921 – January 21, 1922. St. Paul: MN, West Publishing Company, 1922.