Constructed in 1923 by the Supreme Lodge of the Woodmen of Union, an African American fraternal organization, this building served multiple purposes and was the center of life for African American residents throughout the area. The building included guestrooms and housed numerous African American athletes and entertainers. Hot Springs, Arkansas was a town with a reputation as a health and recreation resort that was famous for its hot springs and beautiful surrounding landscapes good for hikes and other outdoor activities. As its reputation grew in the latter half of the 19th century, wealthy people began to stay there and soon after, in 1886, baseball was brought to the town. The town also became famous as the place players went for spring baseball before the regular season began. By the early 1920s, Black teams also began to stay and play baseball in the city during the spring.

Built in 1923, the National Baptist Hotel was quickly established as the center of African American culture in the town and it became known as the place that Negro League players or Black entertainers would stay when they were in town. 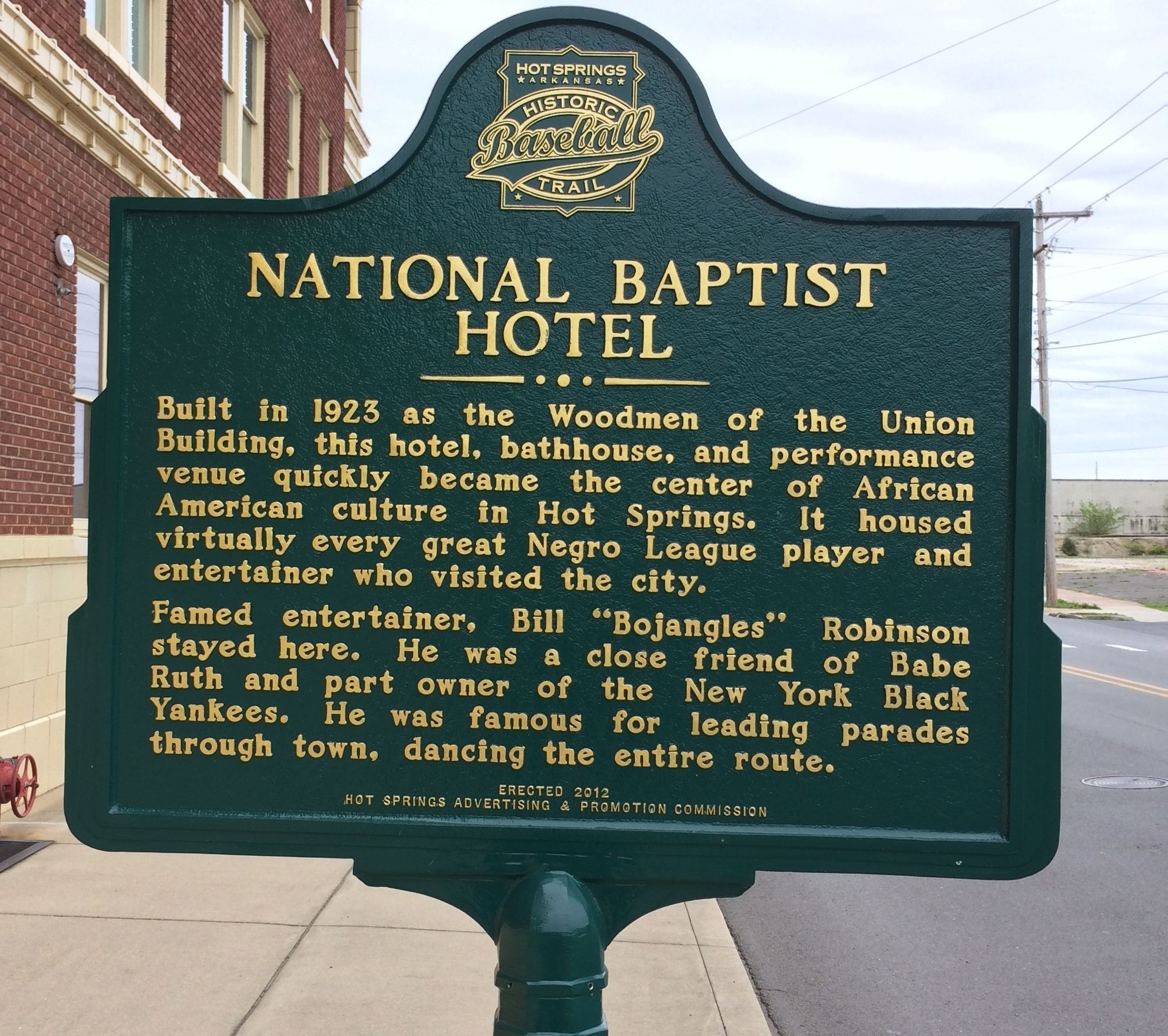 The town of Hot Springs, Arkansas became a well-known health and recreation resort during the last half of the 19th century. The town's famous hot springs, mountain trails, resort hotels, bathhouses, and many amenities attracted the wealthy to begin spending their time there on vacation. With the wealthy came the owners of sports teams and the famous baseball players themselves (such as Babe Ruth, Hank Aaron, Buck Ewing, Cap Anson, and Mickey Mantle) and they saw the town for its potential to be able to train for the season in the spring. The fervor was kicked off in 1886 when Cap Anson brought the Chicago White Stockings (became the Cubs) to the town. Soon after, multiple teams had fields and facilities in the town and hundreds of players trained here year after year.

With the introduction of baseball to Hot Springs, it became a prime destination for players to vacation and train. Many future Hall of Fame players and baseball legends spent their springs here. Babe Ruth has a sign at Whittington Park commemorating when he hit a 573 foot home run into an alligator pond. Cap Anson, generally regarded as one of the best players of the 19th century, liked to spend time here as well. Spread throughout the town are markers that talk about different players that stayed there and what they did in the town when they were there.

The baseball explosion in Hot Springs occurred in the late 19th century and throughout the 20th century. Much of the players that visited the town to play ball were white and it was like this for a few decades. In 1923, what became known as the National Baptist Hotel was built. This building would become the town's center of African American culture for many years. Whenever a Negro League player or a Black entertainer was in Hot Springs to play ball or do a show, this is where they would stay. The marker outside of the hotel says that famous Black entertainer Bill "Bojangles" Robinson stayed at the hotel. Robinson was close friends with Babe Ruth and a part owner of the professional the New York Black Yankees, a leading team in the Negro Leagues that once played and beat the New York Yankees prior to the decision of baseball commissioner Kennesaw Mountain Landis to bar games between Negro League and Major League teams.