The DeTour Reef Light is a non-profit operated lighthouse marking the southern entrance of the DeTour Passage between the eastern end of Michigan's Upper Peninsula and Drummond Island. The light is an automated active aid to navigation. It is said to be "the gateway to Lake Superior." In addition, many recreational boaters us the passage. The Light is located in Lake Huron, three miles south of the nearest town, DeTour Village, Michigan. 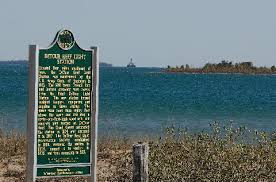 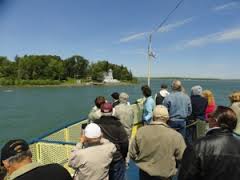 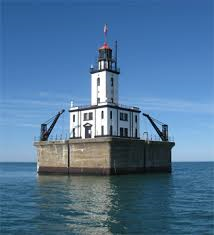 The DeTour Point Lighthouse stood seventy-eight feet tall and consisted of four levels of iron braces around a central, cylindrical shaft that ran from the top of the first level to the watchroom, situated just below the lantern room. The braces of the first level were vertical and placed at the corners of a twenty-six-foot square, while the upper three levels slope inward. The second floor of a new dwelling was attached to the tower by a covered passage. A spiral staircase inside the central shaft provided access to a decagonal watchroom and lantern room, each of which were encircled by a gallery.
The fourth-order lens from the old lighthouse was transferred to the new one in 1861 and served until it was replaced by a third-order lens that went into service with the opening of navigation in 1871. In 1902, the Lighthouse Board noted that a change in the light at DeTour was needed “to make it more conspicuous and also more definite,” and requested funds for a new lens. Congress appropriated $4,000 for a lens on March 3, 1905, and the light from a third-and-a-half-order, Barbier, Benard, & Turenne Fresnel lens was exhibited from DeTour Lighthouse for the first time on May 12, 1908. The lens had four flash-panels and revolved every forty seconds to produce bright white flashes, spaced by ten seconds. In June 1909, the illuminant was changed to incandescent oil vapor, increasing the intensity of the light sevenfold. A ten-inch steam whistle was established at the station in 1872, and in 1877 a second whistle was added as a backup. The signature of the whistle was an eight-second blast every minute, but in 1901 a second signature was added to inform mariners of conditions on the St. Marys River. When both the river and lake were foggy, the original signature was used, but if the lake were foggy and the river clear, the whistle would sound in this manner: eight-second blast, two seconds silence, three-second blast, forty-seven seconds silence. In 1906, a brick fog signal, measuring twenty-two by forty feet, was built to house the steam whistles, and the dwelling was converted into a duplex.
As an additional aid to mariners, an electrically operated submarine bell was placed offshore from the lighthouse in 1907, but when it was found that the bell was in a “hollow,” it was moved 1,700 feet farther out in the lake in 1909. In its new location, the bell, which was suspended inside a twenty-one-foot-tall tripod, was situated twenty-eight feet below the surface of the lake. Originally built and maintained by the Submarine Signal Company, the bell was purchased by the government in 1911.
The importance of DeTour Point for mariners was further emphasized in 1925, when a radio beacon was established there on October 9 and its fog signal was upgraded to a powerful air diaphone on November 16. The submarine bell was discontinued on June 15, 1927, and in 1929, the radio beacon and diaphone were synchronized to allow mariners to readily determine their distance from the point “by noting the time interval which elapses between the reception of the radio and sound fog signals.”  In 1928, the Bureau of Lighthouses requested funds to establish a modern lighthouse on DeTour Reef and relocate the light, fog signal, and radiobeacon there from the point, while maintaining the onshore residence for the keepers’ families. Placing the navigational aids closer to the track of vessels would reduce the number of casualties caused by ships running aground on the reef.
After having been constructed onshore, a sixty-foot-square and twenty-foot-high wooden crib was towed a mile offshore and sunk on a prepared site in twenty-four feet of water on July 25, 1930. The crib was then filled with rock and concrete, and a portion of its concrete pier was poured before it was marked with a temporary light and work was suspended for the season. Work resumed on April 25, 1931, and the concrete pier, which contained vaulted rooms for storage and machinery, was extended to twenty feet above the lake. An eight-and-a-half-foot-wide steel band was placed at the waterline to protect the pier from ice, and the top of the pier was flared out by two feet to prevent the pier’s deck from being washed by seas.
Upon this deck was erected the lighthouse proper, which was constructed of steel and cast iron throughout, backed up by solid masonry. The first two stories of the structure are 30 feet square, the second story forming the living quarters for the three keepers and the first story forming the upper part of the engine room and machinery space. With the exception of radio transmitting equipment, clock controls, etc., the machinery is all located at the basement floor level, 8 feet 6 inches above water level. This room is made considerably larger than the superstructure by vaulted spaces within the pier lighted both from the windows in the first story above and from deck lights in the pier proper. Radio transmitting equipment is located on the first floor gallery. A square tower rises from this 2-story structure supporting a 3 1/2-order revolving lens, the focal plane of which is 74 feet above the water level. The lens, lantern, and watch room from the old shore structure were utilized, as was also the fog-signal engines and equipment from shore. The same characteristics and candlepower were retained.  DeTour Reef Lighthouse, which cost $144,976, was placed in operation on November 10, 1931, with the land-based keepers relocating to the offshore station.