Fort Caspar was a military post of the United States Army in present-day Wyoming named after 2nd Lieutenant Caspar Collins, a U.S. Army officer who was killed in the 1865 Battle of the Platte Bridge Station against the Lakota and Cheyenne. Originally founded in 1859 along the banks of the North Platte River as a trading post and toll bridge on the Oregon Trail, the post was later taken over by the Army and named Platte Bridge Station to protect emigrants and the telegraph line against raids from Lakota and Cheyenne in the ongoing wars between those nations and the United States. The site of the fort, near the intersection of 13th Street and Wyoming Boulevard in Casper, Wyoming, is listed in the National Register of Historic Places and is now owned and operated by the City of Casper as the Fort Caspar Museum and Historic Site.

Fort Caspar Museum features a recreated 1865 army post on a major crossing point for pioneer settlers, Pony Express riders, mormons, and many others. 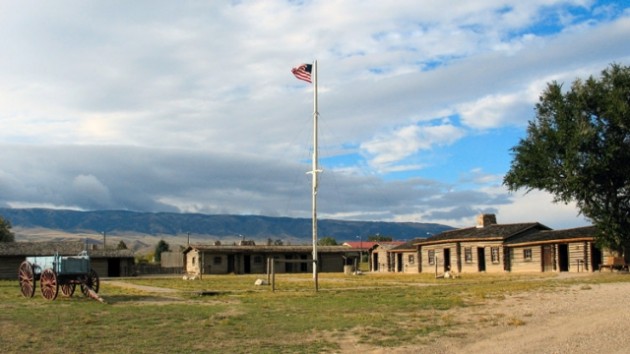 In July 1865, accompanied by survivors of the Sand Creek Massacre which occurred the previous November as part of the Colorado War, a party of several thousand Cheyenne and Sioux approached Platte Bridge Station from the north intending to attack the soldiers camped there, leading to the Battle of Platte Bridge.
As alluded to in the overview, the post was a key transportation and supply point in Wyoming. In addition to the pioneers traveling west on the Oregon Trail and the telegraph line, which crossed over on the bridge itself, others used the crossing as well. These included fur traders, mormons (who opened a ferry and supply depot here), and riders of the Pony Express from 1860-1861.
The post's importance began to decline in the mid-1860s. The army's focus shifted to the southern part of the state after the transcontinental railroad and new telegraph line were built to the south. In October 1867, the army officially abandoned the post and ranchers and homesteaders began moving in the area in the 1870s.