Originally built as a church in 1906, the Coolidge Corner Theater opened in 1933 after an extensive remodeling that resulted in the art deco style that has been preserved to this day. Over the years, the historic theater has played host to such leading figures in the cinema as Charlie Chaplin, Shirley Temple, Cary Grant, Katharine Hepburn, Ingrid Bergman, Errol Flynn, Humphrey Bogart, Marilyn Monroe, Marlon Brando, and James Dean, among many others. To this day the theater encourages young filmmakers every first Tuesday of the month to screen their shorts. An active community supports such events as the theater's midnight screenings of horror classics and annual 24 hour horror movie marathon on Halloween. The theater attracts a niche crowd, however anyone who walks into the big screening room cannot help but be awestruck.

Harvard St in 1936 - 3 years after opening just a small building to the left. 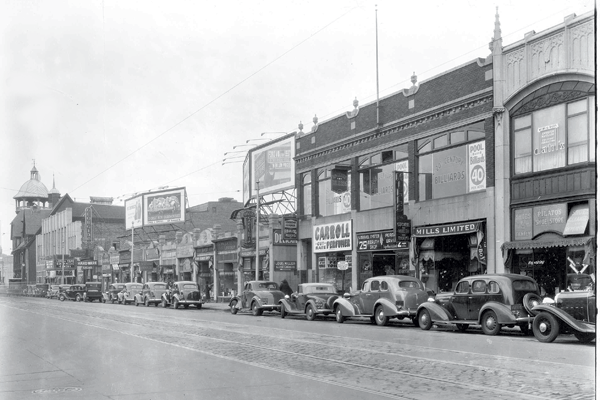 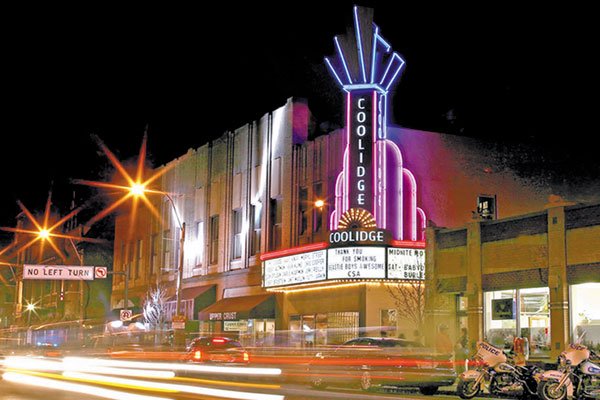 The Coolidge Corner Theater has had a long and checkered history. It took seventeen years for the community to finally allow for the building to be erected in 1933. The greatest resistance to building the theater came from the fear that it would lead to the “corruption of youth." The theater was initially granted to be a 1,500 seat entertainment center above an long standing Universalist Church. The first movie was screened in December of 1933. During the golden age of Hollywood stars such as Charlie Chaplin, Shirley Temple, Cary Grant, Katharine Hepburn, Ingrid Bergman, Errol Flynn, Humphrey Bogart, Marilyn Monroe, Marlon Brando, and James Dean had all been seen at the Coolidge at one point or another.
The 1970s brought financial issues for the Theater. Funding became more limited however the theater went through an art-deco inspired remodeling in hopes to reviving visitation. The art-deco remodeling was hoped to attract more guests, which it was successful in doing so.The change from the original 1930s building was well warranted and turned the theater from more of a broadway style to an arthouse inspired spot.
After Justin Freed took over as owner in the 2000s he has striven for the revivals of film classics from the past. The theater to this day has weekly midnight screenings that attract a cult-like following for classics such as Jaws, The Room, or Carrie, to name a few. He also increased the screening of foreign and independent cinema. Freed worked to introduce audiences audiences to movie making geniuses who are frequently overlooked such as Preston Sturges, Fred Astaire, and Buster Keaton. He still was faced with a difficult decision in 1988 when the theater was sold to a developer to be either demolished or turned into office space.  At this point, the local Boston film teacher David Kleiler stepped in to save the theater.  He led a grassroots movement known as "Friends of the Coolidge,” which eventually persuaded the Brookline Historical Commission to conclude that the theater was of historical significance for the development of the town of Brookline.
This is where a Boston local film teacher named David Kleiler, stepped in to save the Coolidge Corner theater in a grassroots movement. He created a group known as "friends of the Coolidge" where they managed to convince the Brookline Historical Commission that Coolidge Theater was of historical significance to the development of the town of Brookline.The group subsequently became a non-profit organization providing financial support for the theater. In January 1989 $2.6 million was raised to keep this monument alive and functioning. Additional support was provided by Harold Brown, a Brookline realtor who grew up with the theater, who reopened the Coolidge after a short closure due to lack of funding. Another Brookline realtor named Chobee Hoy works hard to keep the Coolidge Corner theater alive today. While the theater has faced considerable financial hardship,  the overwhelming support from the town itself has kept this monument functioning.