Constructed in 1959, Abbot Vincent Taylor Library is at the heart of Belmont Abbey College’s educational mission. Reflecting both the medieval traditions of Benedictine monasticism and digital innovations of the 21st century, the Library serves as a campus center for research, study, instruction, and academic support. The library was listed as a contributing property in the National Register of Historic Places as part the Belmont Abbey Historic District in 1993.

Entrance of the Abbot Vincent Taylor Library following renovations in 2015. 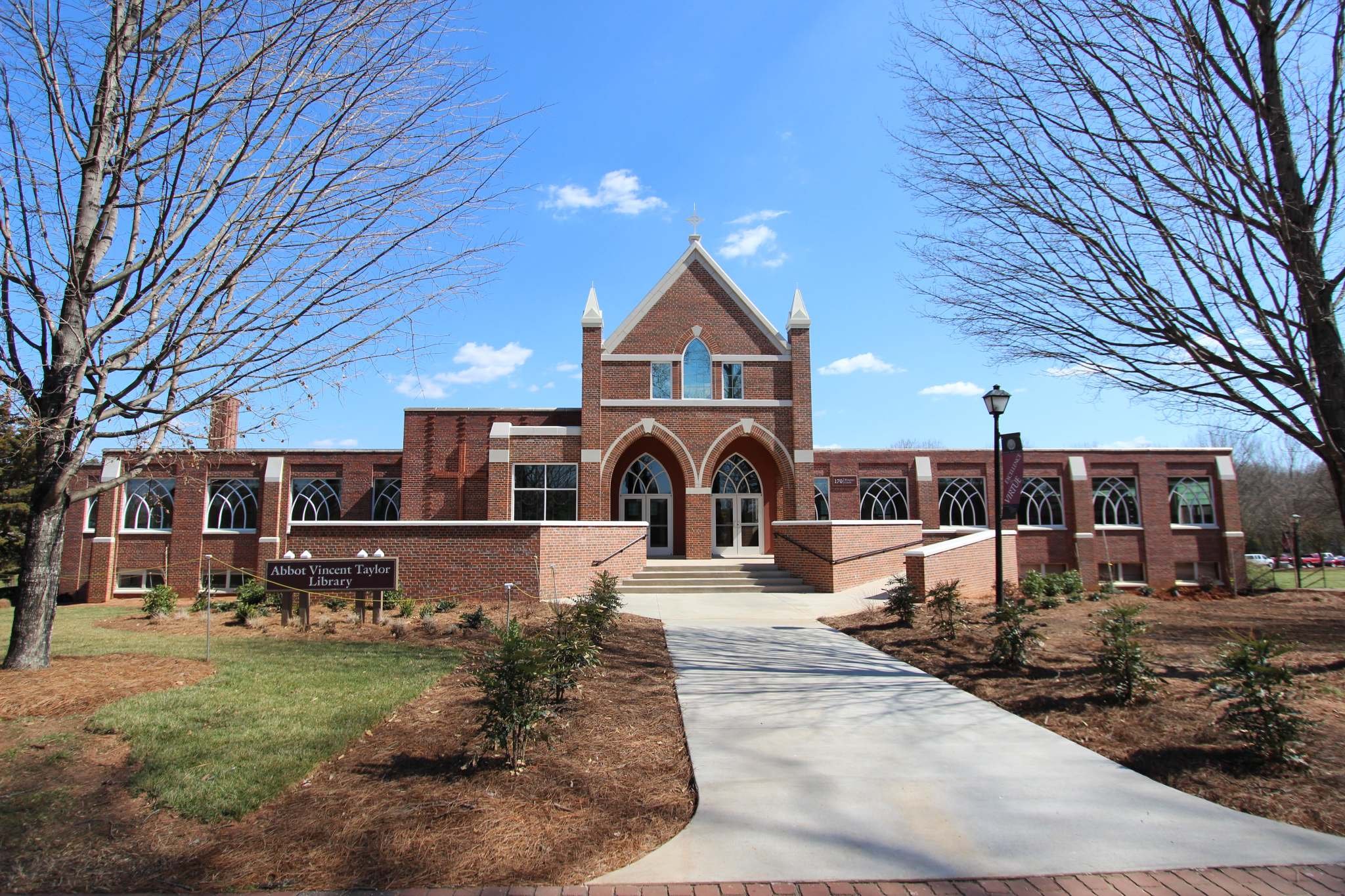 Abbot Vincent Taylor (1877-1959), second abbot of Belmont Abbey, president of the college, and the namesake of the library. Source: Baumstein, Blessings in the Years to Come (1997). 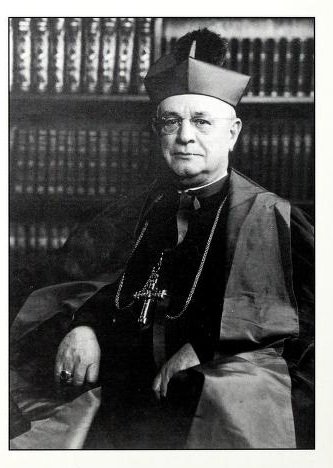 Fr. Thomas Oestereich, one of the monks of Belmont Abbey responsible for assembling a new book collection following the library's destruction in a campus fire in 1900. Source: Baumstein, Blessings in the Years to Come (1997) 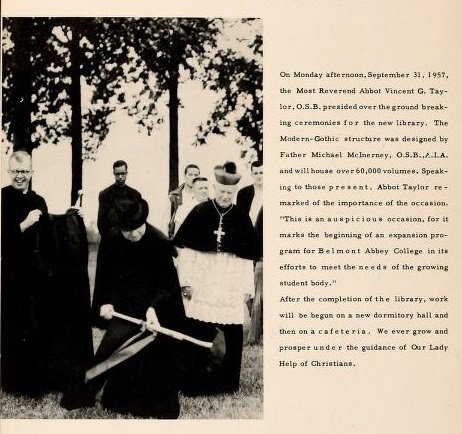 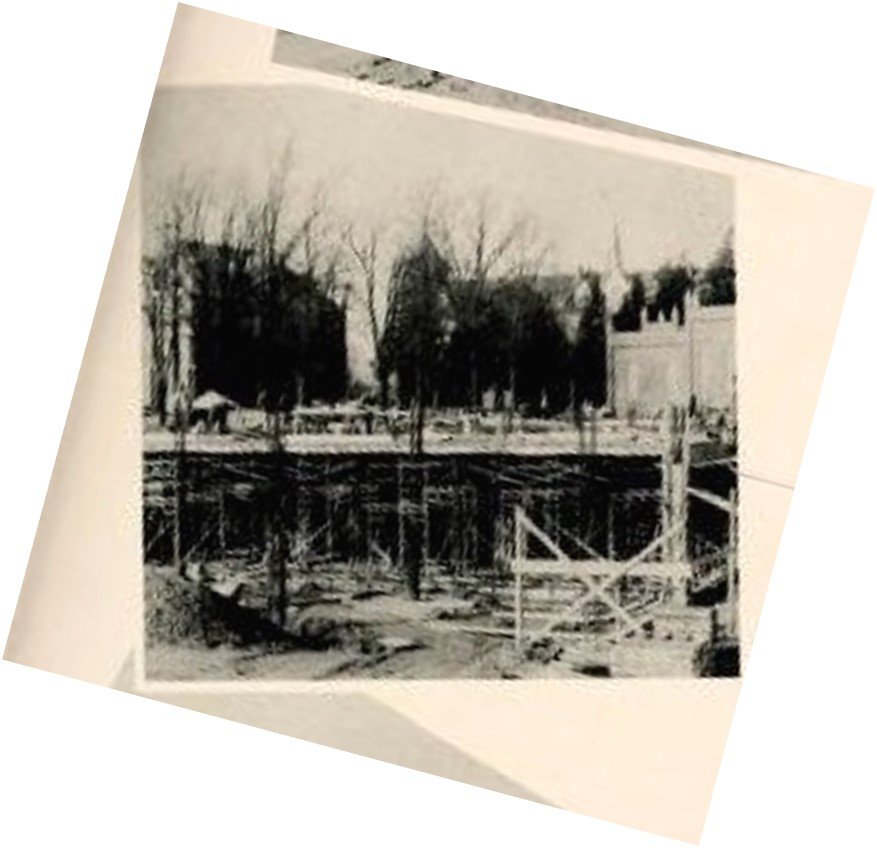 The Abbot Vincent Taylor Library along Abbey Lane and near other campus structures. Source: The Spire Yearbook, 1969. 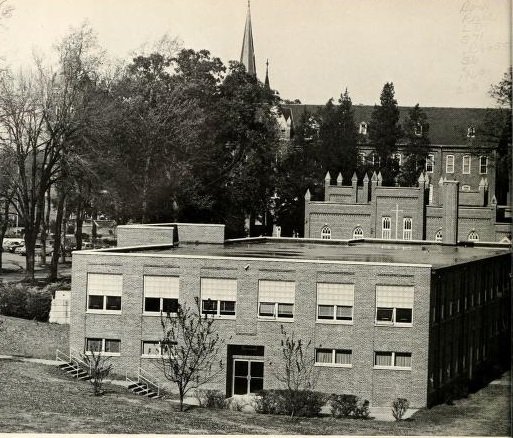 Fr. Michael McInerney receiving a honorary doctorate from St. Vincent's College following the construction of the Library, recognizing his architectural contributions to over 200 buildings and structures. Source: The Spire Yearbook, 1959. 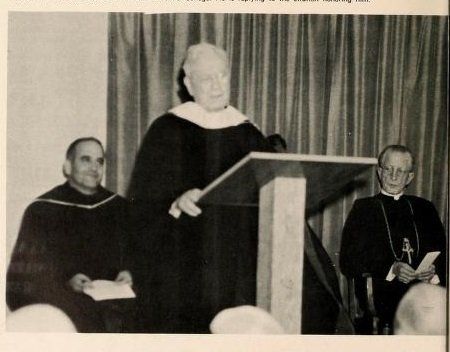 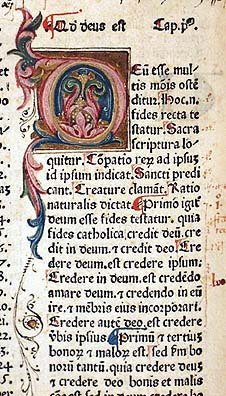 The Benedictine Room, the home of the special Benedictine Collection dedicated to the mission and history of the monastic order. Source: Baumstein, Blessings in the Years to Come (1997) 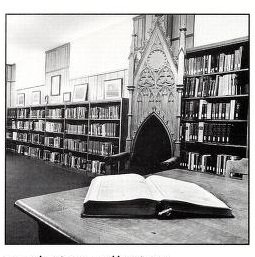 Belmont Abbey has supported a campus library since 1886, with the original repository located on the ground floor of the main college building, Robert Lee Stowe Hall. The initial collection consisted of 300 books secured by Abbot Leo Haid, the founding abbot of the monastic community. Tragically, much of this original collection was lost during a fire in 1900 that gutted the main college building.1 Sustained efforts to rebuild the library resulted in a remarkable new collection, thanks in part to Belmont Abbey monk Fr. Thomas Oestereich. Dispatched to Europe by Abbot Haid after World War I, Oestereich acquired a substantial collection drawn from libraries damaged or disrupted by the aftermath of the conflict.2  The location of the campus library shifted to other campus buildings in the subsequent decades. The college’s expansion following World War II demanded the creation of a dedicated structure to house the college’s growing collections.

The library building was designed by Fr. Michael McInerney (1877-1963), a monk of Belmont Abbey and noted architect. McInerney oversaw the construction of over 200 churches, monasteries, convents, and hospitals, including much of the infrastructure of the college campus. The library would be his final architectural achievement. In the entry for the library in the National Register of Historic Places, the library “displays [McInerney’s] adaptation of modernist design influences in the last stages of his career.”3

The library is dedicated to Abbot Vincent Taylor (1877-1959), the second abbot of Belmont Abbey and successor of Abbot Leo Haid. Taylor is credited with leading the college through a period of expansion and development, resulting in the establishment of the modern college as it operates today.

The library’s holdings have vastly increased since the college’s founding. Today the Abbot Vincent Taylor Library houses approximately 125,000 print titles, provides links to  to databases offering 350,000 full text e-books and 25,000 digital journals, plus microfilms, streaming video, DVD’s, and digital archival collections.. Particularly noteworthy are the Library’s special collections. The 13,000 works held in the Rare Books Collections date from as far back as the 15th century. Among the most noted of these titles is a work of the noted medieval theologian Albertus Magnus, the Compendium Theologicae Veritatus (1474).4 Other notable collections include the Fr. Abram J. Ryan Archive, featuring letters and manuscripts of the noted Civil War poet5, and the Benedictine Collection, dedicated to the fifteen centuries of the monastic order’s history and ministry.6  In addition to the Library’s collections, significant space is set aside for a Learning Commons, computer stations, study carrels, and academic and research support resources.

The Abbot Vincent Taylor Library was listed in the National Register of Historic Places as a part of the Belmont Abbey Historic District in 1993. In 2015, a $1.5 million renovation of the Library enhanced the Library's entrance and accessibility.