Built in response to the 1916 steel worker strike and riot that destroyed much of East Youngstown (now Campbell), the Blackburn Plat was a subdivision of Youngstown Sheet and Tube company housing for immigrant and African American steelworkers. 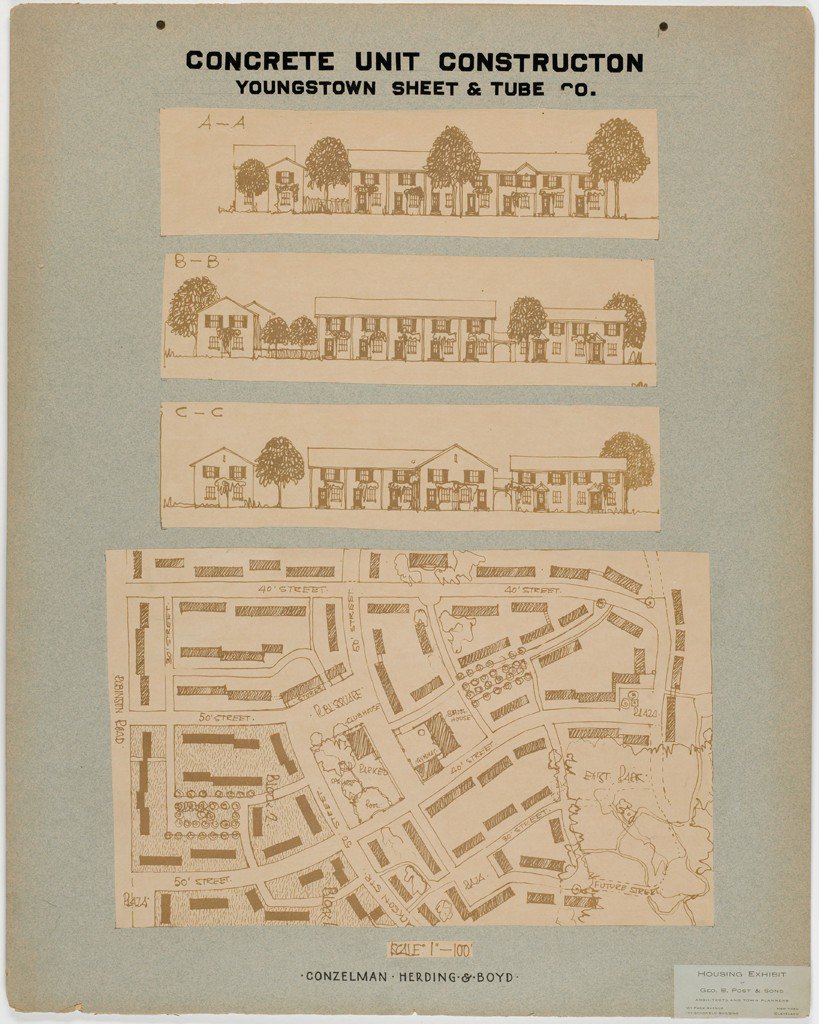 The Blackburn Plat can be seen in the top right corner in this section of a c. 1919 map showing the various housing developments of the Buckeye Land Company in relation to the Youngstown Sheet and Tube Company campus. (Source: Ohio Memory) 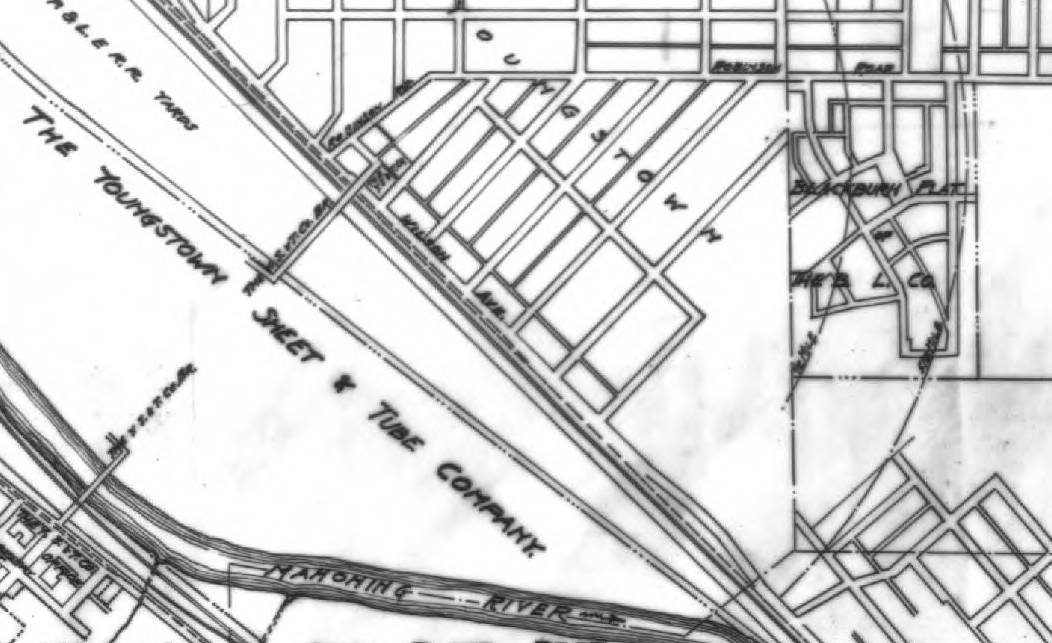 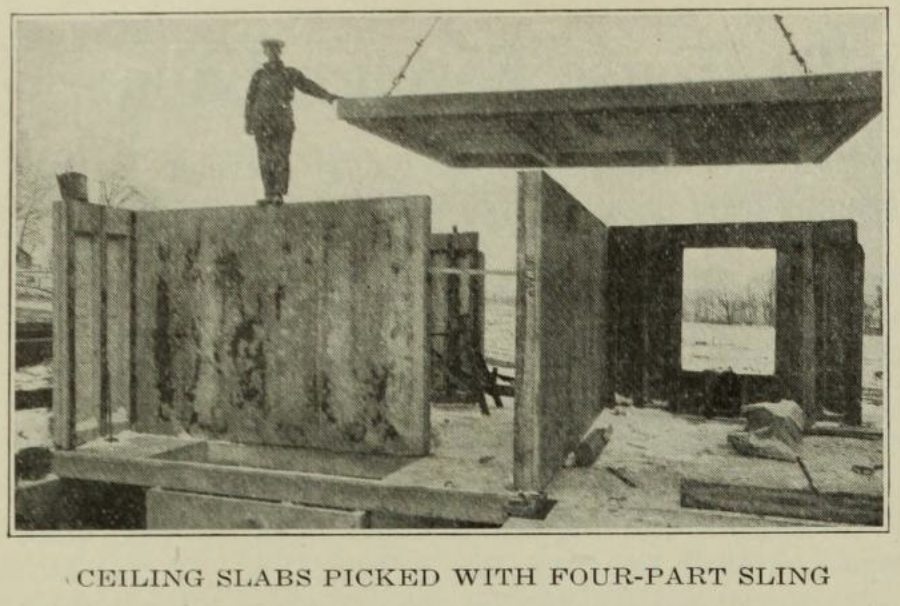 An advertisement for Blackburn Plat (Campbell) housing specifies the housing was for white employees. The section for African American steelworkers was "naturally segregated" with a separate entrance. (Source: Urban Ohio) 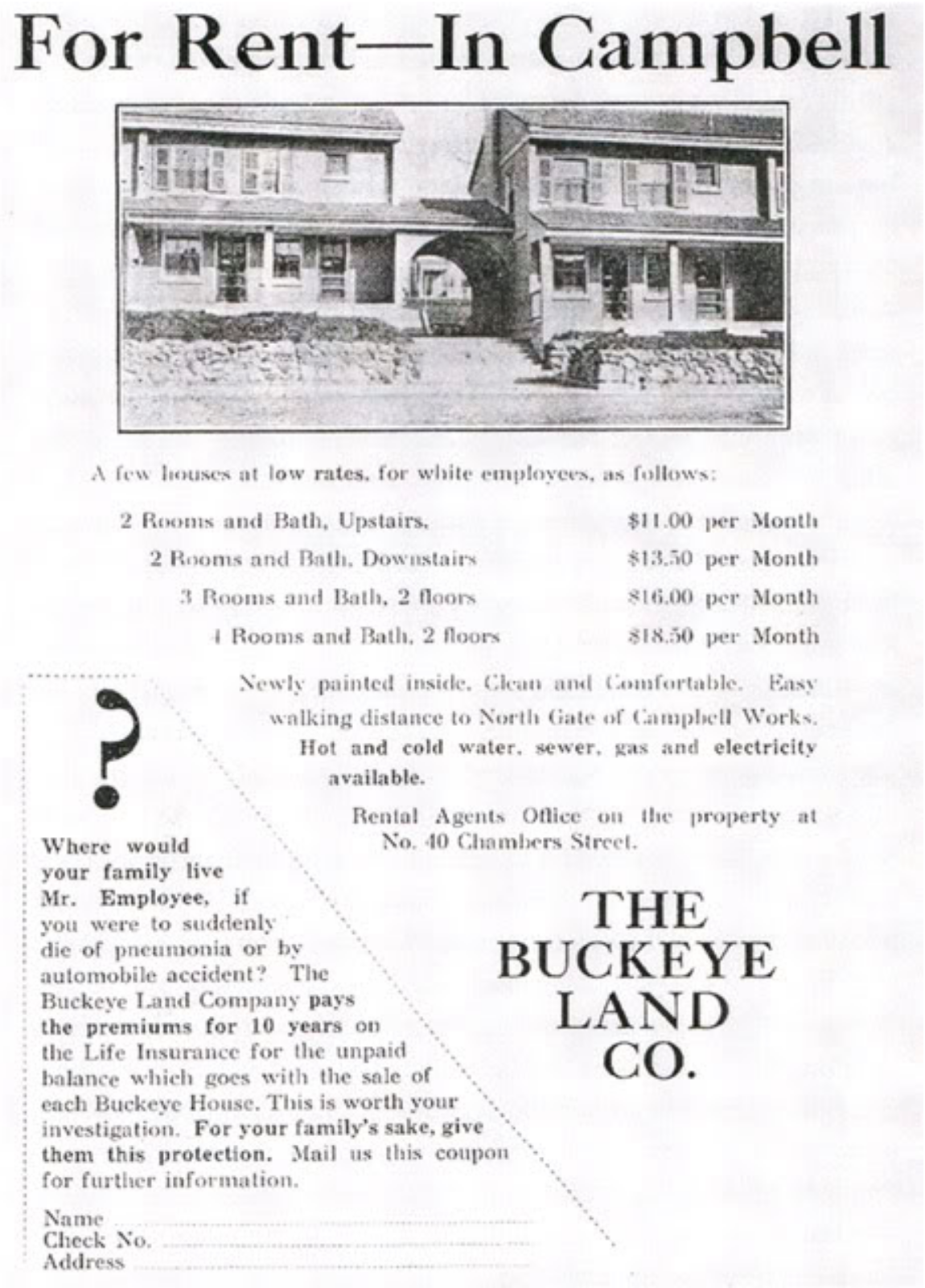 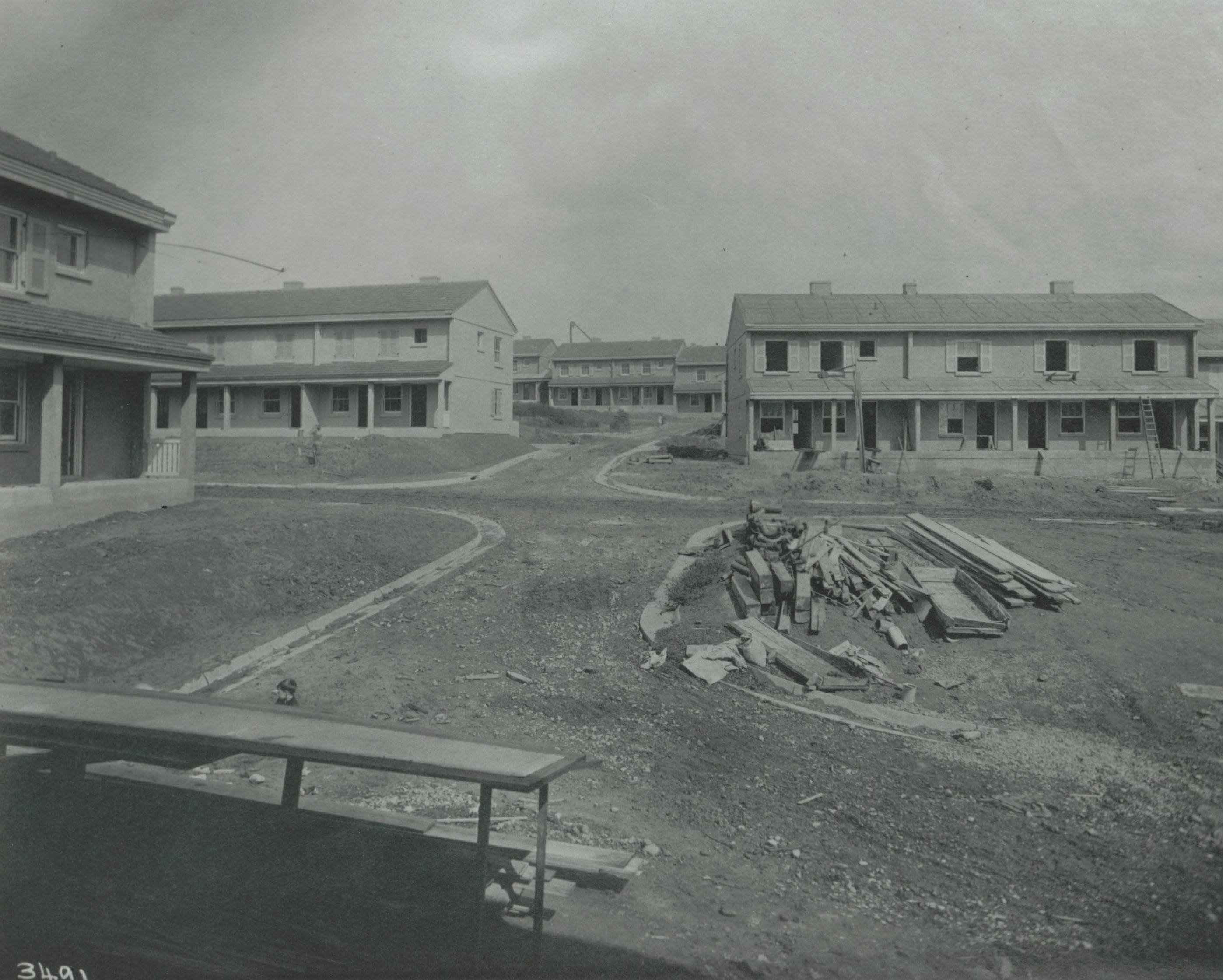 Housing in the Blackburn Plat was created for "foreign-born" and African American workers. (Source: Ohio Memory) 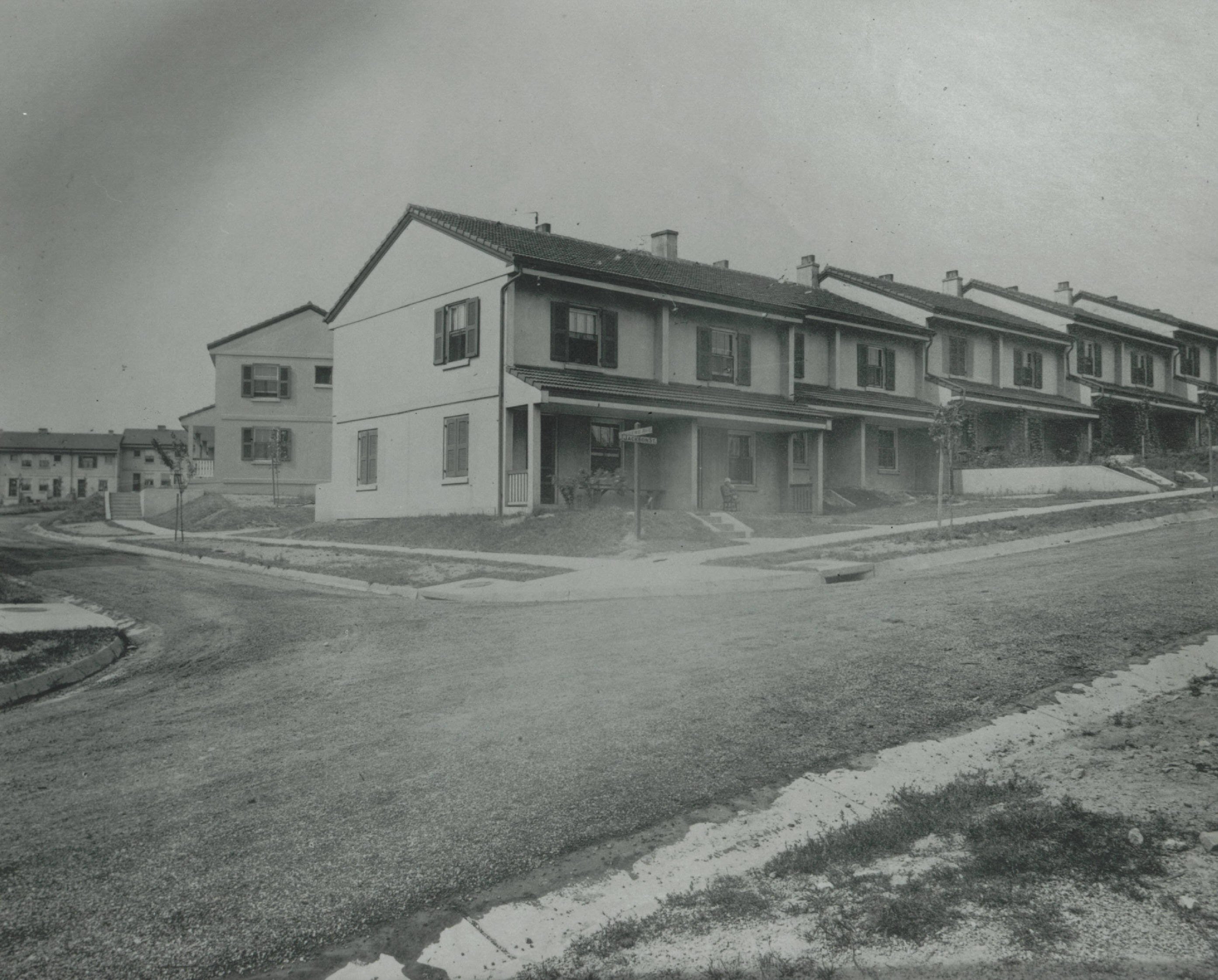 Finished units in the Blackburn Plat similar to those featured in the advertisement. (Source: Ohio Memory) 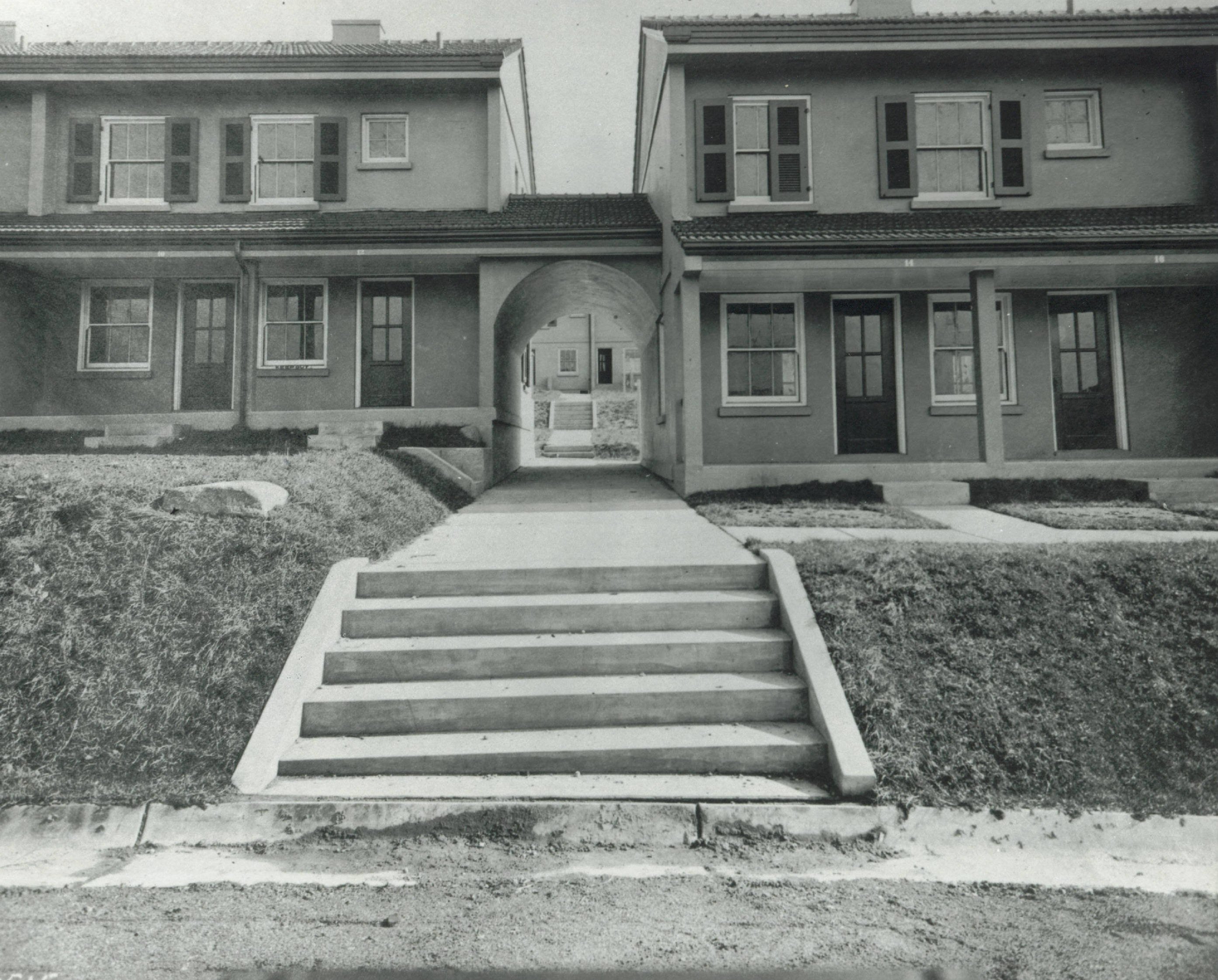 In the decades after "Black Monday," many houses in the Blackburn Plat was abandoned and vandalized. (Source: Kaeleigh Herstad/Rustbelt Anthro) 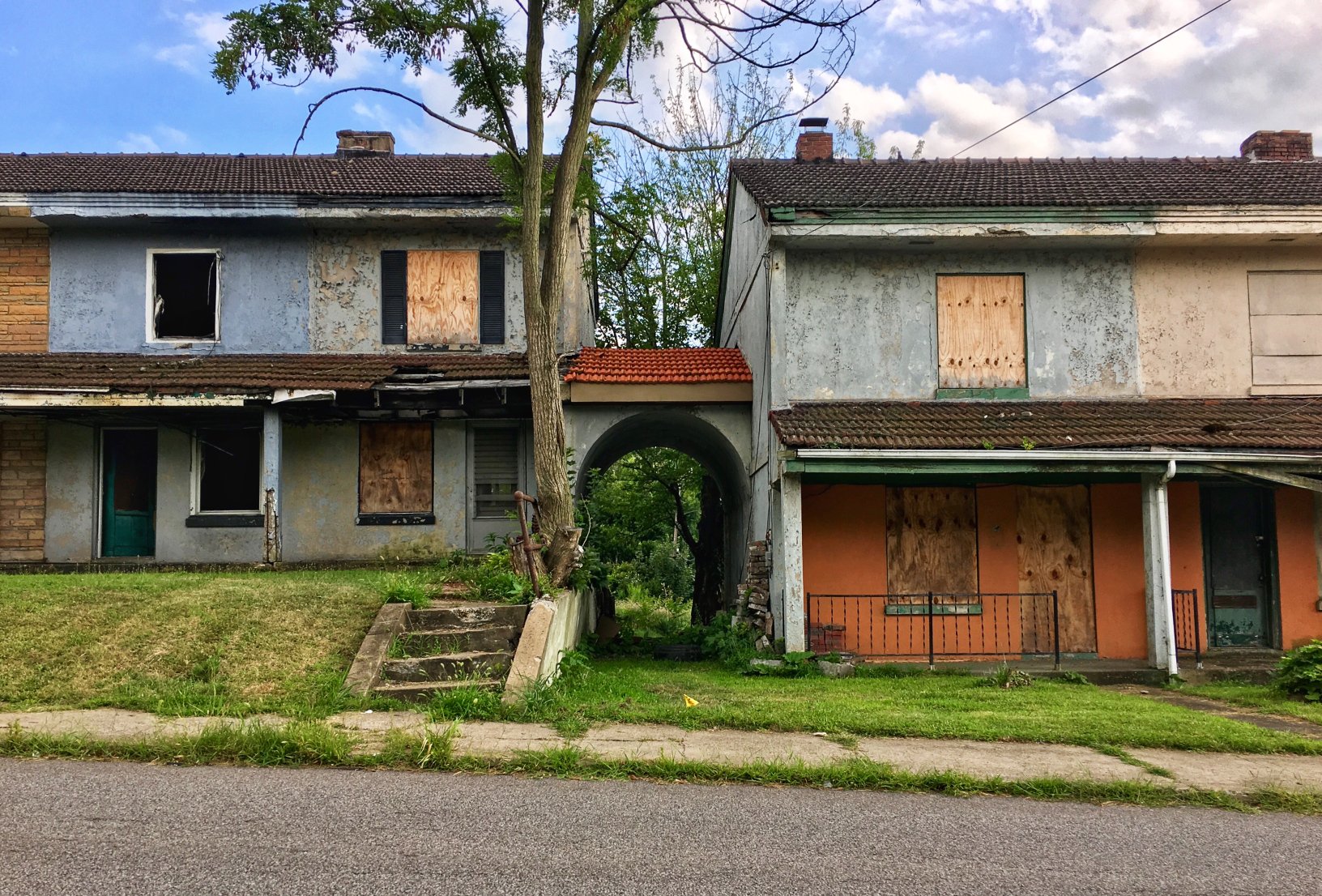 The National Historic Site marker notes the Blackburn Plat was the "first pre-fab concrete estate in the world." The site was put on the Endangered list in 2011. (Source: Kaeleigh Herstad/Rustbelt Anthro) 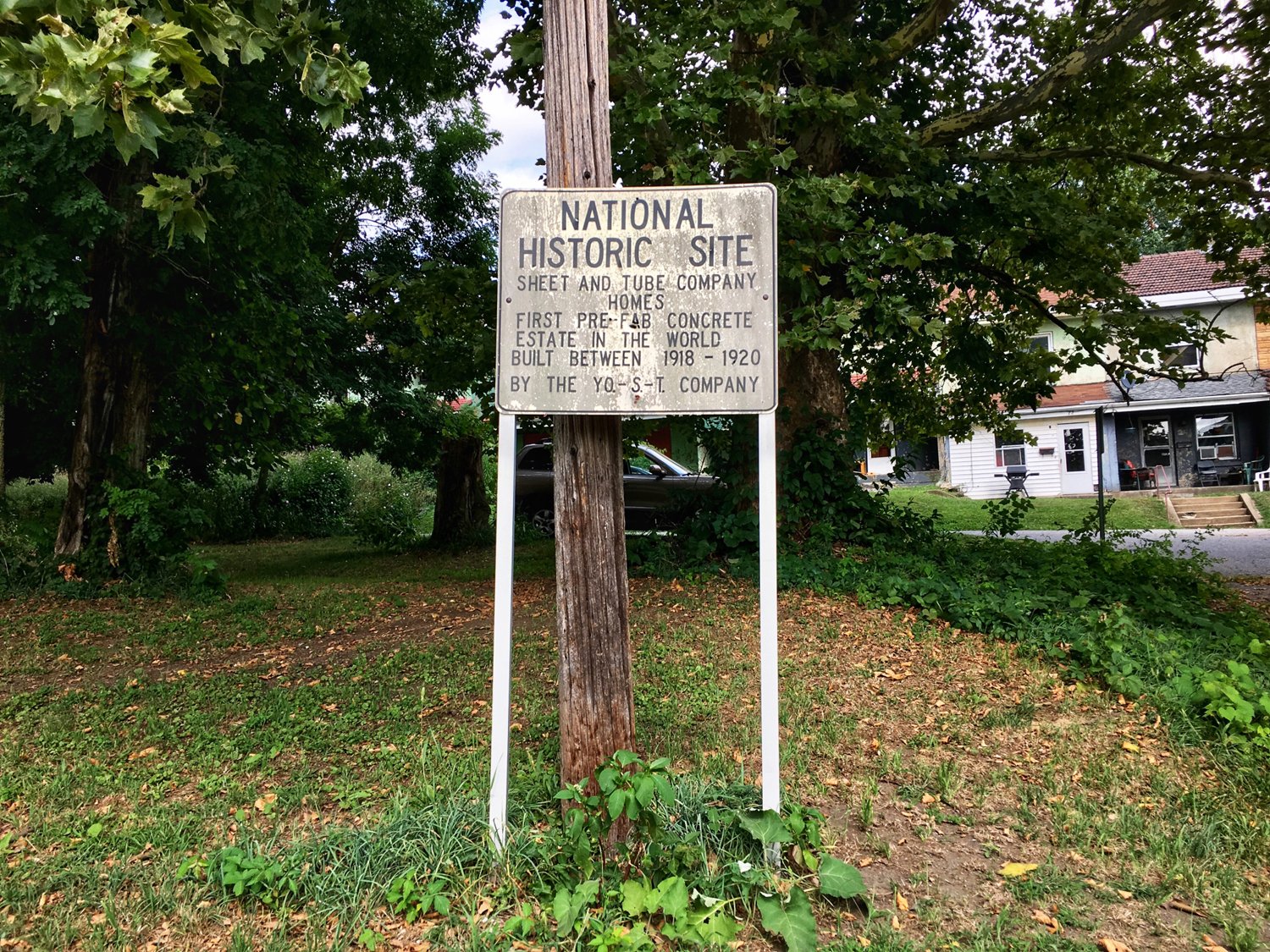 In 1916, labor disputes with Youngstown Sheet and Tube (YS&T) Company prompted a steel strike at its flagship East Youngstown (now Campell) plant. Shots were fired at the striking steelworkers on January 7, 1916, which led to riots, arson, and looting. In response to the strike, YS&T increased wages and implemented “welfare capitalism” to instill company loyalty and deter unionization. A housing subdivision for immigrant and African American workers was proposed as part of this program, and the Buckeye Land Company was established as a subsidiary in 1918 to build houses and apartments within walking distance of YS&T’s Campbell Works.
The Blackburn Plat was built with an initial investment of $250,000 and consisted of row houses built of reinforced concrete, an early example of using concrete as a building material for a large-scale residential project. In its April 11, 1918 issue, Engineering News-Record featured an article about the creation of the YS&T housing, noting “precast slabs, poured in a yard and erected by a traveler, are being used for the first time in this country to construct dwelling houses” (695). This settlement was one of the first attempts to provide permanent and affordable housing that was also comfortable, sanitary, and fireproof.
Designed by Conzelman, Herding and Boyd, a St. Louis architecture and engineering firm, the first phase of construction included 146 one-, two-, and three-family units combined in rows. Each unit could be rented for under $20 a month and had electricity, indoor plumbing with laundry and a shower in the basement, and a small garden in the back. The units were designed small to discourage the common practice of taking in boarders. The neighborhood featured a “community house,” gymnasium, and school with a public square as the focal point.Through the Blackburn Plat and company housing, YS&T was able to provide for the intellectual, spiritual, social, and material needs of its workers, binding them closely to the company and creating a dependency that went beyond employment.
The housing development addressed Youngstown Sheet and Tube’s ideological goals in addition to the workers’ practical needs by isolating the immigrant population from other groups of workers, controlling their living situations by becoming their landlords, and breaking up workers into individual family units. YS&T organized “Americanization” classes for immigrant workers during this time, and The American Architect noted in its October 2, 1918 issue that the Blackburn Plat was expected to develop “American family ideals and standards of living” among the immigrant workers (383). The section for African American workers was “naturally segregated” with a separate entrance and central square, and the homes’ front porches were moved to the rear to reduce visibility of residents from the street and to make this section feel more contained.
Youngstown Sheet and Tube sold the houses in the 1940s, and on September 19, 1977, known as “Black Monday,” the company abruptly closed the Campbell Works and began massive layoffs. The homes were declared a National Historic Site in 1982, but many were abandoned and vandalized in the following decades and the development was put on the Endangered list in 2011. Since 2013, the nonprofit Iron Soup Historical Preservation Company has been purchasing and rehabilitating buildings in the Blackburn Plat as affordable housing for veterans and others. Iron Soup also renovated and now maintains one unit as the Company House Museum to show visitors what a home would have looked like in 1918.