History Museum on the Square

The History Museum on the Square is dedicated to preserving and promoting the history of Springfield and Greene County. This regional history museum is an expanded educational destination for Springfield and its visitors. Located on historic Park Central Square and the original Route 66 in Springfield, the buildings housing the museum have been restored to preserve and share the rich history of the city. The History Museum was voted USA Today's Best New Attraction 2019!

Step inside the front doors and find yourself immersed in history. From a touchscreen table featuring Springfield "then and now" to gallery introductory videos, the Welcome Center provides interactive experiences as you begin your visit. In the Welcome Center you can also find stamps for the Missouri Civil War Passport and the National Park Service Trail of Tears Passport.

The History Museum on the Square features six main galleries highlighting the rich history of Springfield using innovative technologies and traditional approaches to engage visitors. These permanent galleries tell the stories of significant events in Springfield and create distinct and intentional dialogues about objects, individuals, and history– dialogues that will foster examinations of unique aspects of Springfield, Greene County and its people. A rich and vast collection of artifacts, photographs, and the “voices of history” are combined using innovative technologies. The galleries explore topics of Native Americans in Southwest Missouri, founders and pioneers, the Civil War in Springfield, Wild Bill Hickok and his infamous shoot-out on the Square, transportation history, and Route 66. Voices of History is the temporary gallery space that has rotating exhibits and traveling exhibitions on display throughout the year.

The History Museum on the Square welcomes visitors of all ages with hands-on interactions in the galleries, games to play, short films to watch, and artifacts and photographs to explore. 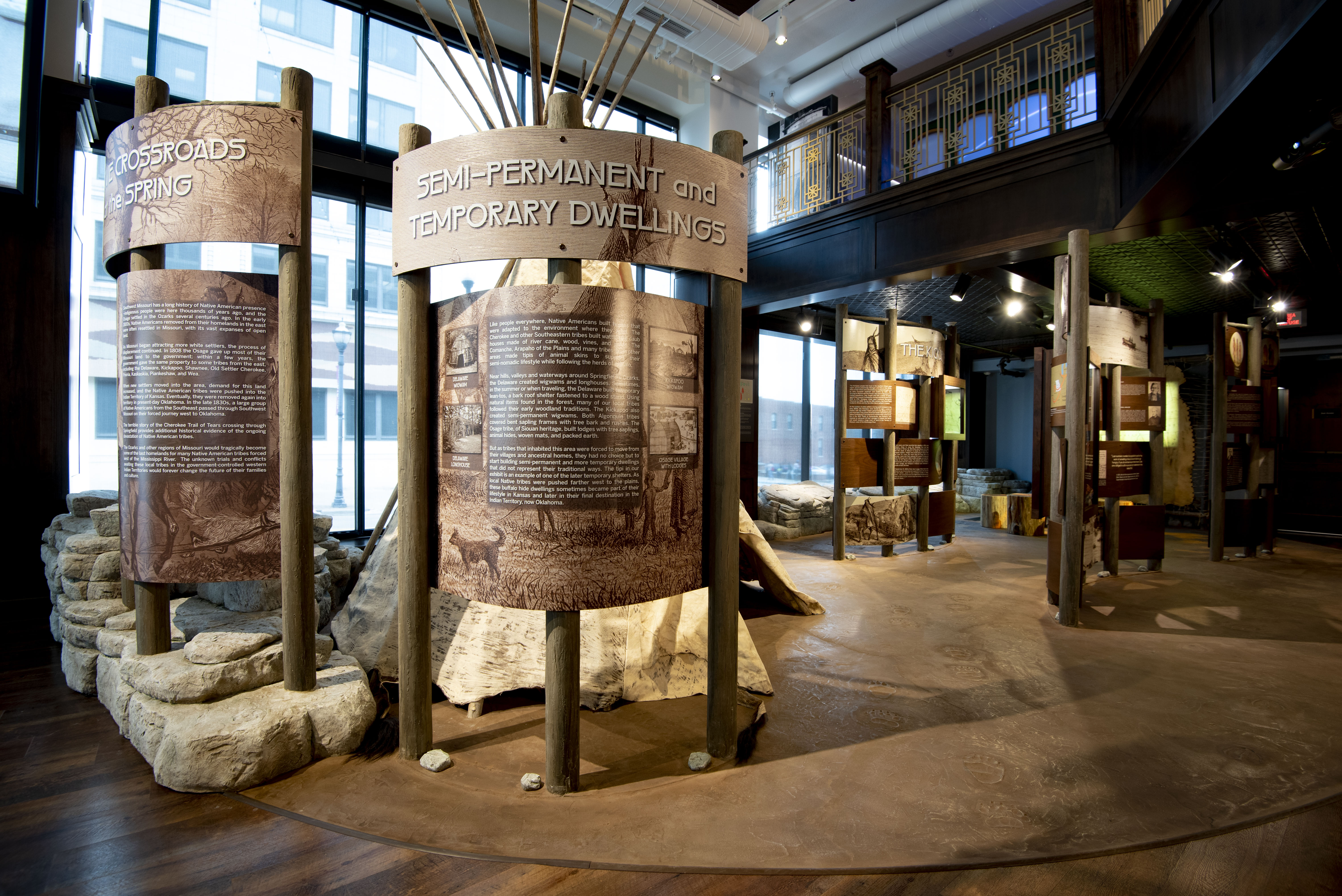 Native Crossroads at the Spring Gallery

The first main exhibit at the History Museum on the Square discusses the Native Americans who lived in the area from about the 1600s through the 1800s. The Osage was the most dominant tribe in the area covering the majority of Missouri, northern Arkansas, and parts of Kansas and Oklahoma. The Delaware, Kickapoo, Shawnee, and others were moved into the area in the 1810s as they were relocated by the government from the East. The land that later became Springfield was a temporary home for these tribes. 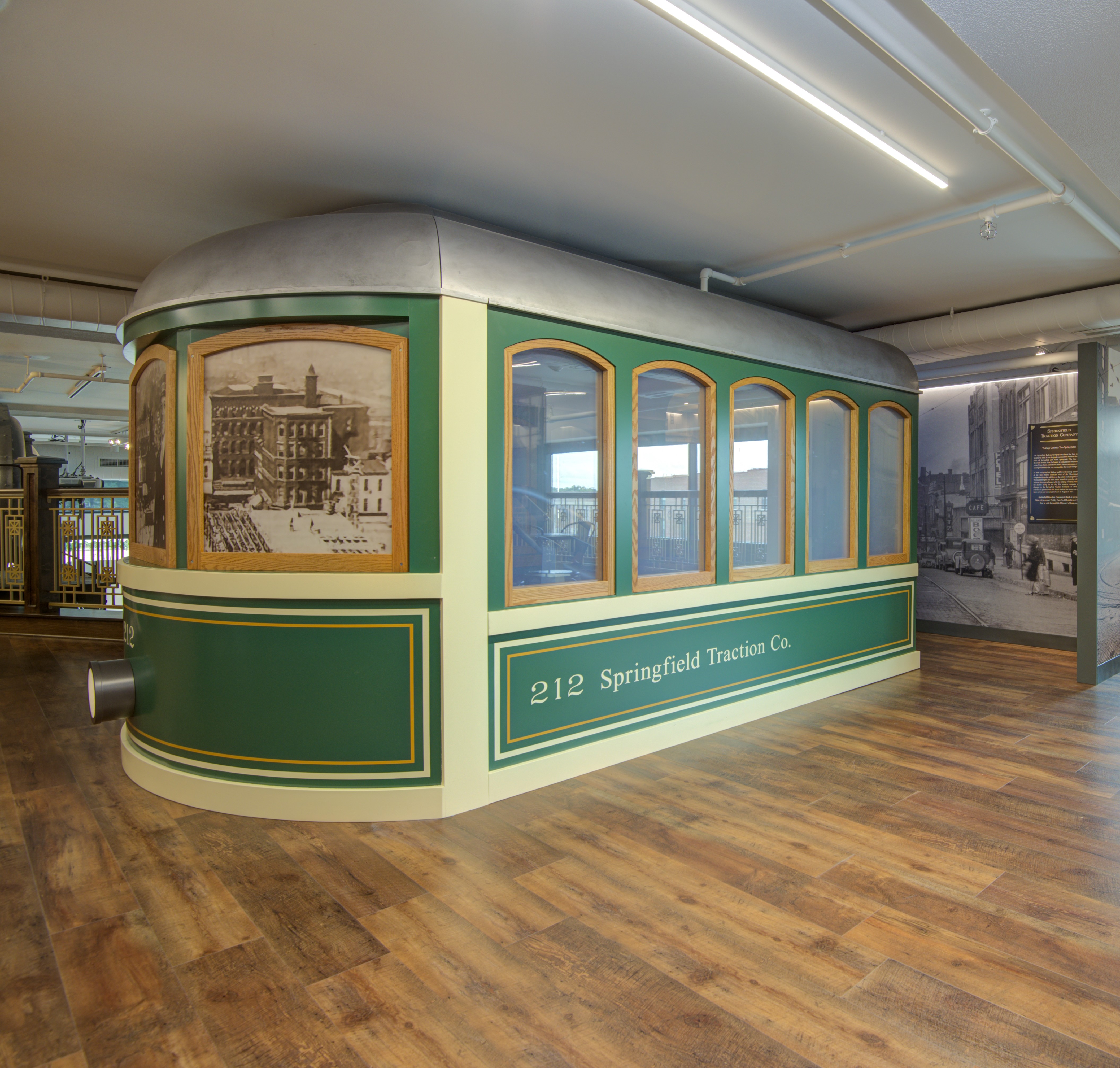 The transportation exhibition is the most interactive and immersive exhibition. You can climb aboard train which shows a rolling landscape and looks like it is in motion, check out the broiler and control the speed of the train. You can also play games about transportation, avoiding obstacles and learning what it was like to travel by wagon, train and automobile. Inside the Time Traveling Trolley, you can explore stories from throughout Springfield's history. Starting from the earliest known Europeans documenting the Ozarks to the creation of North Springfield to the Ozark Jubilee to Bob Barker and other famous Springfieldians, you get a deep look at fun and interesting stories from Springfield's past. There are over forty short video clips to enjoy. 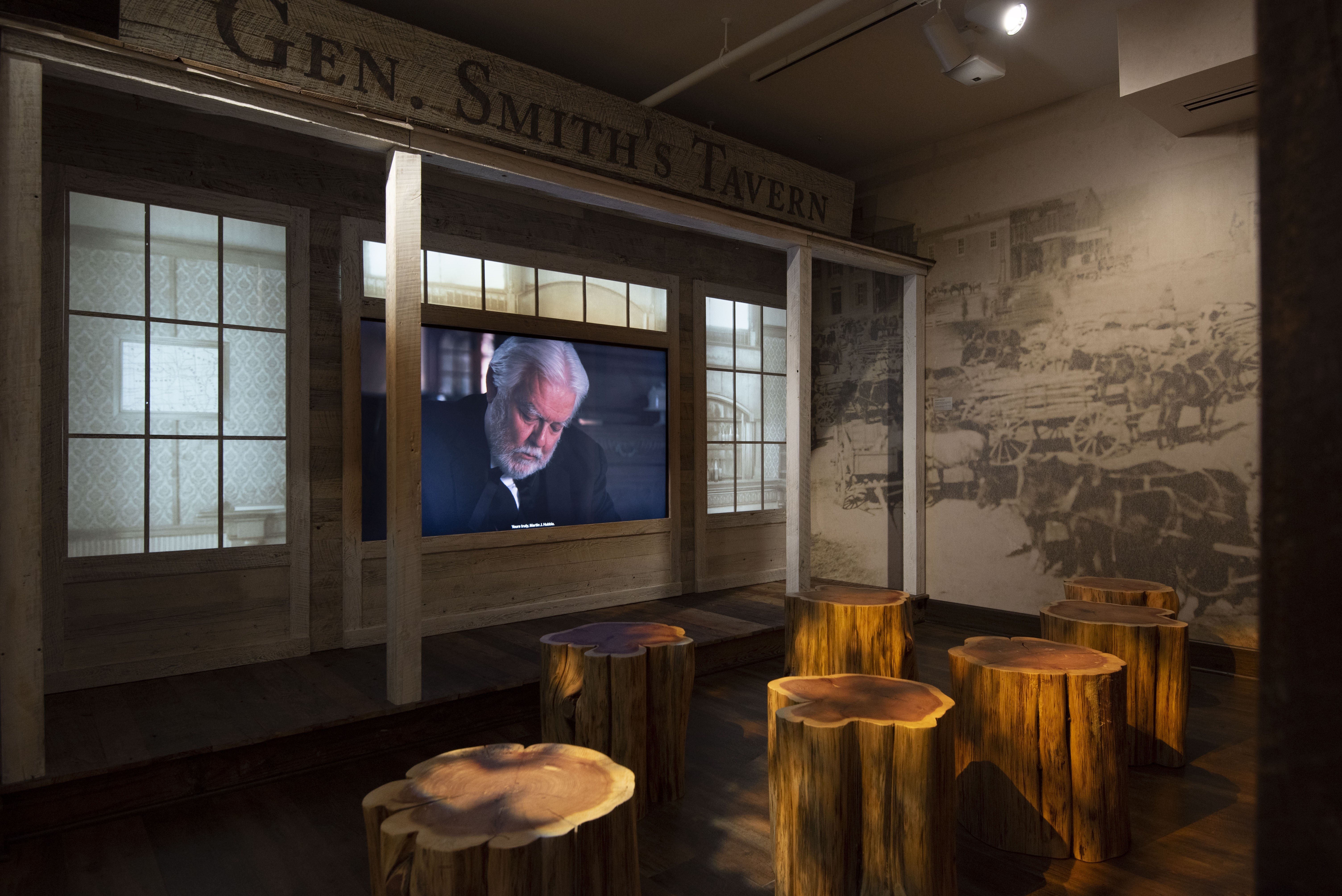 Pioneers and Founders at the Crossroads Gallery

The French were the first Europeans to explore this area. They were also the first to be in contact with the Osage. In 1818, Henry Schoolcraft and Levi Pettibone explored the territory west of the Mississippi River and came into the area now known as Greene County. In 1828, John Polk Campbell came to the area with his brother-in-law following Native American trails that crossed through the area. Originally from Tennessee, the two were looking for opportunity and to expand their families’ landholding. Campbell found good land near a large spring and marked a tree with his initials to claim the land while he journeyed back to Tennessee to move his family out. 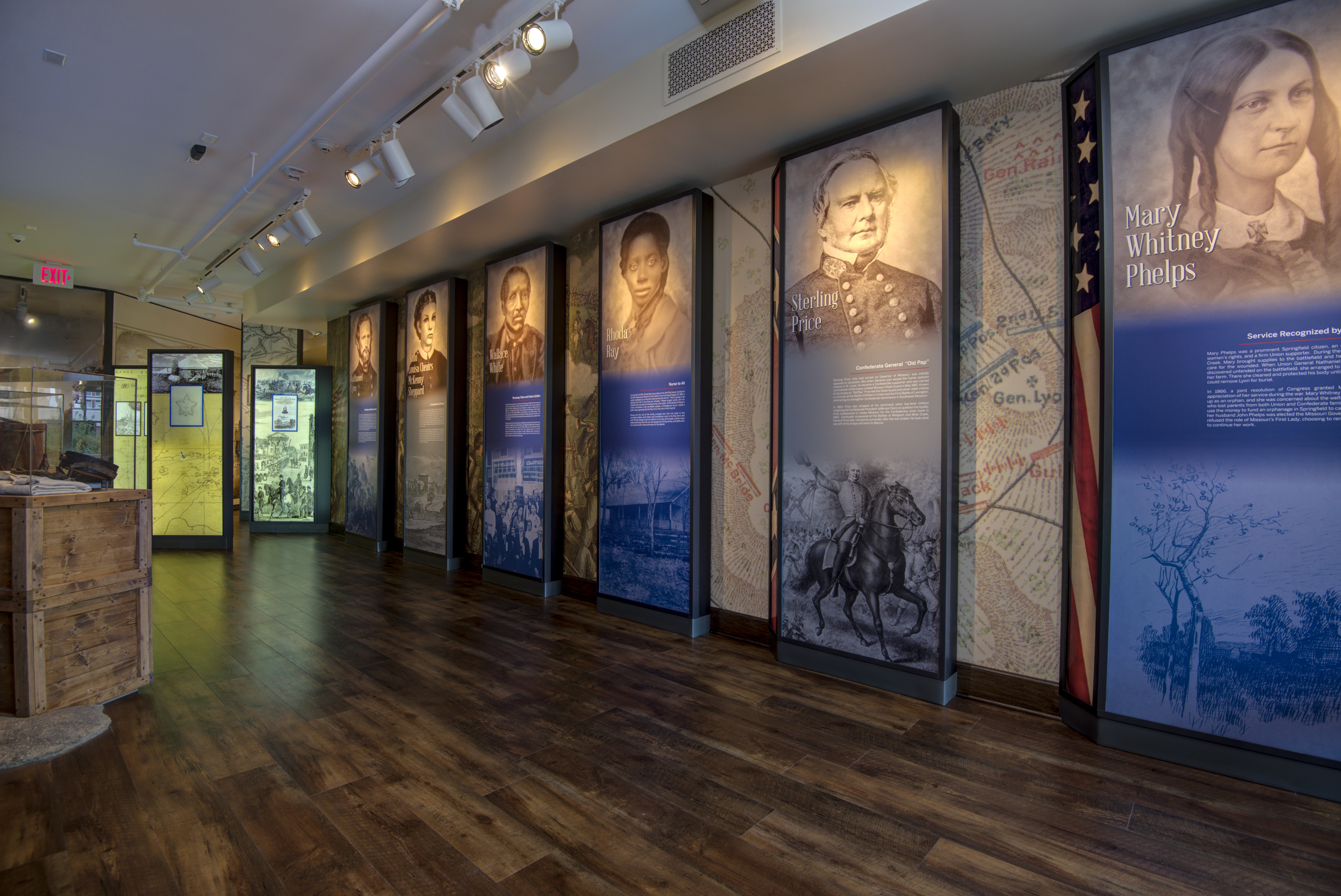 Before the Civil War began, Missouri was in a state of turmoil over the topic of slavery in Missouri and surrounding states. Originally a slave state due to the Missouri Compromise of 1820, in 1854 the Kansas-Nebraska Act changed the ruling to let the citizens of each state decide their state’s slavery status. The movement, along with other factors, left a very tense political and economic climate. When the Civil War broke out on April 12th, 1861, Lincoln called for 75,000 Federal Troops to put down the skirmish, but the Missouri Governor, Claiborne F. Jackson, refused to send troops though the state stayed in the Union. Missouri was a greatly sought after state for the Union as well as for the Confederacy due to its central location, access to the railroad in Rolla and abundant natural resources. By the end of the war, Missouri ranked as the third most fought over state in the country, right behind Virginia and Tennessee. During the war, three battles happened in and around Springfield. 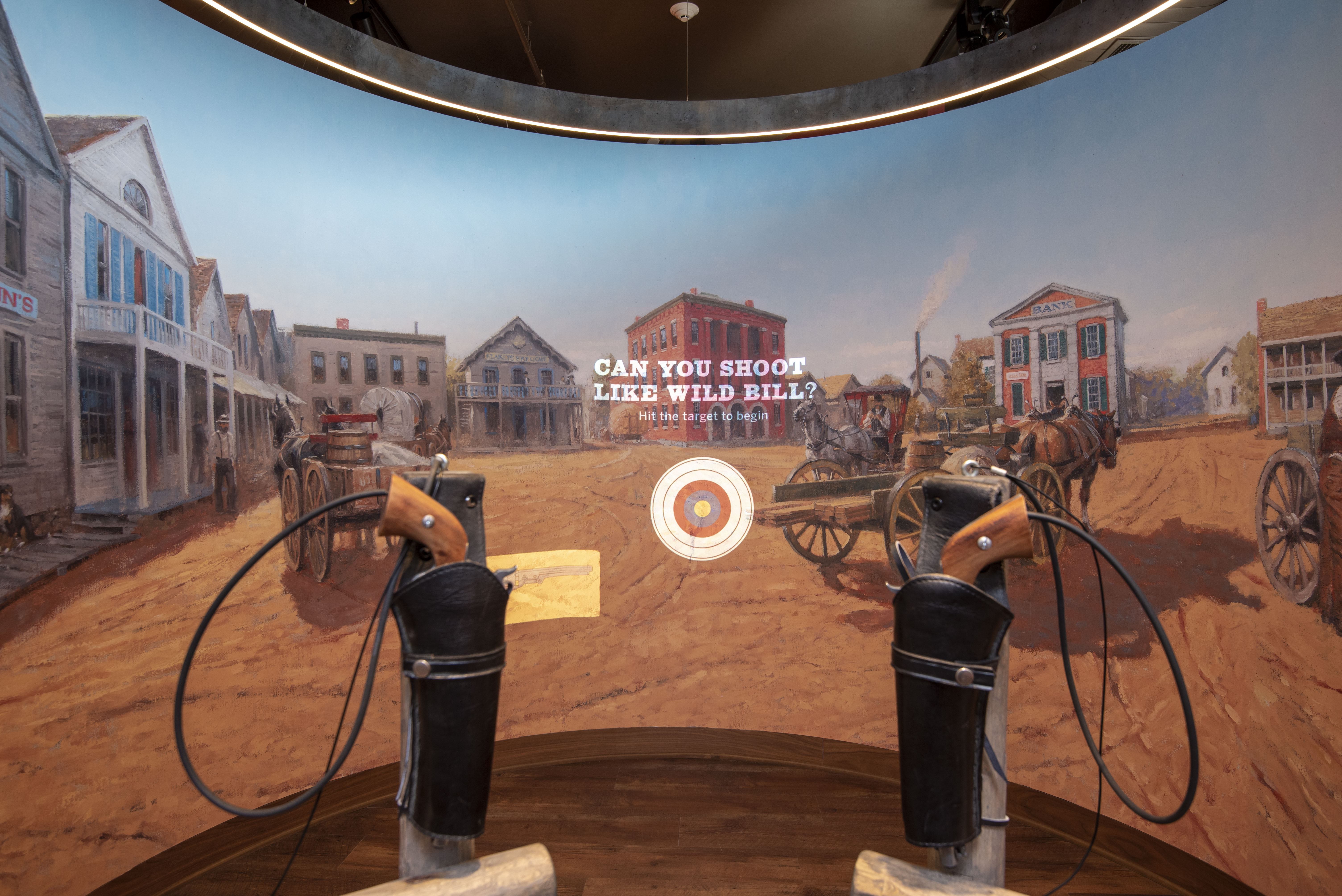 The legendary Wild Bill Hickok was a gunfighter, scout, lawman, and gambler. He is known in Springfield for his infamous shoot-out on the public square, which is believed to be the first recorded "wild west" style shoot-out. Wild West shoot-outs are classified as informal and personal encounters as opposed to gentlemanly duels. Hickok came to the Springfield area during the Civil War. After the Civil War, he worked as a lawman in Springfield; although, Hickok was also very well known for his gambling and hot temper. One man that Hickok came into contact with was Davis K. Tutt, who ended up at odds with Hickok in July of 1865.

With the increased accessibility of automobiles in the early 1900s, more and more people were owning and driving cars. Quickly, it was discovered that roads were in desperate need of improvement across the country. The Federal Government started making an effort to support the creation of highways and good roads. A committee was formed to devise a standardized highway system that would be used across the country. This committee was the start of the interstate highway system and the birth of Route 66.

This driving tour begins at Wilsons Creek National Battlefield and takes visitors to each of the museums in Springfield. Highlights of the tour include the Calaboose Museum, the Springfield Museum of Art, the Route 66 Car Museum, and the History Museum on the Square. Be sure to also consider the Nathan Boone State Historic Site which is a short drive and located just northwest of Springfield.