The Bachmann Publick House was built by Jacob and Katrina Bachmann in 1753 and is Easton’s oldest standing building. Its second floor served as Northampton County’s first courtroom from 1753-1764 while the rest of the building served as a tavern. This community center hosted Native American council meetings during the French and Indian War as well as local strategy meetings during the American Revolution. It served as a tavern into the 1970s, was acquired by the Northampton County Historical and Genealogical Society and restored to its 18th century appearance in 2000. It now hosts various special events, colonial re-enactments and is home to a local colonial dinner theater company. It has been listed on the National Register of Historic Places since 1980.

The Bachmann Publcik House as seen from North 2nd Street. 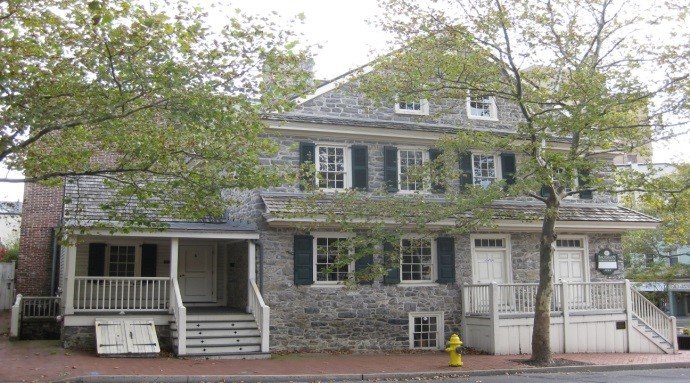 The Easton town crier on the steps of the Bachmann Publick House. 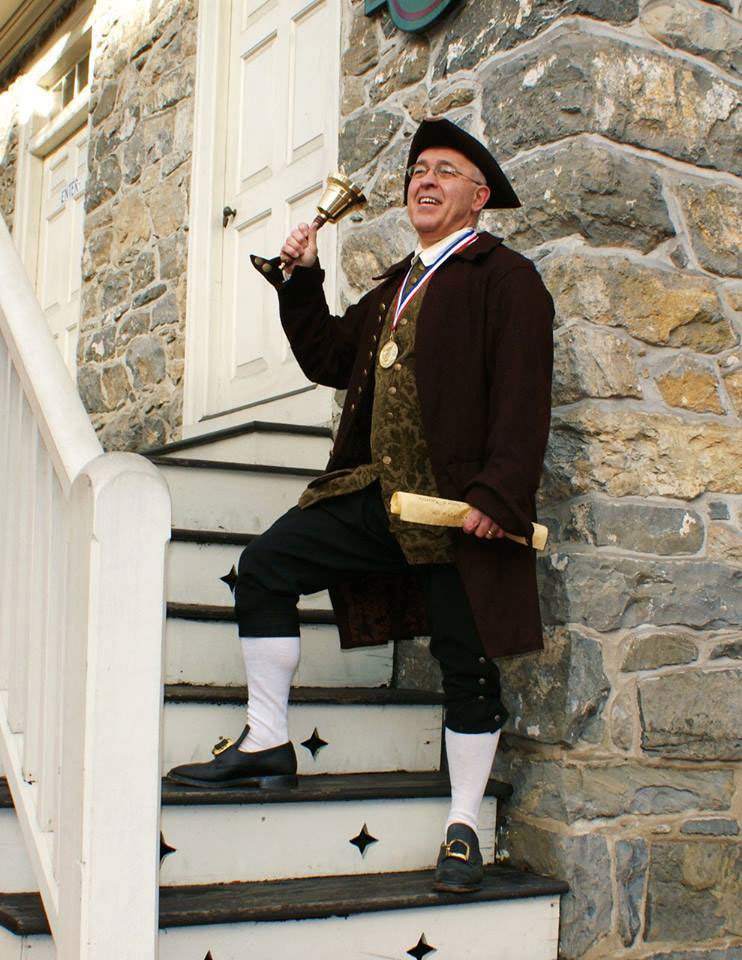 A small table placed in front of one of five fireplaces within the Bachmann House. 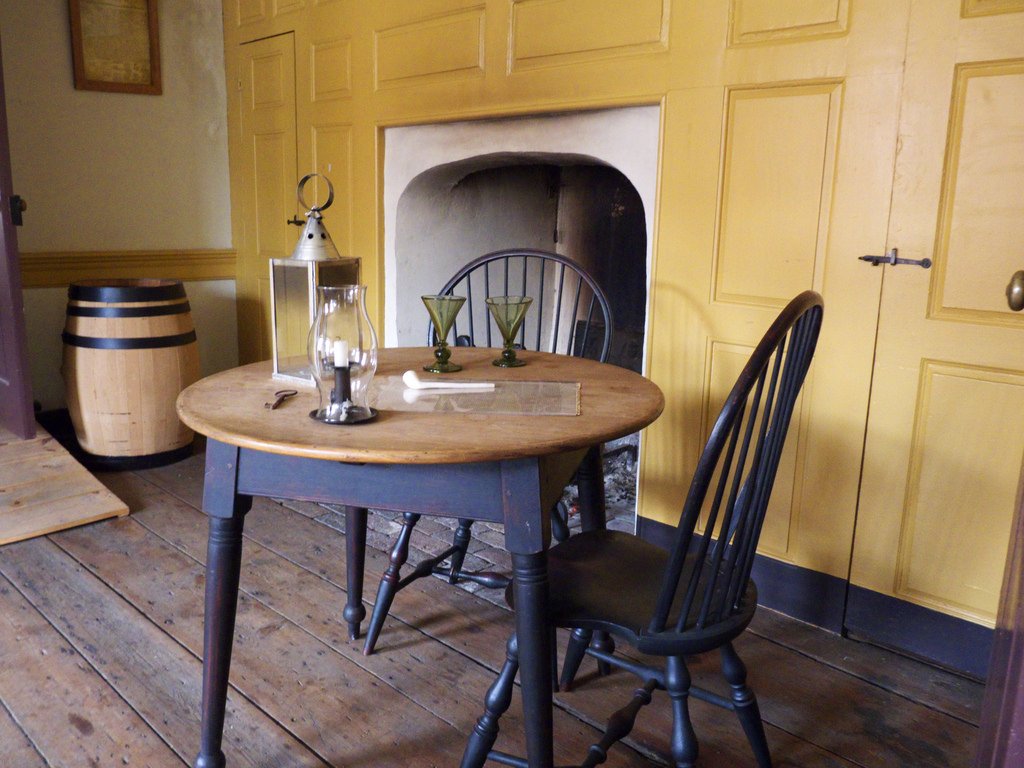 The common dining area inside the Bachmann House. 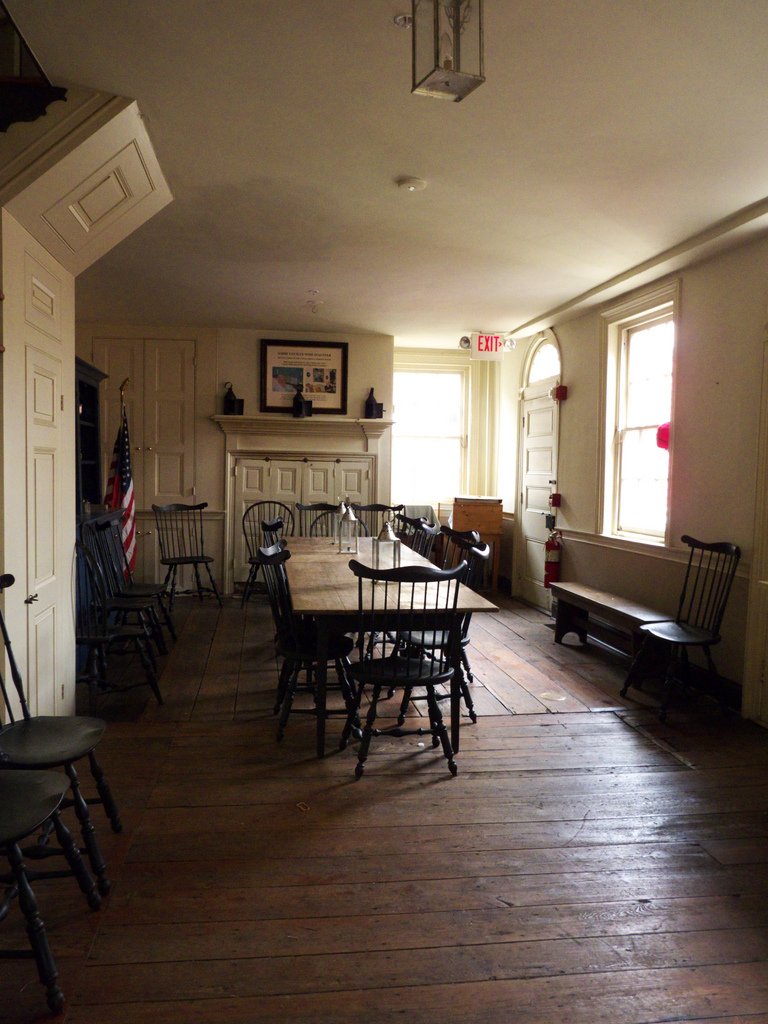 A promotional flyer for a recent dinner theater production. 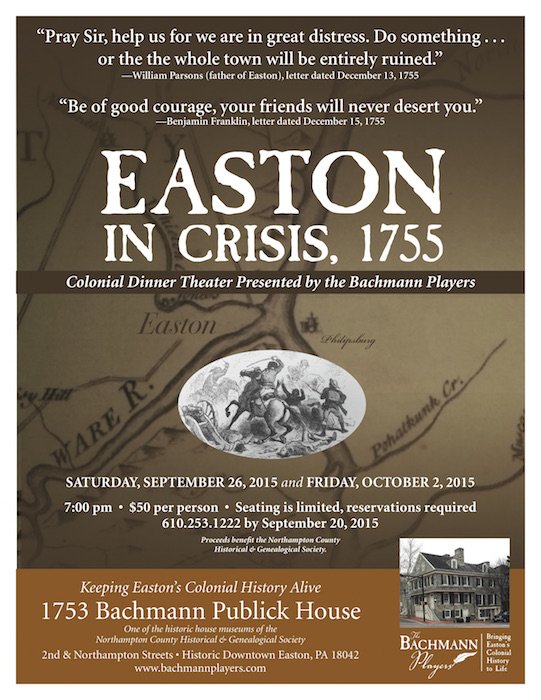 The Bachmanns purchased the land and built their tavern in the same year, 1753.  It is thought that the tavern was Easton’s first stone building as it is a 2.75 story rubble limestone and chestnut timber building constructed in the Georgian style.  Historians believe it served as a tavern from its beginnings as Bachmann applied for a renewal of his liquor license in 1758, the earliest such document in the Northampton County archives.  It also hosted county court proceedings in its large second-floor room until the county courthouse was completed in 1764.

During the French and Indian War (1754-1763) Bachmann’s tavern hosted meetings between the Native Americans and the settlers and was the site of several treaty signings.  Local ironmaster, George Taylor, owned the tavern for a time in the 1760s and local patriots, Jacob Abol and Robert Levers held strategy sessions at the tavern during the American Revolution.  It also provided lodging for at least four Declaration of Independence signatories; George Taylor of Pennsylvania, John Adams of Massachusetts, William Ellery of Rhode Island and William Whipple of New Hampshire.

The tavern was purchased by Taylor in 1761 and expanded in 1765.  Taylor’s innkeeper, Theopolis Shannon, then purchased the tavern in 1779 and it served as an inn as well as a magistrate’s court into the early 19th century.  Additional owners included John Taylor and Edward Nott.  It is believed that Nott constructed its red clay brick addition in 1828.  It then passed through various hands and served as a grocer, tailor, cobbler and apartments through the rest of the 1800s.  From the 1920s through the 1960s it was known as the Blue Moon Café which was a speakeasy during Prohibition.

It was eventually acquired by the Easton Heritage Alliance which began renovations in 2000-2001.  It was then abandoned in 2006.  The county took control of the former tavern in late 2008 and then sold it to the Northampton County Historical and Genealogical Society in 2009 for $1.  Renovations are ongoing and the society restored the building’s porch, walkways, windows and shutters in 2018.  The Bachmann House now hosts various special events, historical re-enactments and is home to the Bachmann Players, an amateur theatrical troupe.  Please call or visit the historical society’s website for event dates and times.

Please call or visit website for event dates and times or for appointment.