This building was originally constructed in 1879 as the Bonebrake Seminary school and was later used as a warehouse for the Dayton school board. In 1943, the Monsanto Chemical Company of Dayton utilized this building to conduct research with the element polonium with the goal of finding how it could serve as the initiator for the atomic bomb that was being developed as part of the Manhattan Project. The building was known as Unit III, and it was one of several sites throughout the Dayton area where research related to the Manhattan Project was carried out. The researchers were successful and work done in Dayton resulted in the initiator for the atomic bomb. Further research related to this project continued at the Mound Laboratory built in nearby Miamisburg, Ohio in the late 1940s.

The building that held Unit III in September 1943. 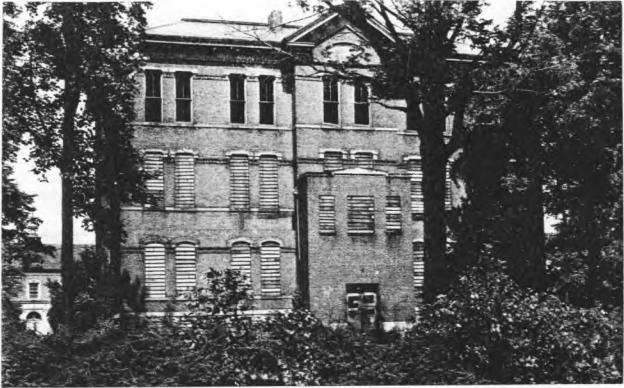 In 1926, the Thomas and Hochwalt Laboratories were established. A decade later, the firm was purchased by Monsanto Chemical Company and continued to perform scientific research on behalf of Monsanto and its clients. The company's chair, Dr. Allen Thomas, met with General Leslie Groves in Washington, D.C. in 1943. General Leslie told Thomas about the Manhattan Project and tried to convince him to help. Thomas refused because he did not want to leave his company in Dayton. After days of negotiations, Thomas headed home where he began work on what would become known as the “Dayton Project.”

The Dayton Project centered around experimenting with polonium and preparing it for use as an initiator for the atomic bomb. Thomas recruited Monsanto employees in September 1943, and they began work at a location on Nicholas Road. As the project grew, other locations were needed, and this original lab became known as Unit I. Because building a new lab was impossible and renting a structure would be too expensive, Unit III was established in the abandoned Bonebrake Theological Seminary built in 1879. The former school needed hefty repairs, including new windows and stairs. By October 1944, it was ready for use as a scientific laboratory.

Work on the Dayton Project required complete secrecy. To obtain equipment, scientists claimed they needed it for the Monsanto Chemical Company, which was known to be involved in government work, or they made something up. Armed guards protected the site twenty-four hours a day. To protect the Dayton area from the ill-effects of radiation, trucks with detection equipment drove around and soil and water samples were tested.

Ultimately, the Dayton Project did come up with a polonium-powered initiator. This initiator was used in the atomic bombs that the U.S. dropped on Hiroshima and Nagasaki in August 1945.