In August 1966, The Compton's Cafeteria Riot marked an important date in the civil rights movement in the United States. The conflict erupted into violence during an aggressive police effort to close the establishment of Compton’s Cafeteria, a popular, 24-hour spot frequented by LGBTQ (lesbian, gay, bisexual, transgender, and queer) patrons. Though largely forgotten, and not holding the same place in queer history as events like the Stonewall Riots in New York a few years later, it was nevertheless an important moment in San Francisco gay history because of the patrons’ violent response. It can be seen as a flashpoint, an eruption after years of conflict, resentment, and community. Compton’s Cafeteria no longer exists. The building remains on-site and at one time housed the Oshun Center - a women’s clinic that offered free care. 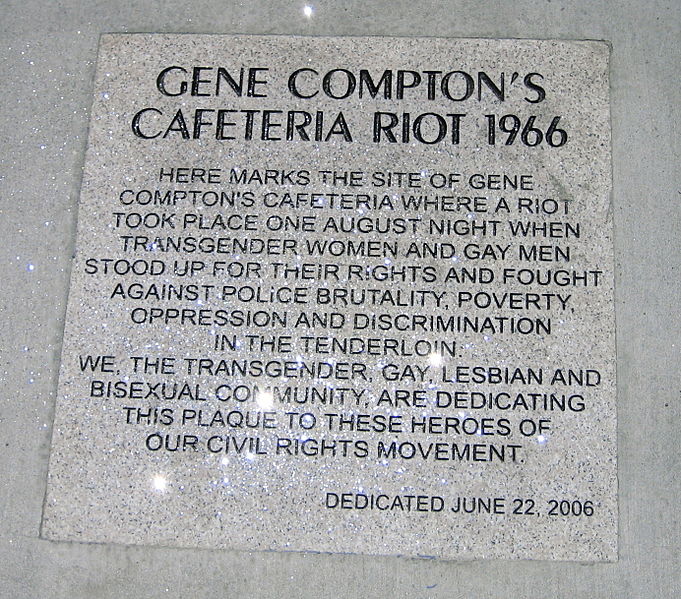 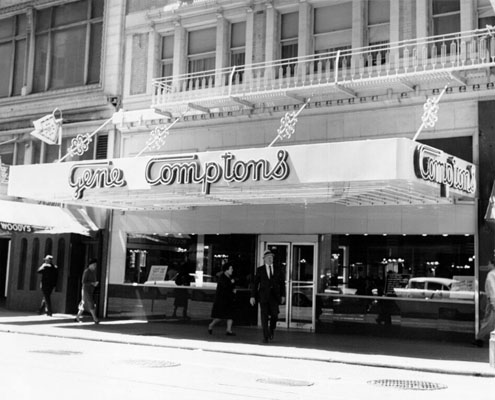 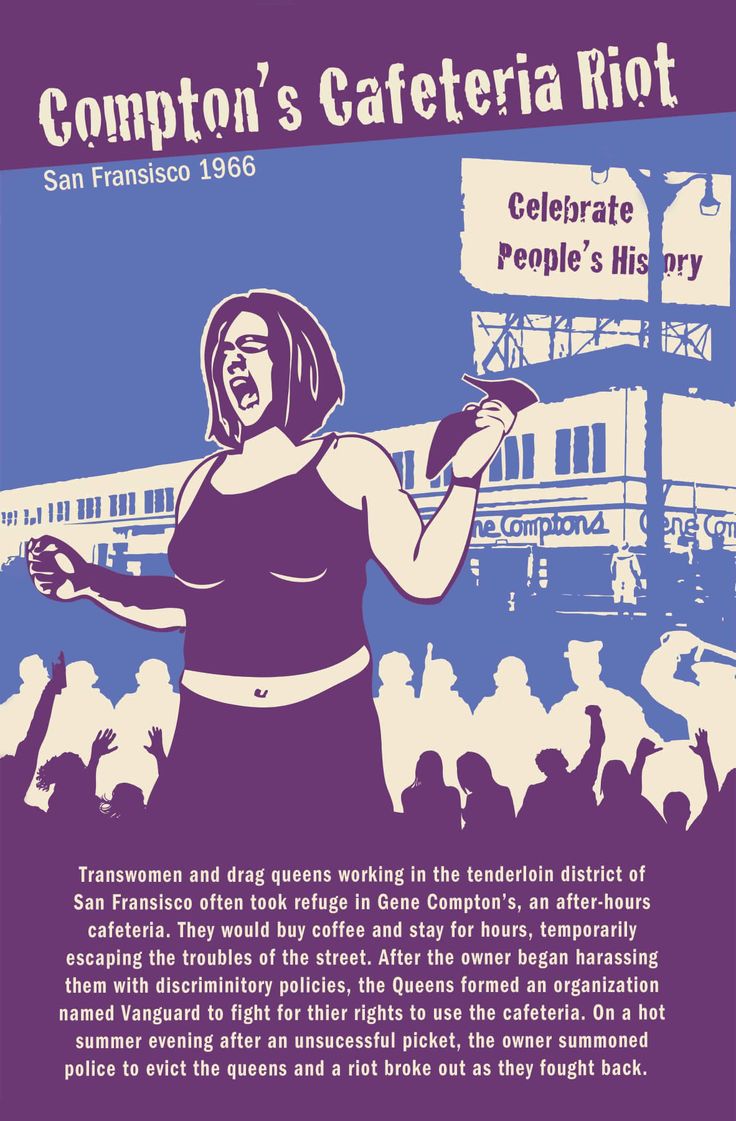 The “Compton's Cafeteria Riot” is sometimes referred to as the “Gene Compton's Cafeteria Riot” because Gene Compton was the owner of the chain of cafeterias. This specific cafeteria, the location of the 1966 riot, was open from 1954 to 1972, in what was referred to as the "Tenderloin District," where prostitution and other “vice” was rampant, but also one of the few places trans people could live relatively openly. On the corner of San Francisco’s Taylor and Kurt, the cafeteria was a haven for queer people, especially transgender and transsexual people. At a time of great change in America, this riot marked this riot marked a key moment in the LGBTQ rights movement in San Francisco, prior to the Stonewall Riots in New York, 1969.

The transsexual and transgender population in San Francisco faced a long history of discrimination and harassment by police and the public. The period from roughly 1954 to the time of the riot at Compton’s saw particular harsh policing of the gay community, with changes in policing and laws that equated homosexuality with prostitution and other “vice.” The 1951 CA Supreme Court case surrounding the Black Cat, a popular gay bar, established that gay people could gather and assemble. The Alcoholic Beverage Commission, though, worked to expand the definition of “illegal acts” to include perceived homosexual behavior, and the police often sent undercover agents into establishments. At Compton’s, many workers and the management were not keen on having drag queens, gays, and the like late at night, and they frequently called the police. Nevertheless, queer San Franciscans long had found tenuous acceptance in the growing culture of gay bars and nightclubs in areas like the Tenderloin, and continued to do so through this period.

On the night of the riot in August, 1966, at a high point of tension in the queer community, as well as anti-war and civil rights activism in the Bay Area, things went differently. The police came to the cafeteria with the intent to close the establishment down by midnight. When the police attempted to close the cafeteria, patrons became aggressive, and one of the queens responded by throwing a cup of coffee at the officer.

Patrons began to throw sugar shakers and dishes, and swing their purses at the police. The windows of the establishment were broken, a police car was vandalized, and a nearby newsstand was burned. The riot continued the next day, with picketing led by a radical queer group called Vanguard. Unlike the response to prior raids and incidents of police violence against LGBTQ San Franciscans in the 30s – 60s, such as the 1965 New Year’s Ball raid, the riot at Compton’s has been called “the first known incidence of collective, militant, queer resistance to police harassment in United States history.” It was the product of years of solidification of the queer community in San Francisco, thanks to the growth of queer nightclubs and establishments and the growth of homophile organizations.

Yet, the Compton’s Cafeteria riot did not become a watershed event like the Stonewall Riots. Homophile activists and organizations in San Francisco, building on the community created in the city’s gay bars and clubs, took up the mantle of LGBT activism during the period 1955-1964, the worst period of police crackdowns. Yet, these organizations tended to consist of predominantly white, relatively affluent or middle-class, older, cisgender gay men, who largely opposed rioting and excluded trans women in their activism. Thus, without their efforts and support, the event did not garner much attention in the local gay press, never mind the mainstream press. Furthermore, these organizations fought for and were able to negotiate and secure many of the freedoms that activists in New York were fighting by the time of Stonewall, making a moment like the Compton’s riot less of a key event. Decades later, historian Susan Stryker began researching the event and talking to surviving people who were involved, creating the documentary Screaming Queens (see link in additional info). The tension between bar-based queer society and resistance, and homophile organizations in 1950s-60s San Francisco, in many ways paralleled tensions between different corners of other movements for civil rights in the United States.

When visiting San Francisco, be sure to view the 40th anniversary marker that commemorates the event at the site of the Compton's Cafeteria Riot.