Penfield Reef Lighthouse is a 19th century lighthouse located just off Fairfield, Connecticut. The lighthouse was constructed in 1874 to mitigate the constant shipwrecks which occurred in the busy, rocky section of the Long Island Sound. The lighthouse is well-known amongst New England lighthouse aficionados for its beauty, unique location, and reputation for being haunted by the ghosts of previous keepers. The lighthouse was added to the National Register of Historical Places in 1990.

A drawing of Penfield Reef Lighthouse from 1914. Note the artist’s depiction of the sea; Penfield Reef was notorious at the time for being home to violent waters and deadly storms. 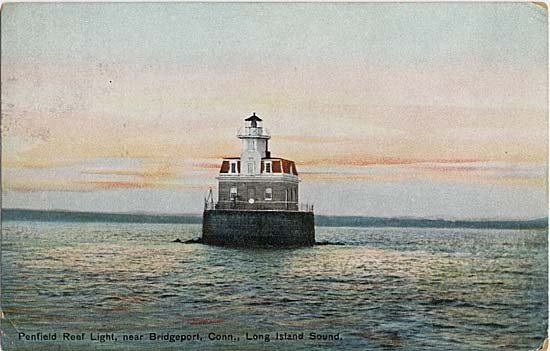 A contemporary view of the lighthouse from up close. The reef is able to be traversed on foot, but can be dangerous during high tides or rough waters. 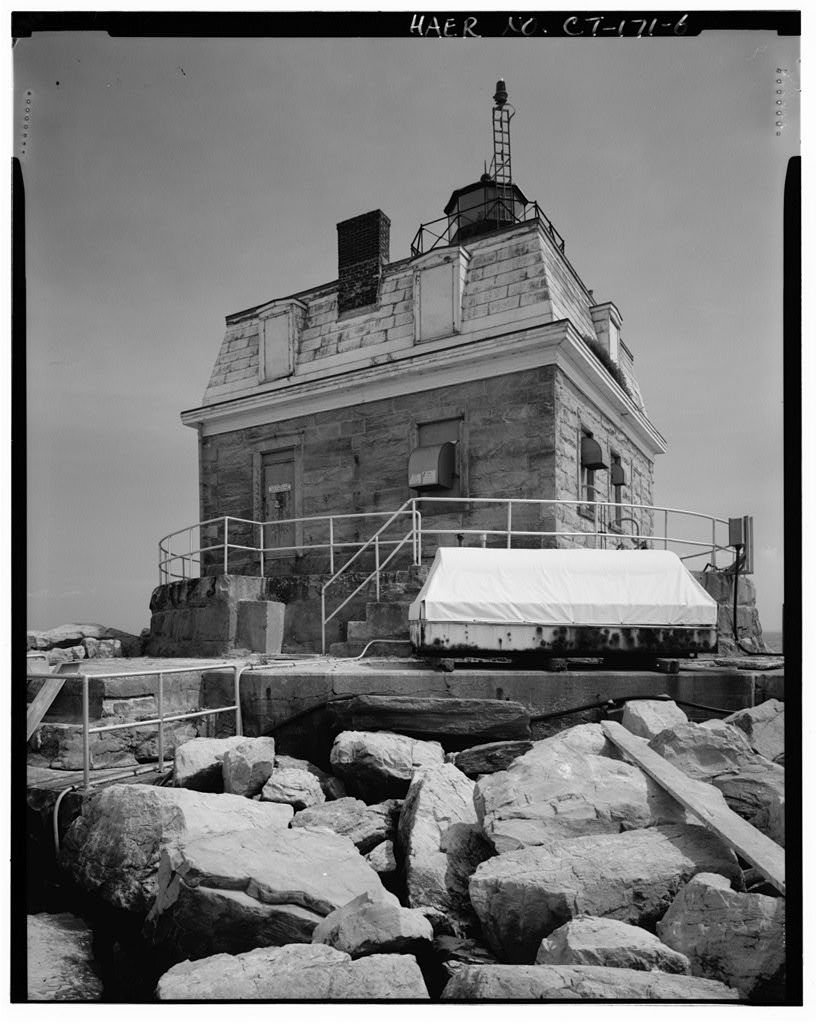 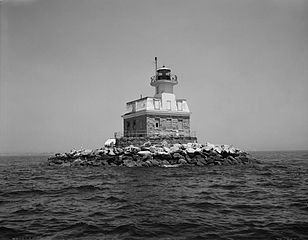 The lighthouse shortly after the completion of renovations in 2014. Penfield Reef saw extreme damage resulting from Hurricane Sandy in 2012, which necessitated repairs costing an estimated $1 million dollars. 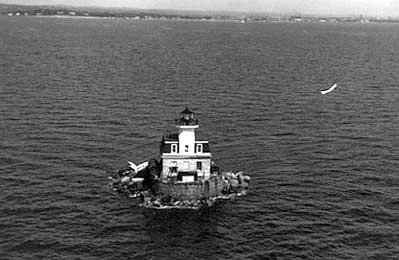 The first floor of Penfield Reef Lighthouse circa 1950. The lighthouse experienced neglect in the mid-20th century before seeing renovations in the 1990s and 2000s. 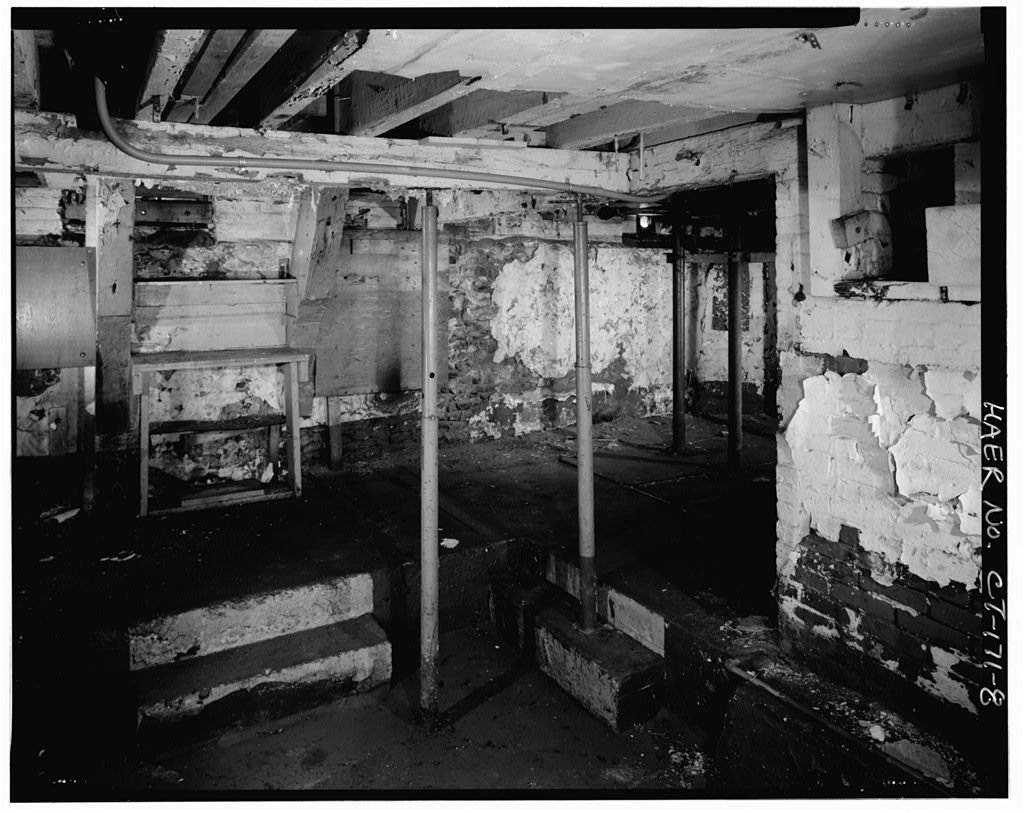 Penfield Reef Lighthouse is located roughly 1.5 miles off the coast of Fairfield Beach, Connecticut. Construction of the lighthouse began in 1868 in response to numerous passenger vessel wrecks in the rocky and foggy area of the Long Island Sound. The region was also beginning to see an increasing amount of commercial ships, leading navigator and lighthouse namesake Benjamin Penfield to remark in 1867, “Vessels are stranded here every year, and our increasing commerce calls attention to something so important for its protection.” The lighthouse was completed in 1873, with the lighthouse beacon first exhibited on January 16, 1874.

The inaccessibility of the lighthouse and the treacherous weather conditions led to constant turnover amongst the lighthouse keepers, who often served for only a year or two before relinquishing their position. Documented tragedies that occurred near Penfield include an 1888 incident where an assistant keeper becoming trapped between two icebergs and suffered body length frostbite; and the death of keeper Fred Jordan, whose boat capsized on December 22, 1916 as he rowed towards shore with the hope of spending Christmas with his family. His assistant, Rudolf Iten, witnessed the incident and tried in vain to save Jordan. Iten’s stories would go on to be the source of the haunted lore which brought the lighthouse fame and notoriety; he and his assistant lighthouse keepers claimed to have been visited by the ghost of Jordan on a regular basis. Iten described a “gray, phosphorescent figure” appearing in Jordan’s former bedroom, then later finding the lighthouse’s logbook mysteriously opened to the entry on the day of his death.

The Coast Guard planned to demolish Penfield in 1969, but the lighthouse was saved by a campaign started by the residents of Fairfield and surrounding areas, who saw it as an important New England landmark. The campaign led to Penfield’s placement on the National Register of Historical Places in 1990. Despite the renewed attention, Penfield suffered from neglect and disrepair, including a rotting foundation which, by the year 2000, had led to a noticeable tilt in the orientation of the lighthouse beacon.

Since 2005, The Coast Guard has attempted to find bidders to assume ownership of the lighthouse, but negotiations with interested parties were thwarted by the complications of state and federal regulations regarding designated historical sites. A Penfield Reef Lighthouse Preservation Committee was established to raise funds for upkeep. Hurricane Sandy caused significant damage to Penfield in 2012, leading to $1 million dollar renovations on the lighthouse, which were completed in 2015. In 2016, the lighthouse was finally sold to a private bidder for $282,345.