This is one of the nearly 350 Calvary scenes created by Mr. Bernard Coffindaffer during the late 1980s and early 1990s. Each setting consists of three crosses made of wooden utility polls. The center cross is larger and painted yellow whereas the others are somewhat smaller and painted blue. The crosses also have nails where the crucified would be hung. Coffindaffer paid for the materials and installation using the profits of the sale of his business. All the crosses are on private property. 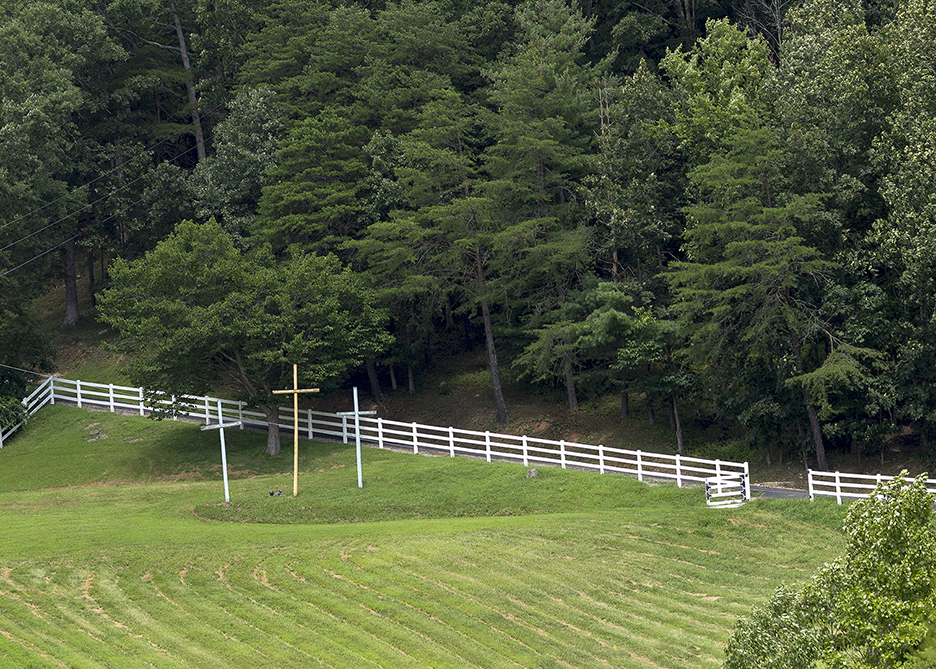 Born in 1927 in Cowen, a small village in Webster County, Bernard Coffindaffer was a bright student who skipped two grades, graduated from high school at 15, and enlisted in the Marine Corps. During World War II, he served in the Pacific Theatre. After returning to West Virginia, Coffindaffer earned a college degree in business from Morris Harvey College (now the University of Charleston) and eventually developed a successful business in the coal industry. Along the way he married, started a family, and became a devout Christian.

According to various reports, in 1984 Coffindaffer experienced an epiphany and felt a Divine calling to create the Calvary sites in West Virginia and across the nation. As he told the story, “I didn't see a spirit. I heard the authority of the voice of God. It was language, but no way was it a human voice. My wife watched me copy it all down at 3 o’clock in the morning” (Fisher, 1987). After selling his business interests, he used the profits to create the nonprofit organization, Cast Thy Bread, Inc., which funded the erection of the Calvary sites, or “Crosses of Mercy” as he called them, on the property of supportive patrons. He also became a self-proclaimed Methodist minister serving seven small churches in Pocahontas County, West Virginia. On September 28, 1984, Coffindaffer installed the first Calvary site atop a hill next to Exit 67 along Interstate 79. The site oversees a large valley and several shopping malls. The goal of this and the many other installations was, as he said, to “remind people that Jesus was crucified on a Cross at Calvary for our sins; there is hope in Jesus Christ; and, that He is soon coming again” (Crosses Across America, 2017). Construction of the sites ended when Coffindaffer died of a heart attack in 1993. His family buried him in Nicholas County near one of his many Calvary sites.

Once he started his project, Coffindaffer found that many in West Virginia were eager to have Calvary sites on their land. Overseeing a small crew of laborers, he dispatched them throughout the state with drilling equipment, utility poles, and paint. Each cluster of crosses was custom made for the setting. Those close to homes and small churches tend to be shorter whereas those in open areas or near the interstate are quite large. The workers notched the horizontal and vertical parts before bolting them together to create a rigid crucifix. Next, the crew drove large spikes into the points of the cross that would have held the hands and feet of the thieves and Jesus to the crosses. Erecting each pole required digging a deep hole and then lifting the cross into place by hand. This task must have been extremely challenging for those sites on high rocky outcroppings with limited access.

Although there are many sites along the Interstate highways in West Virginia, the majority stand along the various state routes and county roads. The actual location varies as well. Some stand near a church, near a house, in an open field, or within a cemetery. Family cemeteries are common in West Virginia, indeed much of Appalachia, as people continue to live on land owned by many generations of their ancestors.

The installation of the crosses was not without controversy. In one letter to the editor, a resident of Charleston opined, “It’s impossible to view the area where the Kanawha, New and Gauley rivers come together without being reminded of God’s presence and majesty. Mr. Coffindaffer’s blue and yellow crosses simply distract from this wonder.” Rosalie Earle, the editor of the Charleston Gazette-Mail, added, “I wish I had the courage to have said it first. Now all I can say is a loud ‘Amen.’ Coffindaffer must not be allowed to move ahead with plans to light the crosses; his vision of hilltops covered by lighted crosses is a threat to West Virginia’s tourist industry.” Other correspondents observed that the crosses evoked images of the Klan and offended minorities and non-Christians (Fisher, 1987). Whatever the opposition, it seems to have had little effect, as the crosses remain intact.

Fisher, M. (2/22/2087). Coffindaffer’s Crosses They Began Appearing in West Virginia in 1984. One of These Mornings You May Wake Up To Find Three in Your Backyard. Washington Post.