Cass Scenic Railroad State Park is in the mountains of West Virginia. The town of Cass itself looks much like it did years ago when it was busy with lumber companies and a paper mill. The old company houses have since been remodeled and are available for vacationing. You can also spend some time in the country store and museum or at the train depot. Steam locomotives still operate and are available for rides through some of the beautiful scenery of West Virginia.

A beautiful picture of the train weaving through West Virginia hills in the fall. 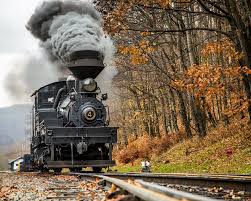 An old picture of the train station sometime between 1908 and 1922.

Originally founded in 1901, the town of Cass has seen much change over the last one hundred or so years. Initially built to house loggers working in the area, the railroad that the town is famous for began construction in 1901. By 1942, operations in the area were sold to Mower Lumber Company, which in turn ran the area until July of 1960. In that month, the mill and railroad were both shut down due to a rapid decline of the timber industry.

In 1961, Cass was incorporated into the state parks system. By 1977, the company town was also made a part of the parks system, seemingly making the whole area into one park. Over the years, the railroad was turned into a line for tourism and the community was repaired and restored for use as a tour site. Today, the railroad is once again in use, but is now managed by the Durbin and Greenbrier Railroad.

Cass still has that old town charm as a former lumber town. The original logging company houses are available for rental by tourists. There is an old company store and museum that is available for touring and for gifts. The museum is open to any train enthusiast to walk through and see the train’s items on display. There are also picnic and RV areas available for rental as well.

You can't go to Cass and not take a ride on a steam locomotive. There are different options available as far as trips offered. There is a two-hour ride to Whittaker Station, where you can tour a reconstructed logging camp and camp car. A longer trip will take you to Cheat Mountain and West Virginia's third highest point, Bald Knob, or Spruce, an abandoned logging town site.

Cass Scenic Railroad State Park has different events throughout the year, including a Halloween train ride. The park is located near the Greenbrier River and the Greenbrier River Trail which means there is plenty to see and do in the area. Cass Scenic Railroad State Park is one of West Virginia's most popular tourist destinations and is one of America's only authentic operating museum of lumber railroading.

Train Season begin in May.