Historical Society of the Tonawandas

The Historical Society of the Tonawandas is located inside a historic 1886 New York Central Railroad station. The building served as a depot until 1922 and has served as a museum and library since 1964. The historical society welcome visitors and offer rotating museum exhibits as well as a local history and genealogy library with archival materials such as photographs, census records, and manuscripts. The museum grounds feature a monument to Civil War soldiers and sailors and a commemorative garden dedicated to veterans of WWI.

The Historical Society of the Tonawandas is located in this historic 1886 train depot built by the New York Central Railroad. 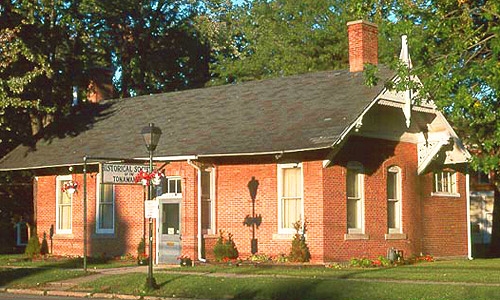 The depot was designed in the Steamboat Gothic style and included many interesting artistic elements such as wooden carvings depicting squirrels and ivy. The depot also a carving of a man playing a flute with squirrels running around his feet. The station served Tonawanda for several decades until 1922, when passenger service ended. By that time, the area had become too congested with trains, pedestrians, and cars. Trains frequently blocked intersections, slowing everyone down. This situation led the railroad to lay new tracks away from the city streets in 1917.

The station was used for a variety of purposes in the years that followed. It became an American Legion Post, a temporary school, and a public library. The Historical Society acquired the building in 1964 and it has been a museum ever since.

Photo: Historical Society of the Tonawandas