The Nacogdoches Railroad Depot was built by Southern Pacific Railways to replace the original wooden depot and opened on April 3 of 1911. The wooden depot was built in May of 1910 and burned to the ground less than a year later, after it was struck by lightning. The railroad depot is the only surviving passenger station on the old Houston East and West Texas rail line. The first train passed through Nacogdoches in 1883, bringing with it a number of changes. After World War II, cars became more common, indicating a decline in the need for the railroad, and in August of 1954 Southern Pacific terminated passenger services through Nacogdoches. The depot was listed on the National Register of Historic Places in 1992.

The Southern Pacific Railroad built the Nacogdoches train depot in 1912. Recently restored, it is now home to the SFA Center for Regional Heritage and features rotating museum displays. 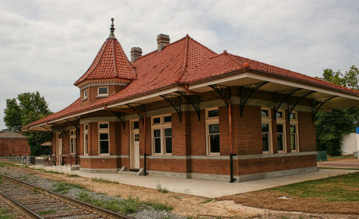 Future plans for the depot include a museum depicting the importance of all transportation in the early development of Nacogdoches.