The Bigelow house, originally located at the southeast corner of New Rd. and Smith Rd., was a part of the 366 acre Ransom Creek Farm. Built in the 1840s by Henry Bigelow, it was inhabited by his farm manager and his family. The Bigelow house shares the story of a lower-middle class farm family with a special focus on chores and keeping house. 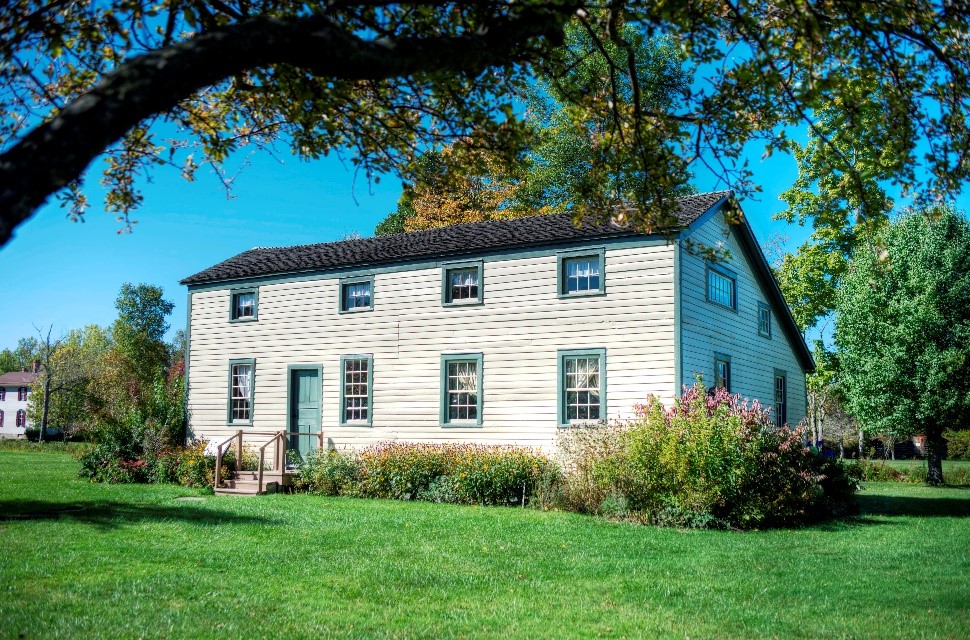 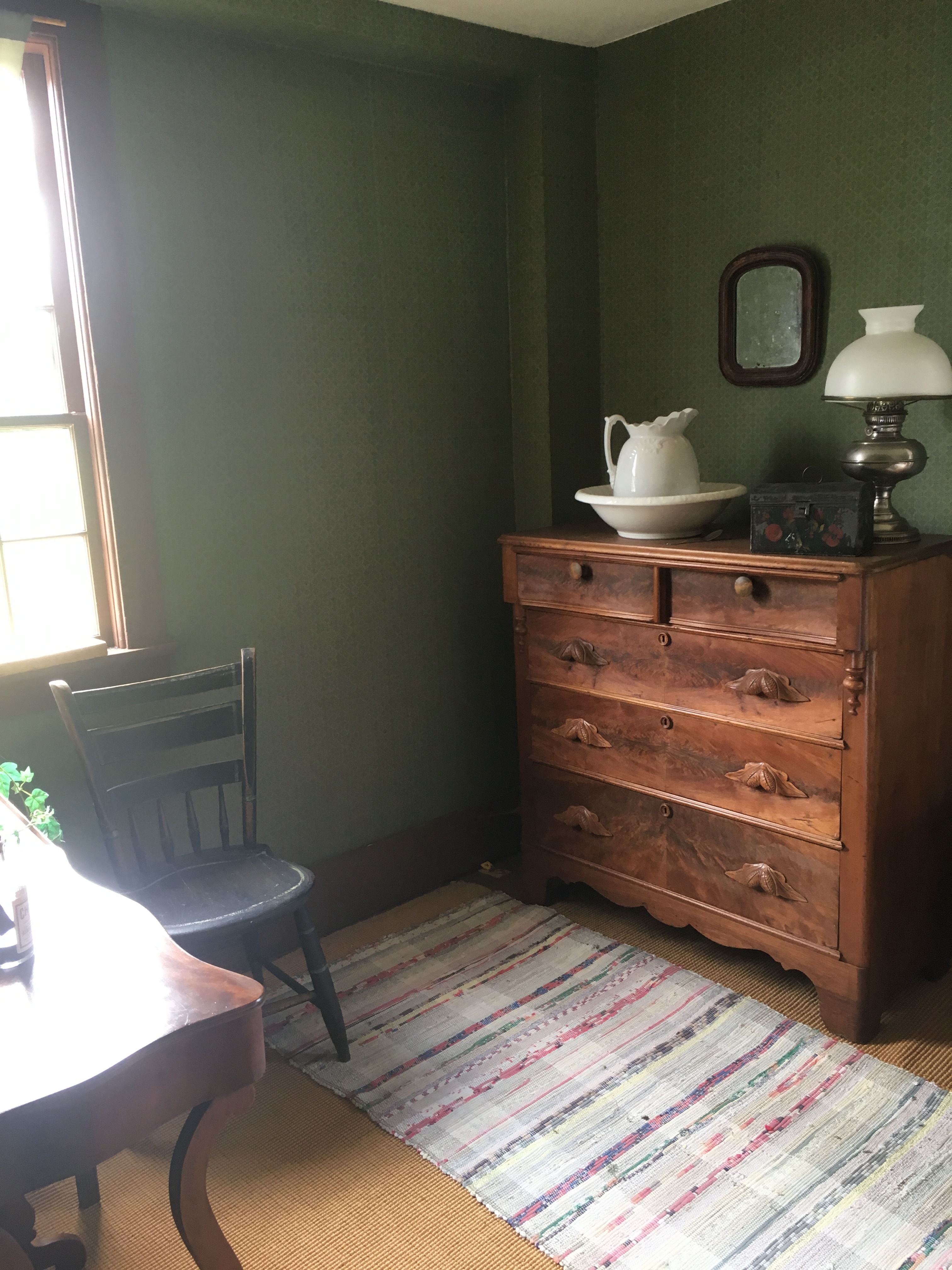 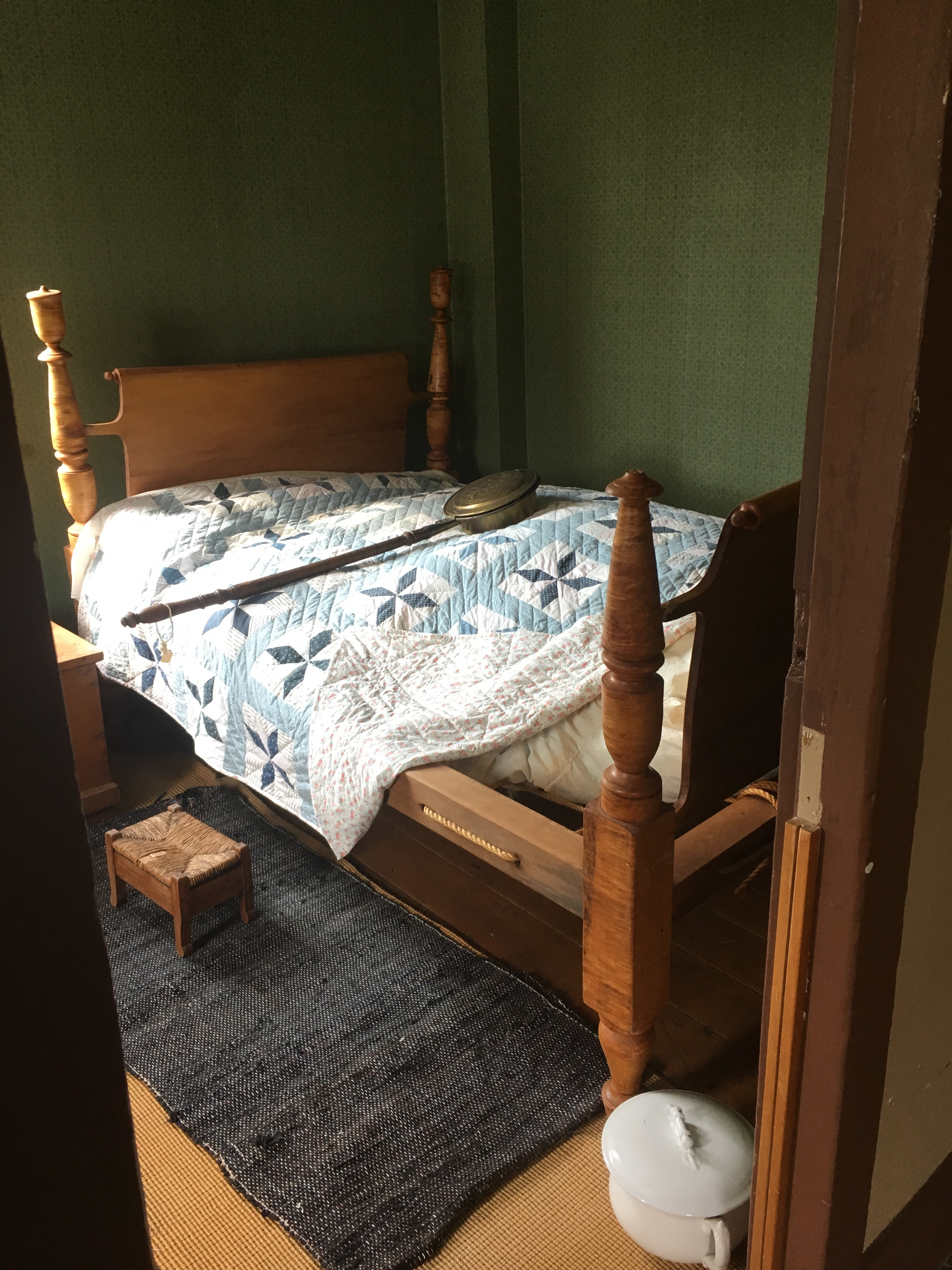 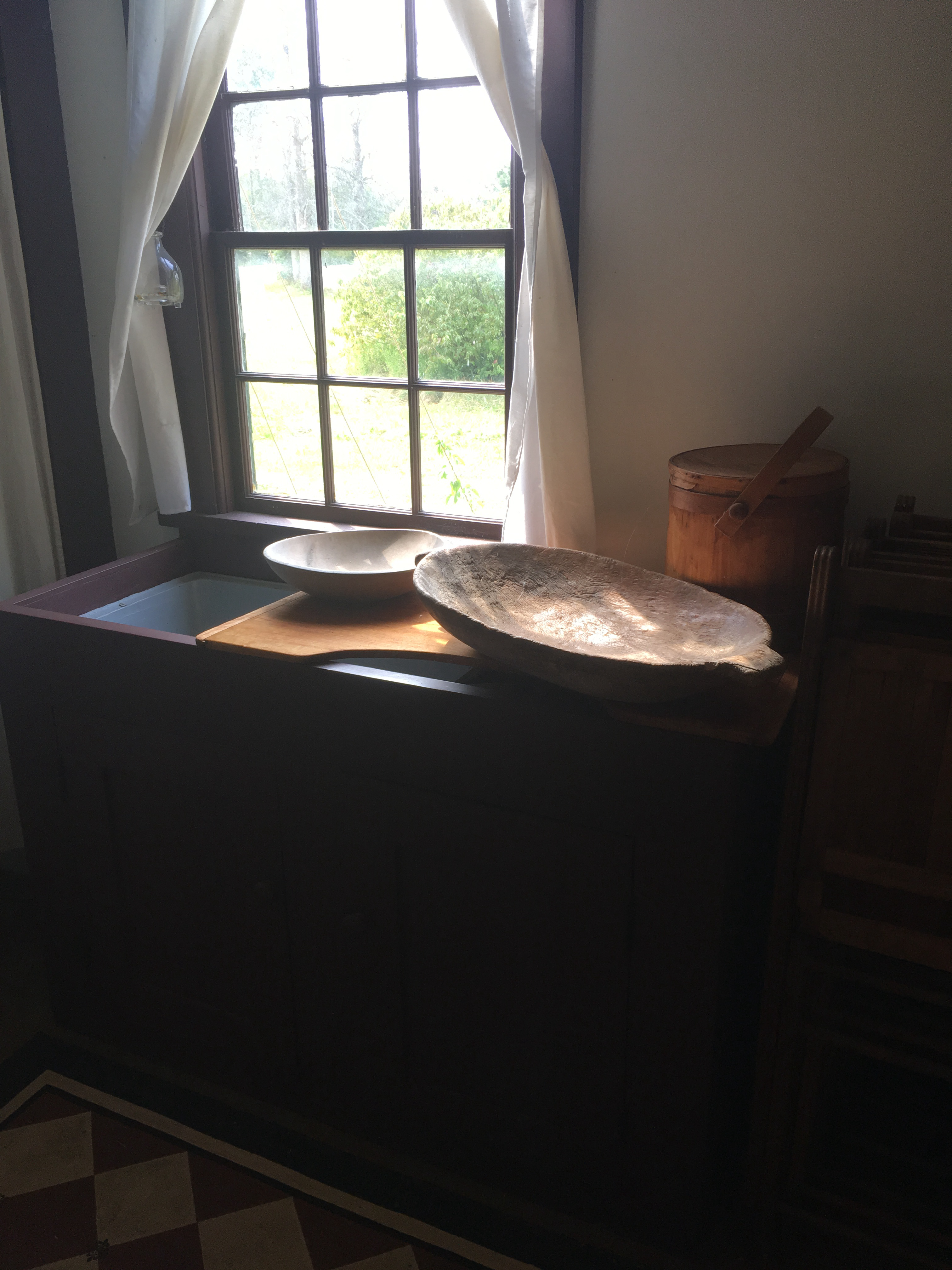 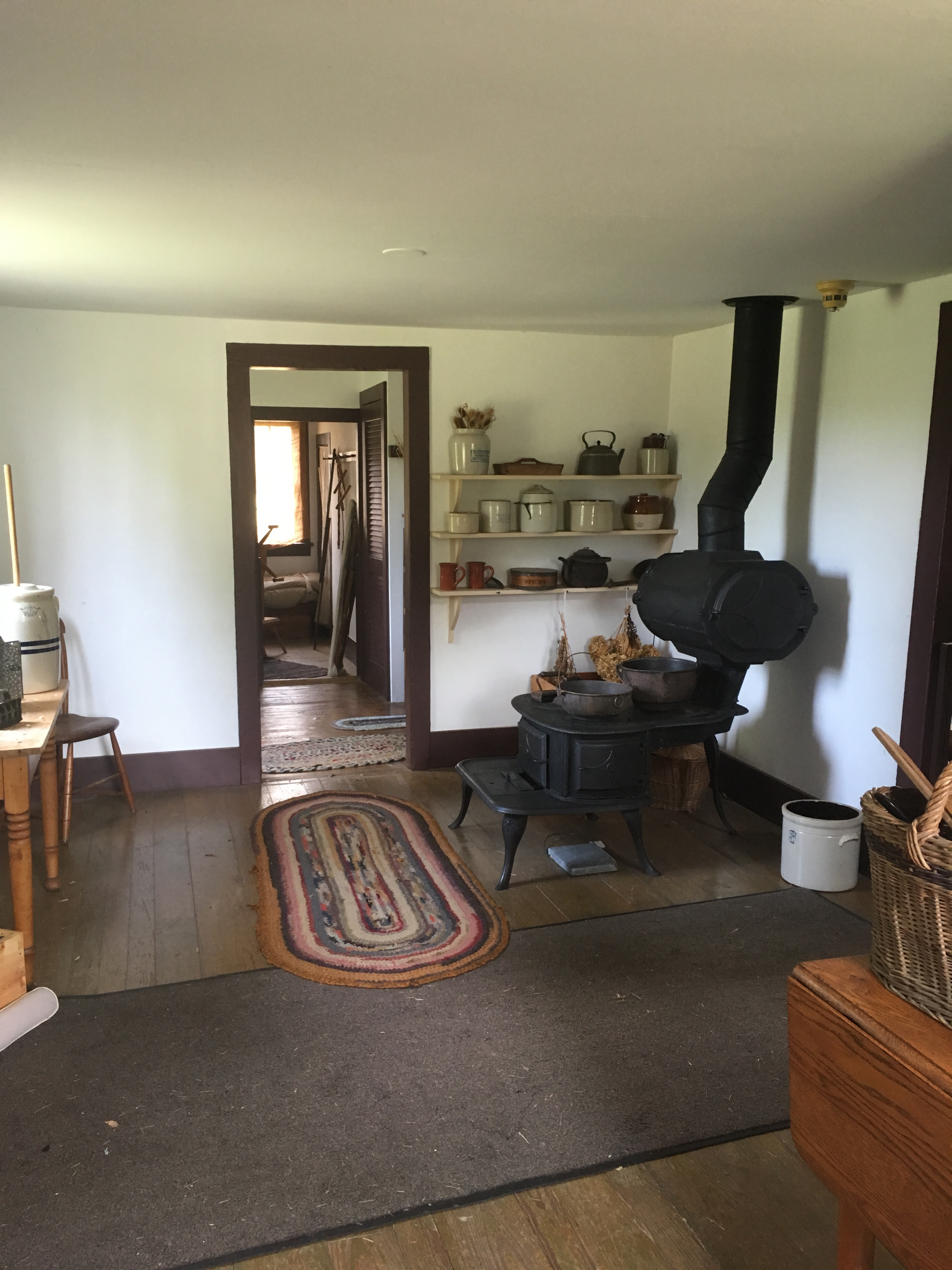 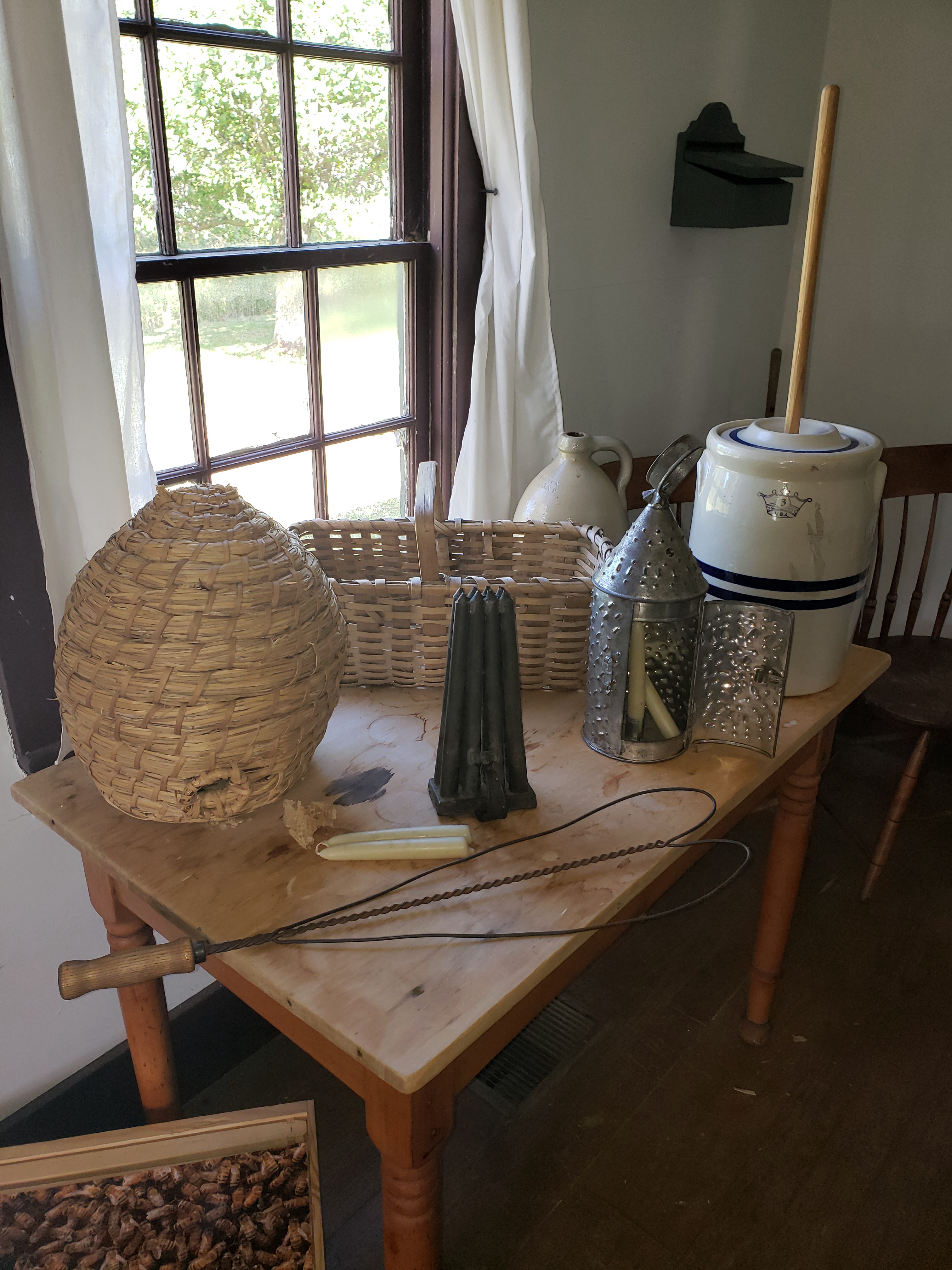 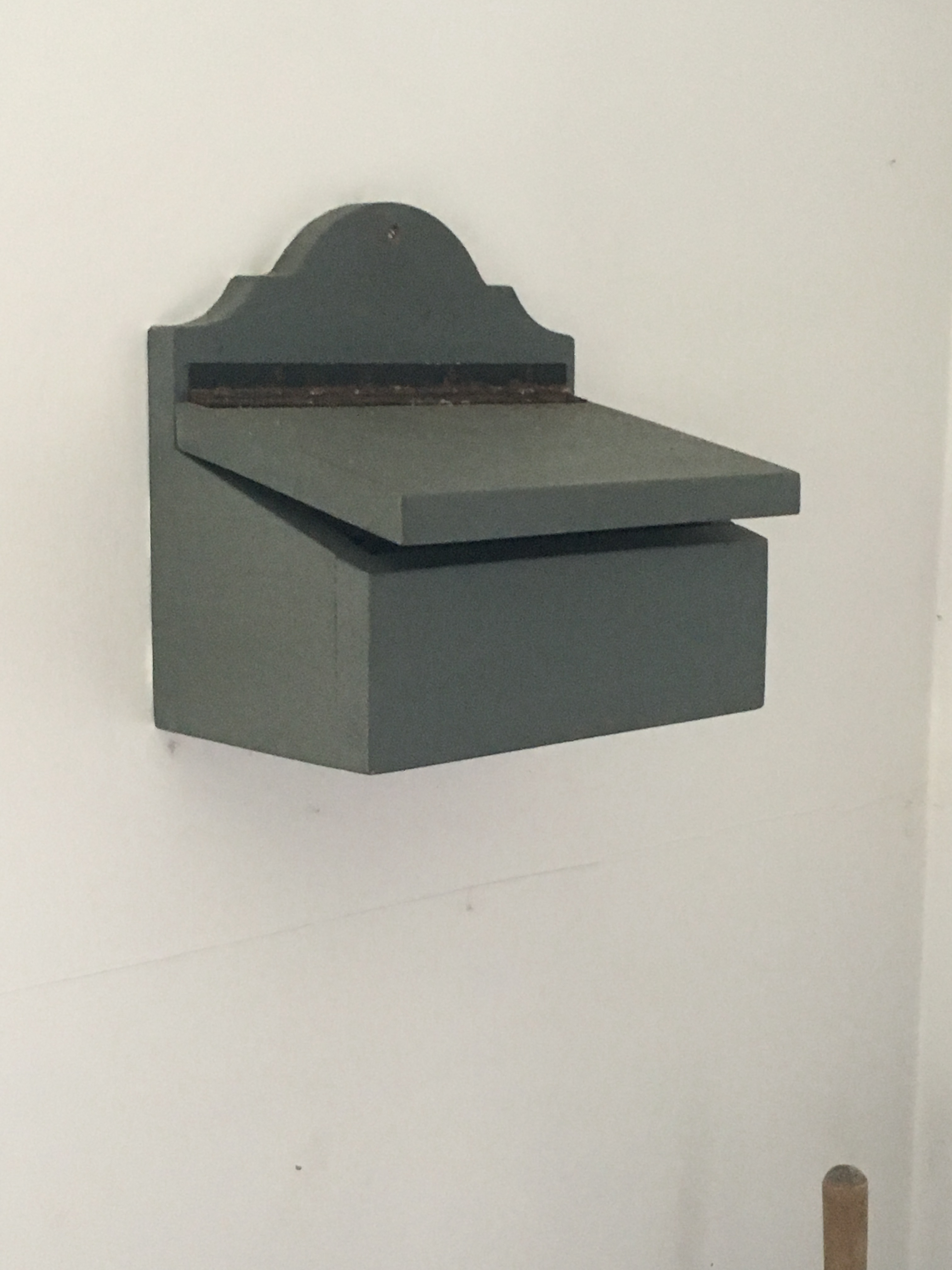 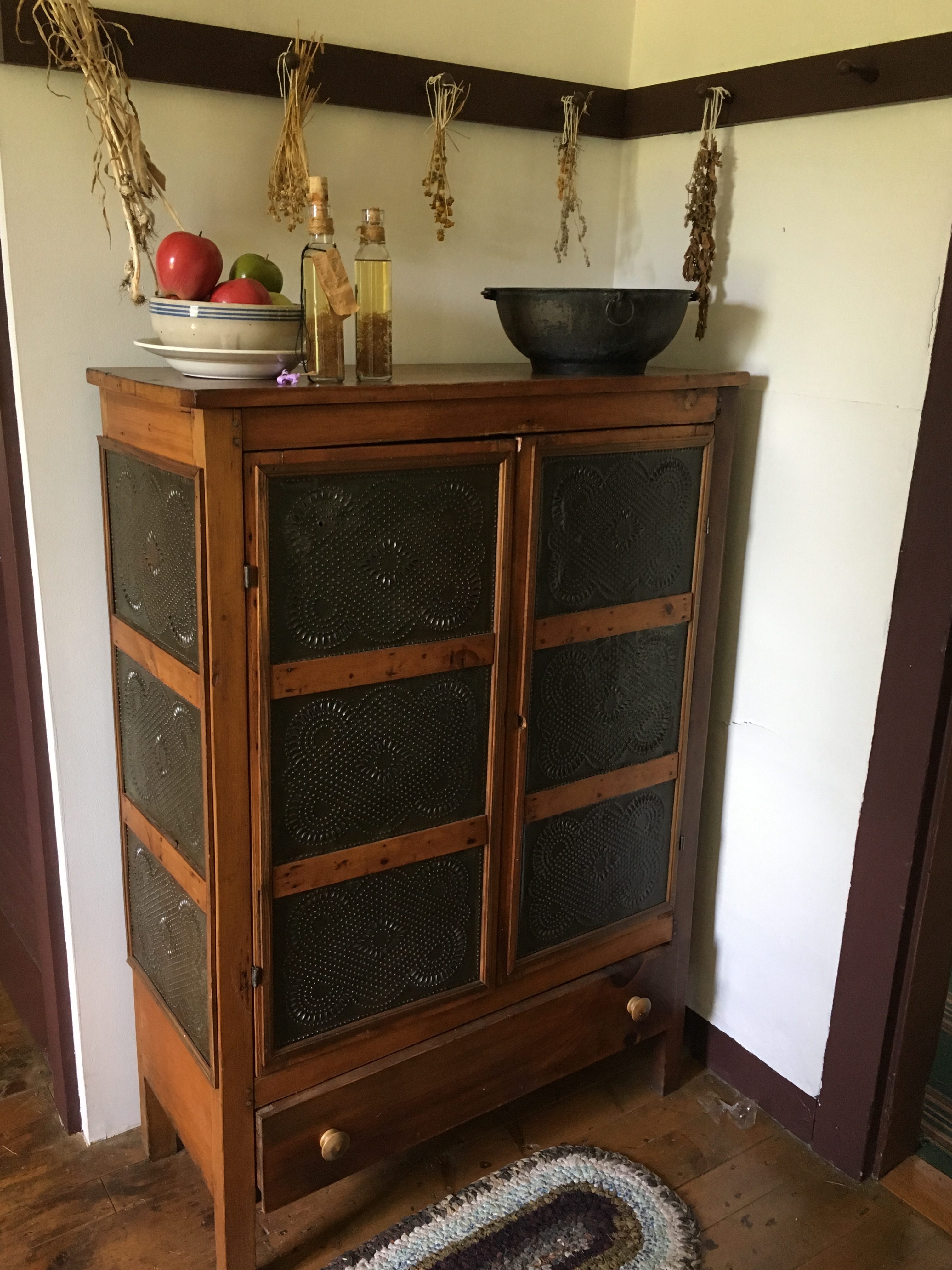 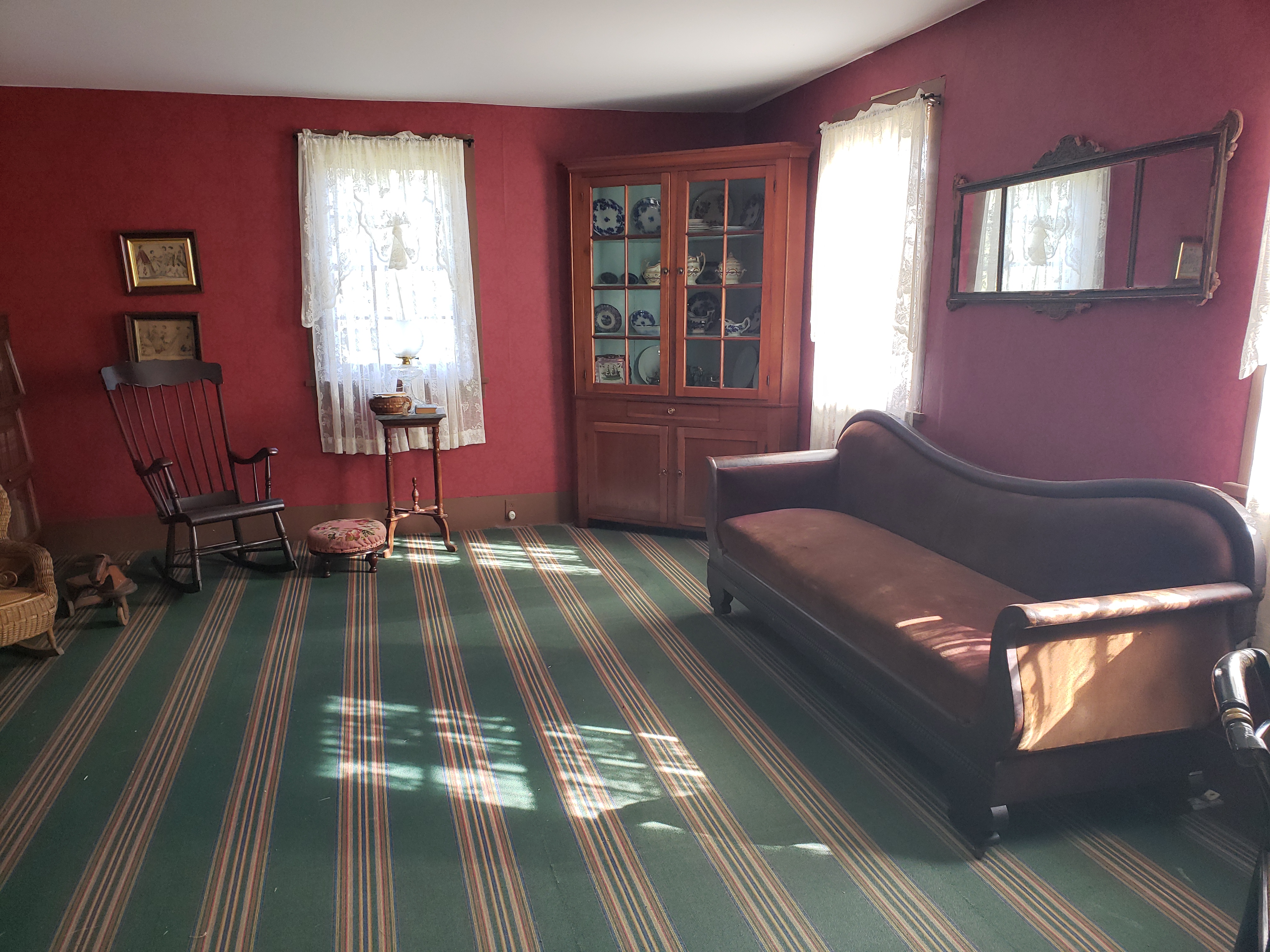 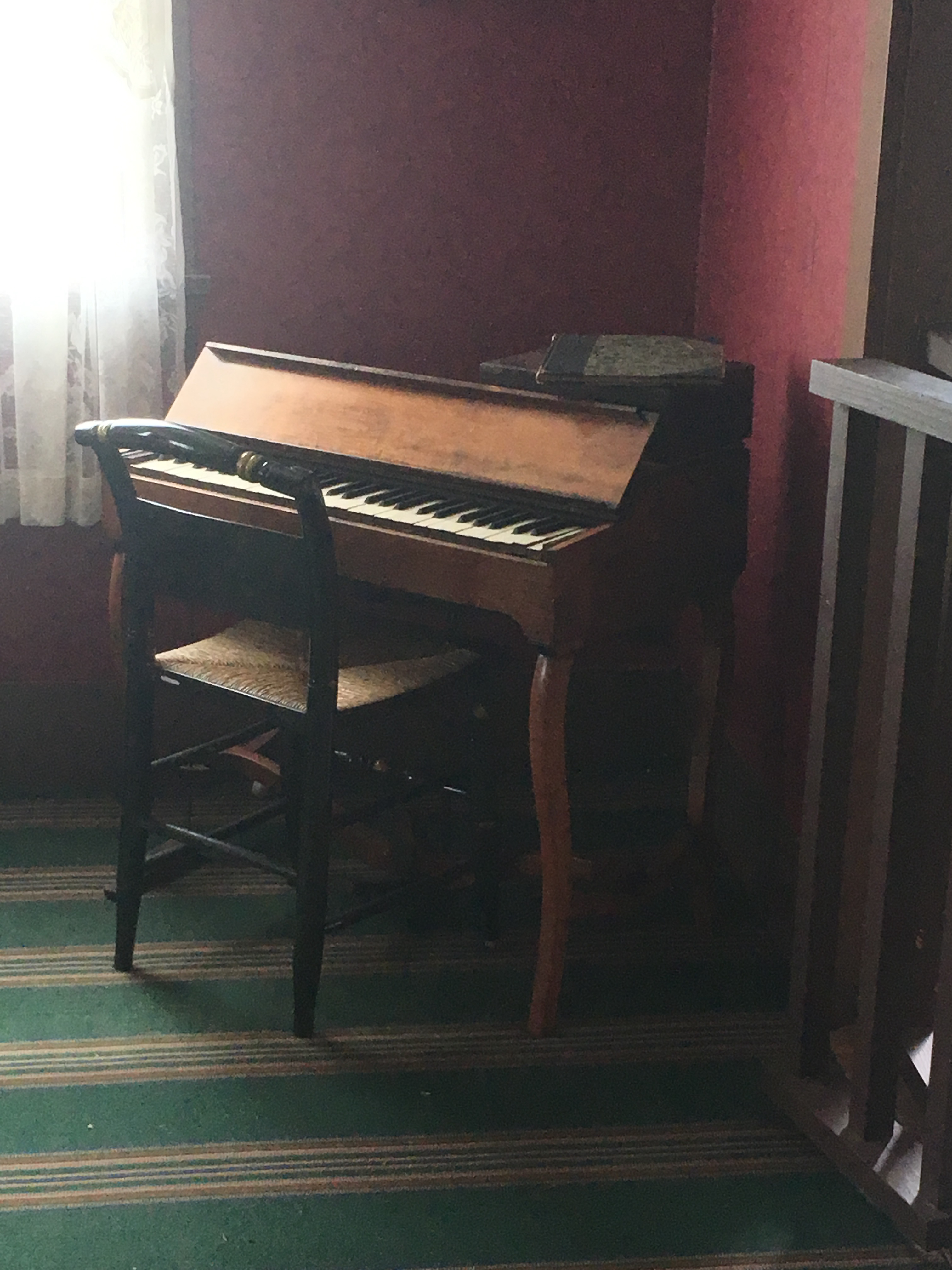 Henry Bigelow built the left side of the house in the early 1840s and the right side was added in the late 1840s. If you look closely at the building's exterior you can see the seam which separates the two sides. Additionally, the 2nd floor was not combined so there are two different sets of stairways to get upstairs, depending on which side of the house you are on.

The Bigelow house is a saltbox house. Saltbox houses are a traditional New England style of house with a long, pitched roof that slopes down to the back. They are generally a wood framed houses. A saltbox has just one story in the back and two stories in the front. The flat front and central chimney are recognizable features, but the asymmetry of the unequal sides and the long, low rear roof line are the most distinctive features of a saltbox, which takes its name from its resemblance to a wooden lidded box in which salt was once kept.

Henry Bigelow was born in 1781 in Conway, Massachusetts. He was the son of Simeon and Sarah Foster Bigelow.

The family moved to Brandon, Vermont where in 1810 Henry married Lucy Barnes. The couple eventually moved to Williamsville, New York in 1821. They were pioneers in Williamsville.

Henry was one of Williamsville’s more prosperous residents. The families’ land holdings were large compared to other families.

Furniture in all rooms is mid 19th century. Although we do not know how all the rooms in this house were originally utilized, the arrangement chosen is based on research and common mid 19th century floor plans.

The room on the left upon entering the house depicts a bedroom used by the parents, and possibly shared with an infant or very young child. There is a pitcher and bowl on the dresser for washing up, a bedwarmer on the bed, and a chamber pot at the end of the bed.

Very similar to the kitchen in the Elliott house, the Bigelows have a dry sink and a step-stove. Look at the items on the table however. Most of them are implements that would have been used for household chores.

There was no refrigeration in the 1800s so butter was something that had to be made frequently, and it was oftentimes a chore that the children in the house did. In the morning the cows would be milked and the milk would be left sitting out. As it sits, it begins to separate and the top layer (heavy cream) is skimmed off. The heavy cream is poured into the churn, the dasher (a stick) is inserted, and the lid is put on. The cream is then "mixed" by raising and lowering the dasher repeatedly. Once the liquid cream solidifies, you have your butter for the day.

Candles were a necessity in the early 1800s as they were oftentimes the only source of light. Candles were not something that had to be made on a daily basis, but were typically made approximately twice a year and it was oftentimes a day long activity. First, the wax had to be heated in a large cast iron pot. Once ready, there were two different ways to make candles. If the family was lucky enough to have candle molds, like the Bigelows, the candle wick would be placed through the mold and the hot wax would be poured into the mold. It would then be set aside to harden. If the family did not own a candle mold, they would have to dip the candles by hand. The candle wick would be dipped into the pot of hot wax and then raised up to harden for a minute or so. It would then be dipped back into the hot wax adding another layer of wax to the wick. This would be repeated until the candle is at the thickness you are looking for.

Laying on the table is a rug beater. There were no vacuum cleaners in the 1800s so rugs had to be taken outside, hung on a line, and beaten with the rug beater to remove all of the dirt and dust.

The thing that looks like a basket is actually a beehive which is called a skep. Humans began domesticating bees Before the Common Era (BCE) and kept them in clay vessels and woven baskets. They would keep bees for both the honey and the wax which they could use for candle making. The problem with this however is that each year the hive has to be broken open and destroyed in order to get the honey and wax out.

Next to the table, on the wall, is a saltbox. Salt was an important because it was used in food preservation. Meats would be heavily smoked and salted so that they would not go bad during the long winter months, and vegetables would be soaked in salt to create a brine and they too would stay good throughout the winter. Look back at the picture of the Bigelow house. Can you see why it's architectural style is called a saltbox?

There is a beautiful pie safe in the storage room that protected not only pies but also breads and cheese. The tin-punch allows the heat to go out but keeps flies from going in.

The parlor is furnished with reproduction striped wall-to-wall carpet and reproduction wallpaper, both typical of the period. There is an elaborate parlor stove, and a rocking chair with sewing implements next to the window for lighting to facilitate this detailed work. In the corner you will see a melodeon.

The young girls in the house may have been trained to play the melodeon. The melodeon was readily available in Buffalo since Buffalo was considered the melodeon capital of the world. The Prince Organ and Melodeon Manufactory was on Buffalo’s West Side. A melodeon is a small pump, reed organ powered by bellows. The girls may have played the melodeon as entertainment for a Sunday afternoon visit from relatives or neighbors. They would have played religious, patriotic and popular songs such as “Listen to the Mockingbird” (1855) by Septimus Winner.