Berger Park is named in honor of Albert E. Berger, a Chicago real estate developer, philanthropist, and a strong supporter of Chicago's beaches and parks. The park is bound by two of the few remaining mansions that once dominated Edgewater, a community that was annexed by Chicago in 1898. Both of these homes, which were built in 1906 and 1910, exhibit the four-square design which was typical of the suburban homes built during the era. The two homes now serve as a cultural center and park facility. 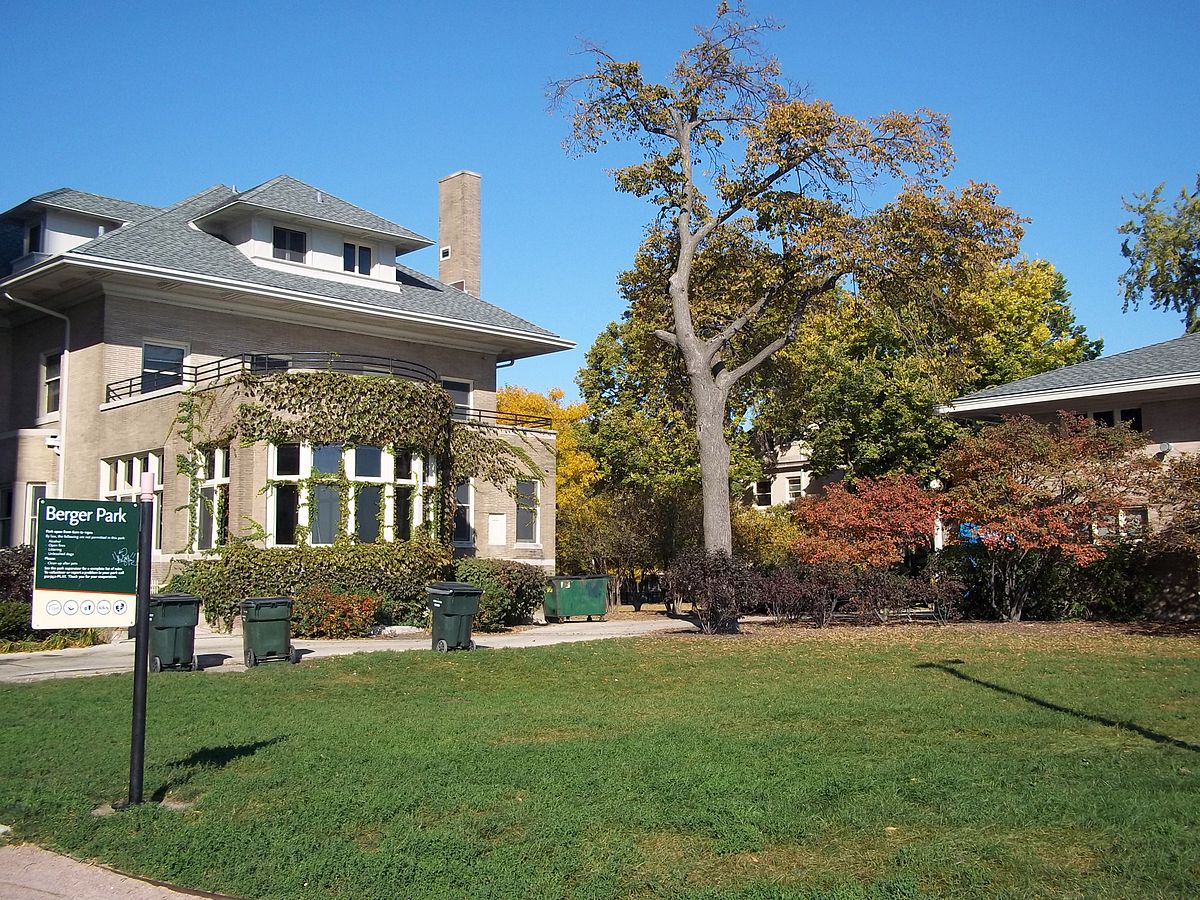 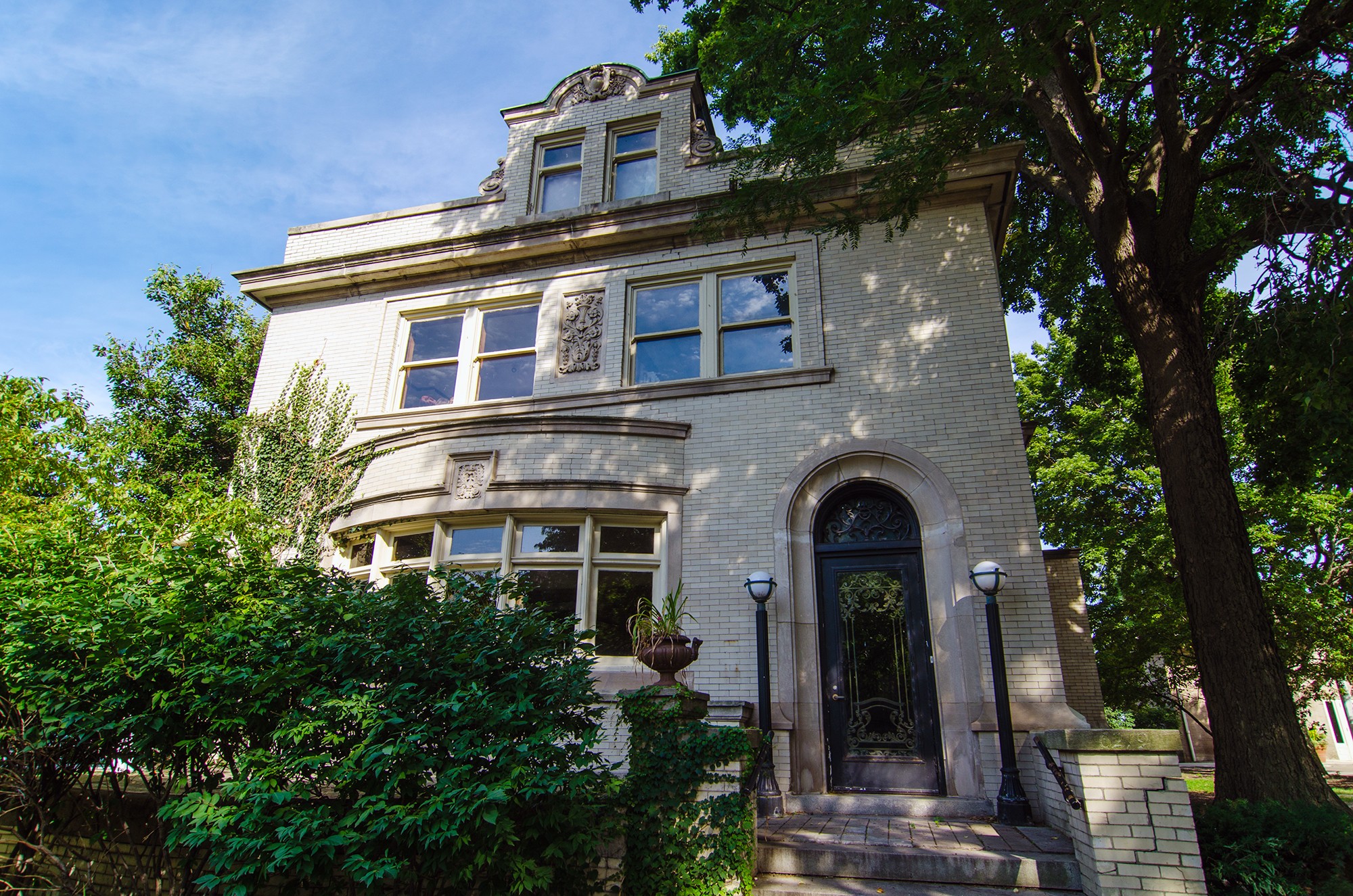 Berger Park Shoreline: Once a beach, the rocky wall was built to protect Berger Park in the 1980s. Photo: Alan Watkins (2015). 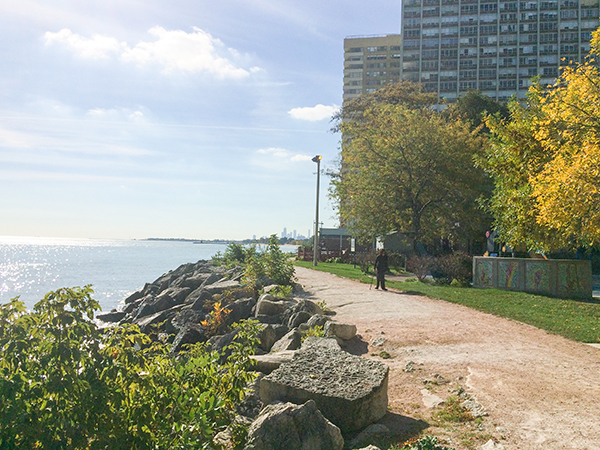 Bounded by two mansions and coach houses, Berger Park is located along Sheridan Road in Chicago's Edgewater community area, a community annexed by Chicago in 1898. The two mansions and coach houses were constructed in 1906 (Joseph Downey house to the south) and 1910 (the North Lakeside Cultural Center, which was initially the Samuel Gunder house). Both houses exist as two of the few remaining mansions that once lined the lakefront in Edgewater, a community known for its wealthy residents. Although these homes dwarfed most suburban houses of that era, the mansions did exude the qualities attributed to the popular American Four Square style, a stylistic movement that shifted Americans away from building overly ornate homes typical of the Queen Anne style.
Although Edgewater once existed as a humble farming community known as the celery-growing capital of the Midwest, the town grew into a community noted for its mansions and beaches. Nicholas Krantz, of Luxembourg, arrived in 1848, and constructed the first known structure in the area, a frame homestead, which he called the Seven Mile House because of its distance from the Chicago City Hall. Edgewater remained relatively rural and sparsely populated until the late nineteenth century.
However, in 1885,  John Lewis Cochran -- known as the father of Edgewater -- purchased a substantial amount of lakefront property in 1885. Cochran had grand plans for the community he purchased, which included subdividing 350 acres, installing macadam streets and stone sidewalks, constructing a drainage system, and installing a modern electrical network that could provide for almost any home built in the community. Indeed, advertisements in the late 1880s noted that Edgewater was "the only electric lighted suburb adjacent to Chicago."
Early Settlers of modern Edgewater, comprised primarily of German, Scandinavian, and Irish immigrants worked in the city and lived in the town, taking advantage of the towns early population boom and modernization that inspired the construction of local railways to connected the community to the Chicago's downtown region, spearheaded by Cochran.  In 1889,  The city of Chicago annexed Edgewater, but the town appeared much like any suburb of that era, demonstrated by its demographics, Praire-Style (four square) homes, and cultural distinctiveness, not to mention its location away from Chicago's congestion.
By the time the second mansion had been built in now-historic Berger Park (1910), substantial brick mansions and coach houses lined Sheridan Road. In keeping with Cochran's original plans for Edgewater, apartment buildings were excluded from Sheridan Road. In fact, Edgewater remained a prestigious community through the first half of the twentieth century. It wasn't until the mid-1950s, and more so during the 1970s, that most of the large homes on North Sheridan Road were tom down and replaced with high-rise apartments.
Both the Berger Park Mansions occupy land that was originally part of John Lewis Cochran's second addition to the Edgewater community.

South Home
Berger Park South Mansion and coach house were built in 1906 by Joseph Downey, an Irish immigrant born in Kings County, Ireland in 1849 and for whom arrived in the U.S. (Chicago) in 1856. He worked as a builder and contractor, eventually becoming a partner in a firm that propelled him into becoming one of the most well known, and prominent, building contractors in the city. Joseph Downey also served as a member of the Chicago Association of Commerce, Chairman of the Buildings and Grounds Commission for the Board of Education, and Commissioner of Buildings and of Public Works.
In 1885, Downey had married Lena Kleine and the couple lived in a luxurious home on Chicago's west side. In 1906, he hired architect William Carbys Zimmerman to design the Edgewater home. The couple lived with Lena's brother Fred, Mary Duggan (servant), Joseph Burke (chauffeur), and a boarder named Elizabeth Burke. They lived left the home before 1920. In 1925, Joseph Downey died in Tacoma, WA.

North Home
The North Lakeside Cultural Center and coach house, was built by Samuel Gunder in 1910. Gunder was born in 1859 in Anderson, Indiana, married Nettie E. Weaver in 1884, and later became President of Pozzinni Pharmaceutical Company. The couple purchased the land for their mansion in 1909. When it was completed in 1910, the couple moved in along with their son Jeane and their servant, Martha Peters. In 1919, the Gunder's sold the home and moved to Los Angeles, California, where Samuel Gunder died in 1925.

Post WWII - 1979
Both homes survived as single-family residences until the 1940s when the Viatorian Fathers acquired both properties. Student Catholic priests serving the Clerics of St. Viator resided there until 1979. When they moved, developers attempted to purchase the property with hopes of constructing high-rise apartments. However, community backlash immediately resulted in efforts to save the land. Hence, The Viatorian Fathers agreed to sell it to the Chicago Park District for a discounted price.

Park Renamed for Albert E. Berger
The park district renamed the park in honor of Albert E. Berger, a native Chicagoan who worked as a tax consultant and as a prominent north-side real estate developer. Today, he is best known for his philanthropic endeavors and his work for civic groups. In 1928, Berger convinced developers that additional lakefront beaches and parks should be developed as recreation areas for children and neighborhood residents. Hence, Chicago's Bureau of Parks and Recreation added beachfront land along Lake Michigan on Chicago's north side in an effort to help meet the summertime recreational needs of Edgewater residents, and that inspired them to manage twenty-seven beaches along the Chicago shoreline.

Post 1985
Nonetheless, the mansions faced another challenge only three years later, when a 1982 conservation report concluded that the Gunder Mansion (North Lakeside Cultural Center) was so badly deteriorated that it was not worth preserving. Thus, the community raised funds to help save the building. In fact, Ronald Berger, Albert Berger's son made a matching donation, which helped to build credibility in their fundraising efforts.
Finally, by 1985, efforts to challenge the viability of the historic sites transitioned to efforts to maintain them, notably when the Chicago Park District requested that the Corps of Engineers fund, design, and construct a stone embankment along 450 feet of the shoreline. The construction of the embankment caused the loss of the original beach but protected and prevented further erosion of the parkland. As well, that same year, the North Lakeside Cultural Center was incorporated as a non-profit arts organization who rehabilitated the Gunder Mansion and subsequently operated it as a cultural center for twenty-five years.
By 1988, the neighborhood had raised $430,000.00 to renovate the mansions, forging an effort to renovate both mansions and return them to their original glory. In addition to the work done on the buildings, the Chicago Park District improved the surrounding landscape.
While the Gunder House continues to operate as the cultural center, the Downey House is now called the South Mansion and functions as a recreational facility for the park

Berger Park Shoreline: Alan Watkins (2015). This image, and others, are found at: https://tclf.org/landscapes/berger-park