This museum is located in the historic Rogers Mansion, a home that has been moved many times and expanded significantly from its first construction in 1648 for the family of William Rogers and Ann Hall Rogers. At that time, many of the inhabitants of what would later become Southampton were religious settlers who had arrived at Conscience Point in 1640, The museum combines historic homes and artifacts with interpretive exhibits and an extensive research library and archives dedicated to the history of Southampton and its surrounding areas. The library currently contains over 800 volumes and the archives include a wide range of subjects from account books to family memorabilia. 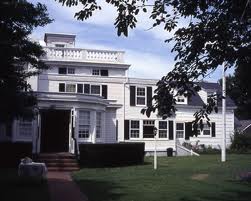 The mansion stayed in the Rogers family for over two centuries. Jetur Rogers, a whaling captain, was the last of the family to own the property. He inherited the house in 1854 and sold to physician John Nugent in 1889. Today, the home is a local history museum that features a variety of permanent exhibits as well as seasonal exhibits.

The mansion grounds offer a glimpse at many historic buildings that are now part of Old Southampton Village - a recreated model village composed of many historic structures collected from different areas of Southampton that were brought to this location. The village includes a 19th-century paint store, a Blacksmith’s shop, a cobbler’s shop, a one-room schoolhouse, and a colonial era barn that was seized by British soldiers to lodge their horses during the Revolutionary War.

Drive from Westhampton eastward to Southampton, stopping at historical museums, mansions, and a lighthouse in between at Quoque and Shinnecock Hills.